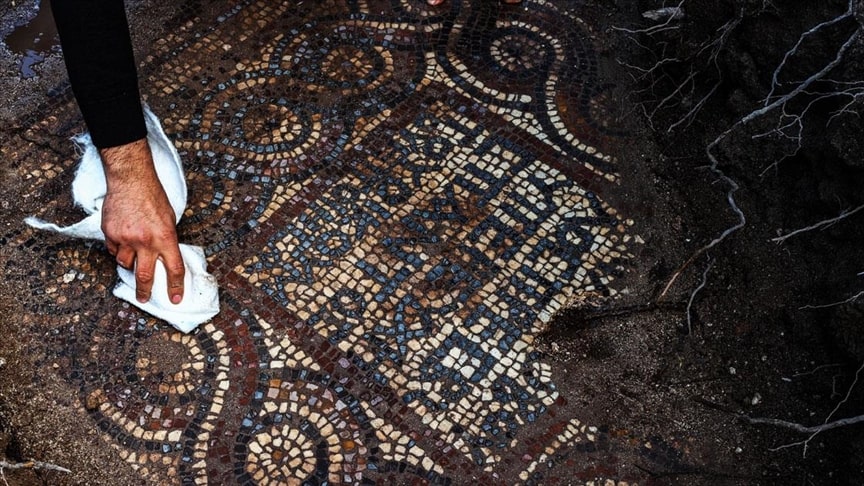 During the illegal excavation operation carried out in Izmir’s Aliağa district, a monastery built during the Roman period and about 1500 years old mosaic were found.

Provincial Gendarmerie Command teams started work upon the notification that illegal excavations were carried out in the mountainous area where there is no means of transportation by vehicle. The teams, which organized an operation to the specified address, caught 2 people trying to take off the historical remains about 2 meters below the ground.

Upon the informing of the gendarmerie, the experts of the Izmir Archeology Museum made an investigation in the region. At the end of the studies, the ruins of a Roman monastery and a 1500-year-old mosaic, which is said to be rare in the world, were found and the region was taken under protection.

The article on the work decorated with ivy motifs, stating that the mosaic was “made by a man from the elders of the church for the welfare of his family” drew attention.

The mosaics will be taken to the museum after the studies. A separate work will be done for the monastery.

“It is a very difficult region to reach”

“This is a mountainous region and very difficult to reach. Upon the notification of the gendarmerie, we came to the area with our experts. We detected the floor mosaics. This place was used as a monastery and has a basilica” she spoke.

Stating that the work is of great importance in terms of archeology, Keser said that after the procedures here, they will carry the mosaics to the museum.

Explaining that they estimate that the monastery was used from the 4th century to the 14th century, Keser said, “The mosaics here are very valuable archaeologically. It is located at a point that can be reached by a tractor from the pathways. This is a universal cultural asset and a rare artifact. We will take the mosaic and bring it to the museum. We thank the security forces for their sensitivity. ” found the assessment.

Hünkar Keser added that the experts will initiate more detailed investigations in the region.