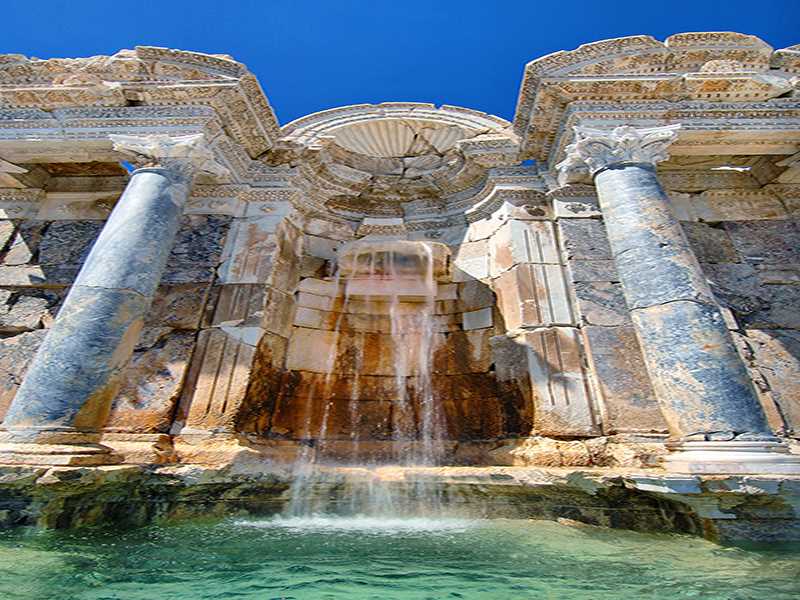 The archaeological site of Sagalassos is a very important and well-preserved settlement located in a magnificent mountain landscape, 7 km north from a village named Ağlasun (province of Burdur, south-west Turkey). Sagalassos is 1,750 meters above sea level.

Sagalassos was the most important city of ancient Pisidia, situated in the Taurus Mountain chain with the Mediterranean Sea to the south and the Anatolian plateau to the north.

Although Sagalassos appears to be a great Greco-Roman settlement, its origins can be traced as far back as the Hittites (1300 BC), who referred to the city as Salawassa. The early settlers preferred a fortified location on the upper mountain slopes. Despite the elevation, the city is kept warm by the fact that the chosen location faces south, while winters here are still cold.

When Alexander the Great came to conquer the area in 333BC, the people of Sagalassos fought back valiantly before succumbing.  It is believed that Alexander had the Heroon constructed in his honor at this time.

Sagalassos passed from ruler to ruler after Alexander’s conquest, until it, like the rest of the region, fell under Roman influence. This was the wealthiest era in the city’s history, and many of Sagalassos’ finest monuments were constructed during this time. Emperors were honored with colossal statues, and Hadrian had the magnificent theatre built on the hill above the capital.

After centuries of Hellenization and Roman rule, Sagalassos underwent a third significant transformation in the fourth century: the city became Christian. Significant administrative changes followed, and construction work resumed began at the end of the fourth century following a roughly 235-year hiatus. The city’s elites were less interested than before. From the fifth century on, Christianization widely influenced the architecture of Sagalassos.

About 400AD, city walls were built, signaling an increasing danger of invasion. A series of earthquakes proved to be the largest threat to the region, and a massive earthquake in 590 effectively ended the great city. Sagalassos was deserted though small settlements remained in the region (near the city and down in the valley).

At the same time, the neighboring town of Ağlasun also developed. Sagalassos survived today in Ağlasun, and its name comes from this ancient city. Ağlasun was founded in the Selçuk dynasty in the 13th century when caravanserai and hamams were built near the current city square. It was a booming center in the 16th century when it hosted a regional market.

The city has been excavated since 1990 by archaeologists from the University of Leuven in Belgium.

Among the impressive finds are a beautifully intact theater built by Emperor Hadrian, many ornate fountains (Nymphaeum), the most impressive of which is the Antoninskaya Fountain in the upper agora, and the Heroon, or hero statue, built overlooking the city. these are the remains of the Roman baths, the markets, the bouleuterion (council theater), and the colonnaded streets overlooking the valley far below. The signage in Sagalassos is excellent and very informative, so you will easily be able to find out which monument is which and what the story behind it is.

The site has a huge Roman bath, a library, a city mansion with more than 80 rooms, and a theater that can accommodate 9,000 people, as well as other monuments of the city that are 1,000 years old.

The excavated finds have been exhibited in the Burdur Museum.

How to get there

Head east from D650 (Burdur highway in Antalya) (from the south, follow the D685, from the north to the Burdur Ağlasun highway), to the town of Ağlasun. In the town, you will see signposts that will guide you uphill through the town and north through the mountains to the Sagarassos.

If you don’t have a car but still want to visit Sagalassos, you can take a coach bus to the cities of Burdur or Bucak, from where you should be able to catch a minibus to the village of Ağlasun. From Ağlasun, you can take a twisting 7.5-kilometer trek up the mountains or try to find a taxi in town.

Turkish Ancient Cemetery will be İntroduced to the World

We would not be exaggerating if we say that Ahlat, which is a naive district of Bitlis on the shore...