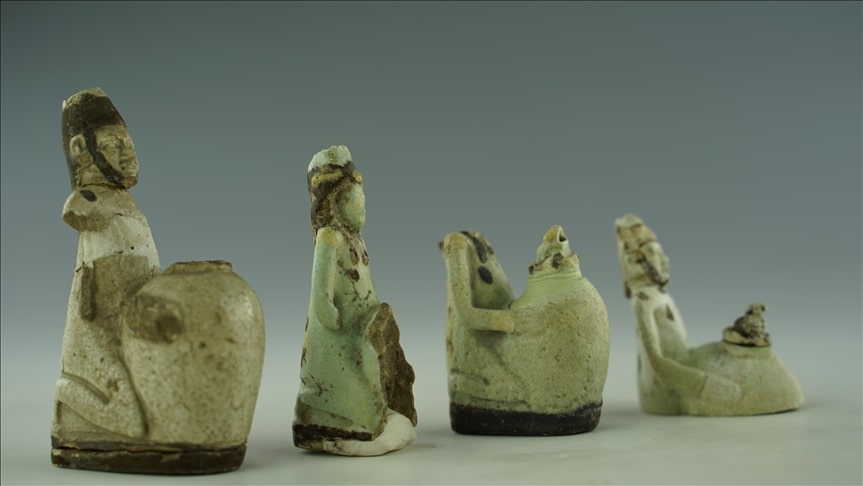 The 2,700-year-old  fragrance containers reflecting the ancient Egyptian culture are exhibited for the first time in the private treasure room of the Izmir Archeology Museum.

The vessels unearthed from the excavations at Bayraklı mound and Phokaia Athena Temple reflect the Egyptian culture of the archaic period with their extraordinary forms an impressive yellow, green and brown colors.

It is estimated that fragrance containers were made in the 6th or 7th century BC and reached Anatolia as a result of trade relations between Egypt and Ionia.

Symbolizes the coming of Hapi

The vessels symbolize the fertility of the Nile River, one of the most important elements of the formation of ancient Egyptian culture.

The palm crown in religious ceremonial vessels used for precious oils or Nile water is thought to symbolize the Nile River and Hapi in Egyptian mythology, which characterizes fertility.

The frog figure on the storage container is also one of the symbols of the fertility goddess Heket.

Next month, the Middle Chalcolithic Period Kilia Type Idol-Stargazer (Cyclops-sky watcher) will be exhibited as part of the project.

The June guest of the project will be the Temple Model of Artemis from the Hellenistic period, and the guest of July will be bronze strigilis (cleaning spoon) from the same period.

Figurines accompanying the Hellenistic spirit will be exhibited in August, Egyptian figurines dating to the archaic period in September, an oil bowl depicting the Achelous from the same period in October, a woman’s Proton grave gift from the classical period in November, and a cuneiform tablet from the Bronze Age will be displayed in December.

The working hours and days of the museum, which is open to visitors 5 days a week, may vary due to the epidemic, and the necessary information is shared on the website of the institution.