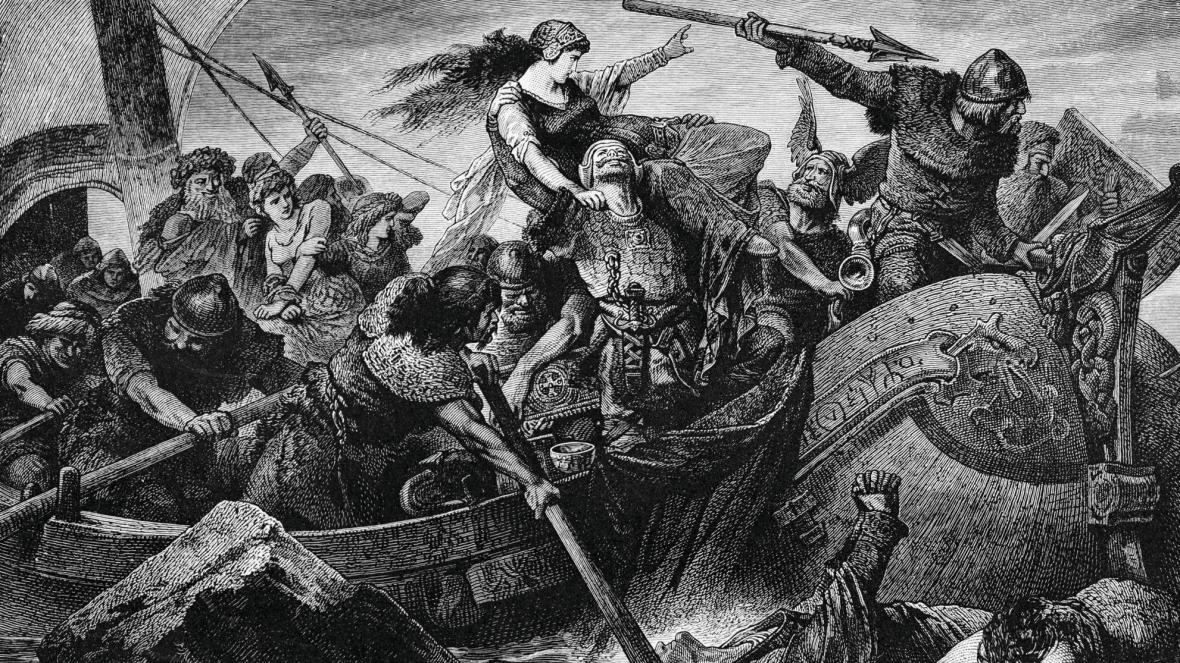 The Vikings were famous seafaring people from the late 8th to early 11th centuries who made a name for themselves as traders, explorers, and warriors.

While these people are often attributed to savages raiding the most civilized nations in search of treasure and women, the motives and culture of the Viking people are much more diverse. These raiders also facilitated many changes in all lands, from the economy to the war.

In 789 AD, three long warships set off from the coast of Northern Europe and carried the first Viking raiders to reach the coast of England. These early Vikings landed in Lindisfarne, where they fired the Christian monastery, stole books and treasures, and murdered local monks. From these cruel beginnings, the Vikings continued to be an inseparable part of British society. These are the best places to marvel at the Viking artifacts and discover their treasures, horrors, and influence on Britain.

House of Manannan (Isle of Man)

Manannan House uses reconstruction, characters, sights, and smells to show how Celtic and Viking cultures merged together on this small island in the Irish Sea.

You can traverse the life-size of the Celtic swing shed to understand the benefits and pressures of island life. Or, together with the members of the Crows of the famous Viking long-distance battleship Odin, reimagine the difficult mission in the rough North Sea. Visitors can also discover the stories behind the magnificent stone crosses scattered on the island and learn how they represent the fusion of Viking and Celtic culture.

Learn more about the cultural heritage of Manx. The Kingdom Man Gallery connects visitors to an inspired collection of Celtic and Viking handicrafts, revealing the maritime history of the island and the importance of the ocean to its people.

The Yorkshire Museum brings together a range of Viking and Anglo-Saxon artifacts to showcase Viking Britain’s wealth and power. It is home to one of the most important Viking expeditions, the Vale of York Viking.

The treasure was discovered in North Yorkshire in 2007 by metal detectives David and Andrew Whelan. The gilded silver cup contains 617 huge coins and 67 gold and silver handicrafts, including a rare gold ring. The value and scale of the discovery is reflected in the halls of the museum and other gifts, such as the Jilin sword and the bronze helmet, which highlight the wealth and status of Jorvik and the wider Danelaw.

The latest exhibition in 2017 brings together one of the most important series of Viking artifacts of all time. Vikings: Rediscovering the legend is a partnership with the British Museum, which means that the amazing collections of the Yorkshire Museum are exhibited alongside other important helots from all over the country to provide insights on how the Vikings shaped Britain Fresh insights.

Zovik Viking Center; animated Viking pirates will take you back in time, and the smell and sight of eighth-century Britain truly bring history to life. Park-like themed rides take you through Viking-era Europe, including hunters, merchants, blacksmiths, and fishermen.

Built-in a key part of the Viking city, Jorvik, visitors can delve 6 meters underground to discover the remains of the Viking fire and the walls that made up the historic city. With clever use of the touch screen and the displayed videos, you can recreate the discovery of Jorvik artifacts, just like the archaeologists of the 1970s.

The Jorvik Antiquities Gallery takes you back to the modern world, into a beautiful and interesting museum, and displays some interesting and inspiring artifacts. Approximately 250,000 pots and 40,000 personal items enable the York Archeological Trust to plan the perfect choice, both to teach and inspire people, and to provide an ideal residence for anyone interested in our Nordic ancestors.

The Dock Museum is a great all-rounder, their collection stretches from hand axes, made during the Neolithic period (3500BC – 2000BC), right up to board games made in the 1970s. In our opinion, however, their most important collection stems from the Furness Hoard, a huge collection of Viking and Anglo-Saxon coins and artifacts discovered in 2011.

The treasure is the largest Viking treasure in the history of the region, and it tells us about the massive trade and political activities that took place at that time. Composed of 92 silver coins and numerous ingots and armbands, this extremely important archaeological discovery made it an important stop for fans of the Viking Age. In addition to the Howard Museum, there are many other Viking artifacts in the museum, including swords, heavy hammers, and spindles, all of which illustrate the richness and complexity of Viking life.

The Ancient Technology Center in Dorset is home to a 26-meter, bow-sided Viking tall house built with traditional materials and techniques.

Visitors have the opportunity to spend day and night in the longhouse, giving up modern clothing in Viking robes, dresses, and belts. Your day will be spent completing farm and housework, including making fences, caring for animals, and mixing butter. At night, you can prepare a simple meal and enjoy Viking games, riddles and toys until you need to let go of the sheepskin cushions, close the leather windows, and cover to spend a very Viking night’s good sleep.

The learning center teaches visitors about the techniques and technologies used to build ancient homes.

The British Museum is an obvious good choice for those who wish to fully understand the life, and culture of the Vikings. They have a lot of Viking characters, but be sure to check which ones will be shown when you plan to visit.

The collection is home to the famous Lewis Chessmen who recount the Viking trade. Chessmen’s, testify to the strength of the relationship between the British Isles and the Nordic countries around the first millennium AD, and also offer a spotlight on medieval society, with the various groups represented in the figures.

In addition to these important Viking artifacts, the collection also includes the Sutton Hoo Helmet and Long Ship that complement the Viking collections and allow visitors to compare two separate cultures that lived and fought side by side.

The journey through the tidal causeway to reach the holy island of Lindisfarne is enough to awaken images of invading Viking ships and terrified and trapped monks. This was the site of the first recorded Viking raids on British soil and the beginning of the Viking invasion of Britain.

The little monastery first tells the story of the Anglo-Saxon monastery built 1400 years ago, the story before the Viking invasion, and the importance of the island. The on-site museum displays artifacts from early monastic life, such as the Lindisfarne gospel and depictions of Viking raids. Notable collections include tomb markings in letters and runes and a Viking boulder known as the ” Viking Domesday Stone”, which shows several weapon-wielding men.

This is a major stop for anyone on a Viking heritage site and the picturesque location makes for a memorable day out.