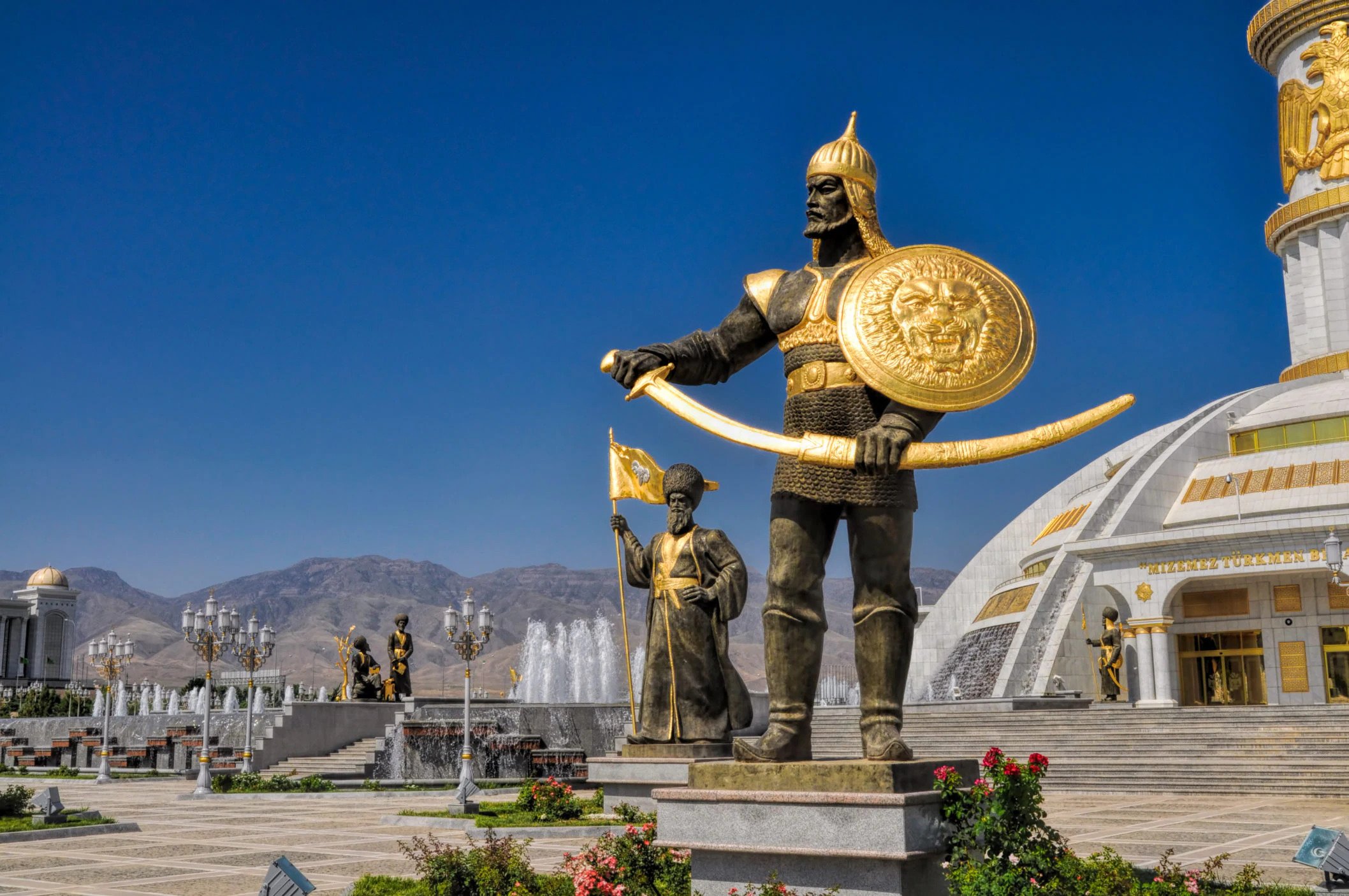 Turkmenistan is a nation with a big history and terrain in central Asia, surrounded by Kazakhstan, Uzbekistan, Afghanistan, and Iran, with the Caspian Sea to the west.

Modern Turkmenistan is located on the famous Silk Road. It gained its independence a short time ago, such as in 1991.

It is now a country of contrasts, with new cities such as Turkmenbashi’s port and the capital Ashgabat booming with industry and, gradually, tourism. Meanwhile, nomadic horsemen lead a more conventional way of life, traveling from settlement to settlement in their yurts, and the remains of ancient cities at Merv tell of much earlier history.

Similarly, the terrain, which is dominated by the vast wastelands of the Karakum desert, is punctuated by lush green national parks, including the well-known and incredible Door to Hell.

This isolated and isolationist country, which is mostly covered in sand and desert scrub, has served as the stage for world history in the past.

Kunya Urgench, once a significant Achaemenid Empire fortress, is an ancient city – and UNESCO World Heritage Site – in Turkmenistan’s northwest. The old town features a number of temples dating from the 11th to the 16th centuries, and the vastly abandoned surrounding countryside is infused with the ruins of archaic fortified villages.

There are lavishly adorned fortresses on the Amu Daria River’s bank that are inspired by Central Asian Islamic architecture. The formidable Gates of Caravanserais, a former Silk Road station, can be found here.

Travelers typically base themselves in Dashoguz, Uzbekistan’s new provincial capital and border crossing point, before venturing out to discover the region’s cultural heritage. Izmukshir, a city of ancient ruins dating back to the third century BCE, is about 15 miles southeast of Dashoguz. It is also known as Zamakhshar, the birthplace of Hanafite scholar Abu al-Qasim Mahmud b. Umar al-Zamakhshari.

In the 12th century, Merv was the largest city in Turkmenistan and a major Silk Road stop, this historic point now houses a series of ancient settlement sites less than an hour’s drive from Mary, the provincial capital through which many tourists enter Merv.

The forts of Big and Little Kyz-Kalas, where rectangular wall structures exemplify the corrugated Koshka and are reminiscent of the pre-Arabic period, constructed between 600 and 900 AD, are popular tourist attractions.

Merv is also home to the grandiose Mausoleum of Sultan Sanjar, which is the longest-standing testament to Seljuk’s power. These mausoleums, which are located in what was once Sultan Kala’s heart, feature beautiful Seljuk brickwork and architectural decor.

Another famous mausoleum in Merv is the mausoleum of Mohammed ibn-Zayd. The mausoleum of Muhammad ibn-Zayd, one of Turkmenistan’s most atmospheric shrine complexes, was rebuilt in the early twentieth century. A mosque runs through the north side of the complex, and inscriptions on the chamber walls date the original construction back to 1112 AD.

Ashgabat is one of the few places where visitors to Turkmenistan can find luxury. Ashgabat, also the capital of the country, can be interpreted as an urban oasis to showcase the country’s glorious achievements to the rest of the world.

The contemporary Oguzkent, a gleaming complex in the center of the city with primary access to both cultural and business locations, is one of the city’s most luxurious accommodations. Another five-star option with an exquisite interior is the Grand Turkmen, which is centrally situated between the Presidential Palace and the Square of Independence.

The beautiful Gypjak Mosque is open to tourists. The Gypjak Mosque, which has a monumental prayer hall with white columns and a celestial blue roof, can hold over 10,000 people, but visitors to Turkmenistan are few and far between.

The Parthian Fortresses of Nisa, another UNESCO World Heritage Site in the region, contains unexcavated ruins of an ancient civilization, indicating an early and significant city within the dominant Parthian Empire.

THE GATES OF HELL

A 230-foot-wide hole in the hot, expansive KARAKUM desert, near the village of Darvaza, has been on fire for more than 40 years.

In 1971, a Soviet drilling rig mistakenly punched into a vast underground natural gas chamber, causing the earth to crumble and the drilling rig to crash in.

To avoid a possible environmental disaster, the Soviets set the hole on fire and thought the burning would stop in a few weeks. But, on the contrary, the pit is still burning and still getting stronger.

Despite the crater’s foreboding name and ever-present fire, visitors continue to trek into the desert to see the site in all its blazing glory. The country’s government hopes it will become a tourism attraction, and the surrounding desert has also become a popular spot for wild camping.

Bronze Era villagers gathered along the Murgab River in what is known as the Margiana Oasis long before Merv built its first tower. The largest of these ancient settlements, which is currently being excavated around Gonur Depe, has astounded archaeologists with its massive size and intricate architecture.

Viktor Sarianidi, the Russian-Greek archaeologist, made the first discovery in 1972 and continues to work at the site, uncovering new discoveries. Sarianidi believes Gonur to be one of the ancient world’s great civilizations, and although this argument might be debatable, it is a fascinating site.

Gonur is a two-hour drive from Mary. A 4WD is required as the final 20km of road is little more than a rough track in the dirt.