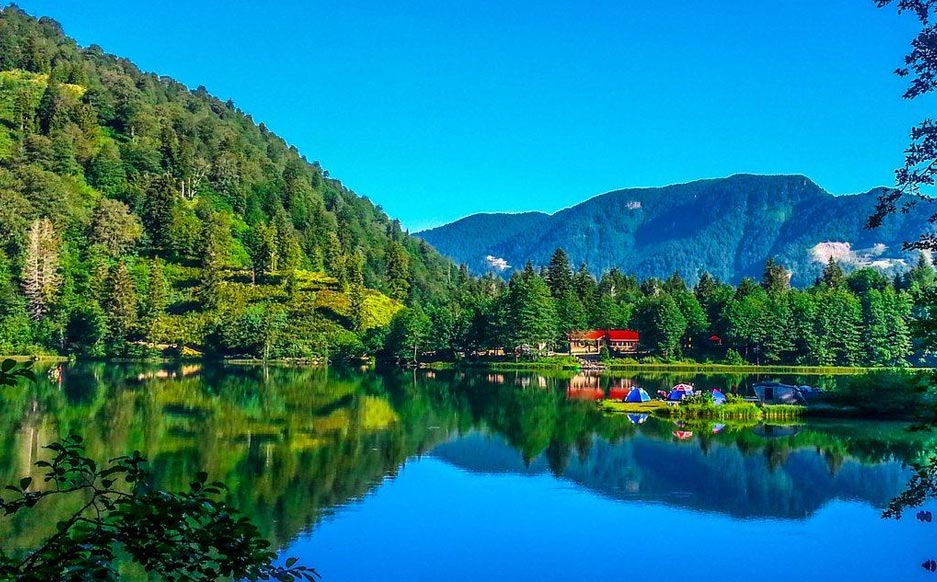 Artvin is a city in northeastern Turkey about 30 km inland from the Black Sea. It is located on a hill overlooking the Çoruh River,  on the border with Georgia.

Artvin, with its rich flora and fauna, glacial lakes, valleys, and caves, has significant alternatives in nature tourism, which can be realized in the Eastern Black Sea Region.  Moreover, it is pretty remarkable with its historical churches belonging to Georgians.

During the Bronze Age, Georgians settled in the valleys of the Coruh River and its tributaries. 12th century BC Assyrian records confirm that Georgian tribes occupied these lands and centuries later, they were still living autonomously in the area. Retreating from the Persian campaigns in 401-399 BC, Xenophon describes hostile encounters with Colchians, Taochi (Daiaeni) and other Georgian tribes.

It was not until the 9th century that Ashot I, a Bagrati prince and ruler of the southern provinces of Georgia, began to build a powerful state. His territory included Tao and Klarjeti (now located in Turkey) and many Georgian churches, monasteries, fortresses and castles were built in the region between the 10th and the 12th centuries.

It is located in Tekkale village, 4 km southwest of Yusufeli town, on the hamlet road 7 km after the village. Otkhta is one of the large cathedrals in Tao-Klarjeti, with Oshki, Ishkhani, and Khakhuli, and one version that is why it is called Otkhta, which means in English “from fourth”.

It is understood that the monastery was built by the Georgian King David in the 9th century, and when we look at the building complex, it is a Nuns School. Monastery; It consists of a bell tower, a dining hall, a seminar room and a chapel. The church is similar to the Barhal Church in terms of plan. The medieval period in the region reflects the monastery formation in the best way.

Tibeti Church (Tibeti Kilisesi) or The Cathedral of Tbeti (Tbeti Katedrali) is located at about 15km from Savsat town, in the province of Artvin.

Tibeti Monastery was a medieval Georgian monastery in Historical Southern Georgia called as Tao-Klarjeti. At the time of the foundation of the cathedral, Ashot Kukhi was Bagratid prince. For this reason, he is credited with having founded Tbeti Cathedral sometime between 891 and 918. It is assumed that Tbeti Cathedral was dedicated to St. George.

The village where the church is located(at 1200m above sea level) is surrounded by dense forests and is filled with numerous lakes. It is possible that the area got its name Tbeti from the presence of lakes. The Georgian word for lake district, tba-eti, offers evidence supporting this conclusion.

The former cathedral buildings have, unfortunately, been damaged severely. Its walls are now nothing more than a ruin of what was once a magnificent cathedral building that served as the central site for life in an intellectually and culturally productive monastic community.

Khandzta was a medieval Georgian monastery founded by Gregory of Khandzta in 782 AD. It has been identified as probably being the ruined monastery known as Porta, in Pırnallı village.

Monastery; It consists of a church, chapel, fountain, and bell tower. It is possible to see the houses of the hamlet around it. It was abandoned at the end of the 16th century. The monastery and the houses surrounding the monastery are good examples of the medieval settlement order.

Ahaldaba (Yeni Rabat) Church is a medieval Georgian church in the village of Longothevi( today Bulanik), 17 kilometers away from the Ardanuc District. The Ahaldaba Church, which is the main church of Ahaldaba Monastery, also known as Longothevi Monastery, was built in the 10th-11th centuries during the reign of the Georgian Kingdom.

The church is estimated to have been renovated in the 12th century during the reign of Queen Tamar by Queen Tamar’s chief vizier, Anton Glonistavisdze.

Ahaldaba Church has a free-cross plan. The church has two entrances. Triangular niches that reflect the inner plan outward, characteristic of medieval architecture in the region, were used. It is known that triangular niches were rarely used in the drum of the dome in Tao-Klarceti architecture. Tao-Klarjeti is a Georgian historical and cultural region in north-eastern Turkey and south-western Georgia.

The region is based around two river basins – Chorokhi and Kura, but also includes the upper source of the Aras river. The church has more windows than the number of openings: there are stones decorated with relief plant motifs on both sides of the church. There is an inscription in Georgian and Armenian on two separate stones.

It is located in Hamamlı Village of the Merkez District. From the Berta bridge location of the Artvin-Şavşat highway, it is reached to the northwest by a 6-kilometer road. According to its inscription, it was built by X. Bagratlı King Sumbath. XVI. Only the church has survived from the monastery, which was used as a mosque in the 19th century.

According to the inscriptions found in the church, the monastery was built by the architect Gabriel by Sumbath, who was a king in Tao-Klardjethie of the Iberian Kingdom between 954-958. XIV. The building, which continued its activities as a monastery until the XVI century. It was converted into a mosque in the 19th century.

It is the church of Barhal Monastery which is considered to have been constructed by David Magistros, Georgian King between 961-973. It was specified in the manuscripts that the church was committed to John the Baptist. A church and two chapels have reached today.  The construction has been used as a mosque since the mid of 17th century. It is one of the visiting destinations by Georgian tourists.

Barhal Monastery Church has three-naved basilica plan in 28.40×18.65 m. Three gates ensure entrance to the church in the midst of the north, south and west walls. The middle nave is wider and higher than the side naves and the naive separation is ensured by four pairs grades with cross plan and the semicircle arches which connect them. A semicircle planned absis and two-storey rooms take place just near the the apsis. There are 36 windows in 2 different levels indoor. At the west side of the mid nave, there is an original gallery floor.

The gallery floor is carried by rectangular two free two wall grades and a semicircle arches connecting them. The church established on a three-legged platform was constructed in infill wall method by using proper face stone. Wall method consisting of filler in-between double walled  face stone on the wall.  Body wall weight is 105 cm. Upper cover of the construction is in saddle roof on the vault. Original top called as Semerdam was constructed as cover method.

The construction was cleaned and additional parts were removed within the scope of the restoration works. Surfaces of the stone tiles and facade covers on the main roof were cleaned. Tile marks which became visible after the removal of the cement surfaces on the nave roofs were documented and covered with stone roof tiles in the original form and measurements.

Ishkani Church is located in the high and mountainous Işhan village, overlooking the beautiful valley of Çoruh (Chorokhi) River. The village was part of the historic Tao region in the medieval Georgian Kingdom.

The Georgian inscription on the entrance to the chapel indicates that King Gurgen I (died 1008) dedicated it to the Holy Mother of God.

The site’s main building is the large cross-domed church which measures 36.60 meters in length, width of 19 meters at the crossing; western arm 15 meters long and 9 meters wide; the height of about 35 meters, dome height of 11.4 meters, the diameter of 7.86 meters) . The facade of the building is composed of smoothly cut stones. The tall, cone-shaped roof is covered in dark red and green tiles. After the restoration, four arms were covered with stone slabs that are now also covered in the same style of tile.