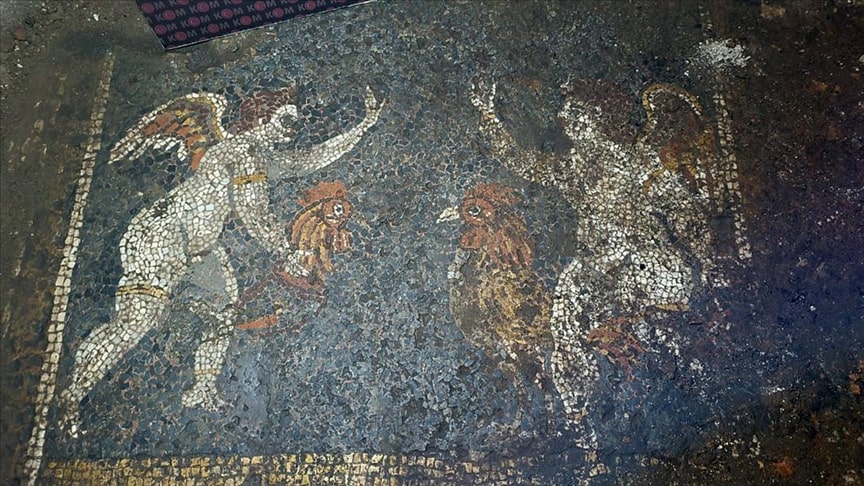 Two 2700-year-old mosaics, which are thought to belong to a Roman rich man and symbolize magnificence, were found in a house-shaped compartment 10 meters below the ground in the Konak district of Izmir.

İzmir Police Department Anti-Smuggling Branch Cultural and Natural Assets Smuggling Bureau teams have learned that illegal excavations were carried out in the garden of a residence close to the historical Kemeraltı Bazaar and Agora Ruins, between narrow streets where vehicles cannot enter.

After a month-long follow-up, the teams, which carried out an operation at the determined address, caught 3 people who were trying to take out the historical remains about 10 meters below the ground by digging a tunnel.

As a result of the examinations, two mosaics of 178×171 centimeters and 2 plinth fluted columns with a length of 2 meters, belonging to the early Roman period covering the years 753-509 BC, were found in the area descended from a well by a ladder.

It was stated that the mosaics with two human figures with a rooster in their hands are usually found in the halls of the houses, symbolizing magnificence and wealth.

The area where the mosaics, which are said to be uncommon in the world, are found, has been taken under protection.

The suspects, landlord A.E, tenant M.C., and H.S. He was taken to the police station for deposition.

It was learned that the suspects, in their statements, said that they dug the garden of the house to extract water, and as a result, they found mosaics and columns. The suspects’ proceedings are continuing.

After the police gave information, experts from the Izmir Archaeological Museum conducted research in the region.