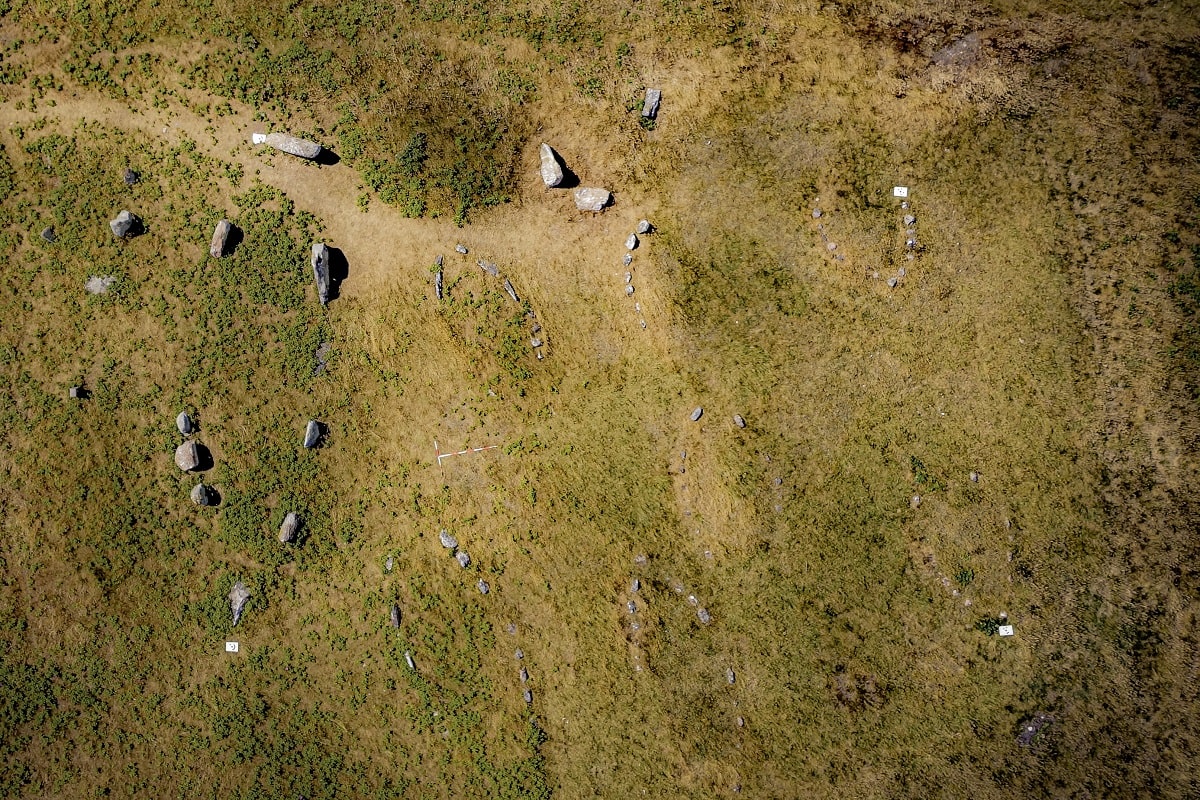 Archaeologists studying the origins and makeup of the Kalvestene burial field, a famed place in Scandinavian legend, have undertaken new extensive assessments of Viking period ship settings at Hjarn, Denmark.

A team of researchers from Flinders University and Wessex Archaeology studied Kalvestene, a Viking burial site on the Danish island of Hjarn, and matched their results to a map drawn by the antiquarian Ole Worm in the seventeenth century, according to a statement provided by Flinders University.

The burial site is made up of monuments that, according to legend, commemorate a king named Hiarni who was crowned after writing a beautiful poem on the death of the old king and who was defeated in battle on the island.

The research, published today in The Journal of Island and Coastal Archaeology (UICA), shows the design of the famous Kalvestene grave field is unusual when compared to other Danish sites of the same period which typically incorporate circle, oval or triangle stone settings in addition to the ship-shaped settings. Instead, there are strong parallels with Southern Swedish sites, raising questions about links between the two regions.

Ole Worm’s 1650 drawings showed more than 20 ship settings at the location, and while data collected by the researchers suggests that there were probably never as many ship settings as that, it is possible that they have identified two new ship settings.

“Our survey identified two new raised areas that could in fact be ship settings that align with Worm’s drawings from 1650. One appears to be a typical ship setting and the second remains ambiguous but it’s impossible to know without excavation and further survey,” says lead author Dr. Erin Sebo at Flinders University.

The paper, The Kalvestene: a re-evaluation of the ship settings on the Danish Island of Hjarnø, was co-authored by archaeologists from Flinders University in Australia including Dr. Erin Sebo, Chelsea Wiseman, Dr. John McCarthy, Dr. Katarina Jerbić, and Associate Professor Jonathan Benjamin with geophysicist Paul Baggaley from Wessex Archaeology.

“It seems surprising that such a small grave field would be famous and yet the existence of the site was well known in medieval Scandinavia. The island was famous probably because ships would have to sail past to reach a trading centre at Horsens and artefacts from a hoard excavated by Dr. Mads Ravn and his team from the Vejle Museum in 2017 suggest the island was visited by foreign traders.”

The ship settings are today interpreted as a religious symbol of the Viking’s connection to Norse mythology and the god Njord. His symbol, a ship or Skidbladnir controlled wind and weather so the Vikings paid tribute to him for good sailing conditions.

The researchers analyzed medieval records, aerial photogrammetric, and LiDAR data collected by the Moesgaard Museum to reveal why Hjarnø is unique in terms of its construction after being adapted to the specific conditions of the small island community.

“An archaeological survey was undertaken in 2018 to record the features of the ship settings and their position in the coastal landscape at Hjarnø,” says Associate Professor Jonathan Benjamin who is the Maritime Archaeology Program Coordinator at Flinders University’s College of Humanities, Arts and Social Sciences.

“Each stone was measured and drawn alongside data we acquired through low altitude photography to provide the landscape, in conjunction with sonar surveying in waters near the Viking site, to check for culturally significant material but no indications of this were located during the survey.”

“While this study is unable to offer a conclusive understanding of the origins of the Kalvestene, it demonstrates the value of combining source criticism and analysis with archaeological data to contribute towards greater understanding about the site.”