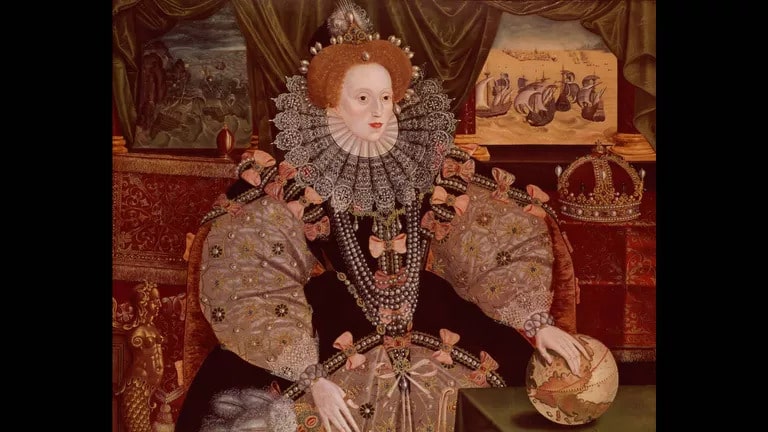 A rare presentation manuscript that Archbishop of Canterbury Matthew Parker gave to Queen Elizabeth I in 1573 has been sold at auction and is in danger of leaving the country unless a buyer is found to keep it there.

The UK’s Art Minister has imposed a temporary export ban on the rare artifact in the hope that a museum or institution will raise the purchase price in order to keep it in the country.

The manuscript, made of nine circular roundels, was part of a gift from Archbishop Matthew Parker to the Queen in the early 1550s. The roundels were likely folded and integrated into a now-lost gold salt cellar. The use of shell gold around the miniatures is believed to indicate that the manuscript was given with the intention of impressing Elizabeth.

The Department for Digital, Culture, Media, and Sport (DCMS) has said the manuscript has a recommended price of £9,450 (plus VAT of £390 which can be reclaimed by an eligible institution).

The manuscript is unusually shaped with three rows of nine roundels connected by thin vellum strips. The motto of the Knights of the Garter (“Honi soit qui mal y pense”) surrounds an oval blue and gold illumination of St. George and the Dragon in the center of the roundel.  A Latin inscription around the edge of the roundel refers to Archbishop Matthew Parker’s gift of agate to Queen Elizabeth I.

A blue profile of Queen Elizabeth is depicted in miniature in the bottom row’s center roundel. The portrait is surrounded by three concentric rings of three Latin proverbs. Only inscriptions are found on the remaining roundels. In French, the top row inscriptions define agate. The rest are Latin texts about agate and its properties. Different calligraphic scripts are used to write the various languages, an elegant touch also seen in other manuscripts given to Elizabeth.

The presentation manuscript accompanied a gift, described by Matthew Parker as “a salt cellar made of gold, into the cover of which was inset a jewel, an agate, containing St George killing the dragon, along with verses in French upon the customary royal insignia; in the curved section or hollow of this was enclosed another agate, incised into which was a true likeness of the Queen on white agate. On the top of its cover, a small golden boat held a rectangular diamond.”

Experts believe the “verses in French” he mentions are the actual manuscript, and that all nine roundels were folded up to form a single 1.5-inch-diameter paper circle. That disc was then inserted into the precious salt cellar’s cover.

The manuscript is an extremely rare surviving artifact directly related to the Tudor monarchs’ practice of packing up the court and traveling across the country with a massive baggage train, crashing at the luxury pads of various nobles and clergy entirely on their dime.

The presentation manuscript fell out of view, after the queen’s passing but reappeared in John Sharp, the Archbishop of York, collection a century later. It stayed in that family for 300 years up until December 7, 2021, when it was sold at auction.

The decision on the manuscript’s export license application will be postponed until December 1, 2022. The second deferral period will begin three months after the option agreement is signed and will last three months. Where appropriate, the minister may also consider offers from public bodies for less than the recommended price via private treaty sale arrangements. Such purchases frequently provide a significant financial benefit to the public institution that wishes to acquire the item.

Arts Minister Lord Parkinson said: “Archbishop Parker is a figure of great historical and theological consequence, and this beautiful manuscript is a significant example of Elizabethan gift exchange.

“I hope a buyer comes forward for this piece so it can be used to learn more about both the Archbishop and Queen Elizabeth I.”

Cover Photo: Portrait commemorating the defeat of the Spanish Armada, depicted in the background. Elizabeth’s hand rests on the globe, symbolising her international power. One of three known versions of the “Armada Portrait”. George Gower