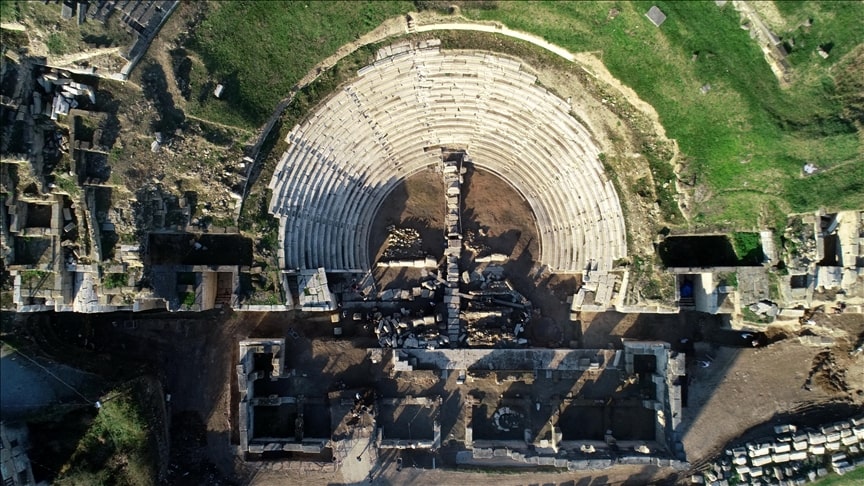 During continuing excavations in the northwestern province of Düzce, archaeologists discovered the orchestra floor of the theater area in the ancient city of Prusias ad Hypium, dubbed the “Ephesus of the western Black Sea region.”

With the support of the Konuralp Museum Directorate and Düzce Municipality, excavations continue in the ancient city, which is known as the oldest settlement in the region.

Even though new structures were erected on the archaeological site, which goes back to the third century B.C., the subterranean structure was intact. This has permitted the excavation of various buildings on the site, including an ancient theater, city walls, aqueducts, and a Roman bridge.

Medusa and mask sculptures, grotesque creatures thought to be 2,000 years old, and a vault in the stage was discovered during the excavations in the theater part. The archaeologists continued their painstaking work in the theater area, reaching the orchestra floor of the theatrical department. According to their examination, the intact floor was made of mortar.

Examining the stone statues and columns that were lying on their sides and broken during the works, the experts evaluate that the works were destroyed as a result of the severe disaster as the city was in the first-degree earthquake zone.

Speaking to Anadolu Agency (AA), Güldemet Yıldız Dursun, an archaeologist from Düzce Municipality Directorate of Culture, said that the theater, where archaeological work still continues, is one of the biggest structures that managed to survive for 2,000 years.

Noting that they have documented the findings in the theater section, Dursun said the orchestra floor will be restored in line with the methods preferred by experts.

The ancient city of Prusias ad Hypium was known as “Hypios” and “Kieros” in earlier periods. It was captured by Prusias I of Bithynia, and the people of Bithynia named the city in honor of their king.

However, Bithynia went bankrupt due to the opulent lifestyle of its citizens. The people of Bithynia bequeathed the kingdom to the Romans, which started the Latin influence on the city. The city was already rich in terms of architecture but flourished more under the Romans. It became known as Prusias ad Hypium.