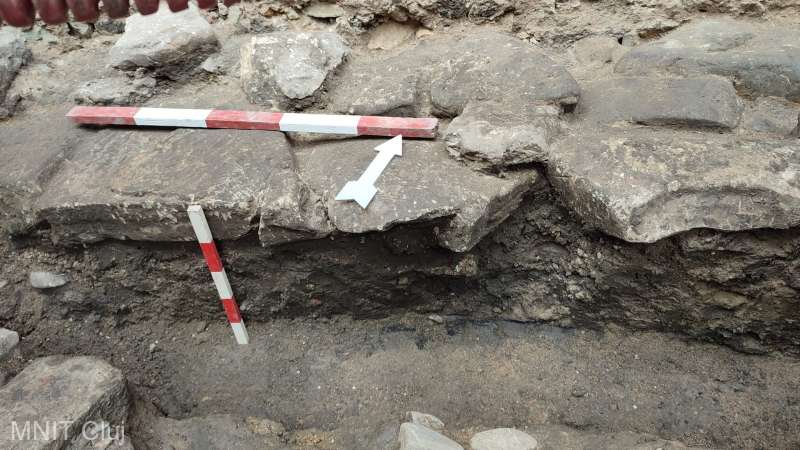 Archaeologists from the National Museum of the History of Transylvania have discovered a well-preserved 2,000-year-old Roman road in the city of Cluj-Napoca in northwest Romania.

On the site of the city was a pre-Roman settlement named Napoca. After the AD 106 Roman conquest of the area, the place was known as Municipium Aelium Hadrianum Napoca.

“Several fragments of a Roman road were found, covered with slabs and built of river stones, sometimes glued with mortar, at a depth of about 80 cm. The orientation of the road is north-south, and it is probably related to the street network of the Roman settlement of Napoca,” archaeologist Cristian Dima from the National History Museum of Transylvania told Agerpres.

According to Cristian Dima, the roads made by the Romans were used for a long time after the fall of the Roman Empire, and some are still used today, at least as their route. In fact, many of today’s roads preserve at least the course of the roads from 2,000 years ago.

“Roman roads, like in everything that was the Roman Empire, were reused after the fall of the empire. There are many examples in Italy, Via Apia, etc. They are reused. In our country, the Middle Ages begin somewhere in the 14th century, in Cluj, with the foundation of the citadel. Of course, the Austrians reused them in their period, after that the street layout and today’s layout is still preserved, more or less, as it was in the Roman period. Several roads are identified, both in the Roman civil settlements and in the military settlements, in particular. In Alba, many roads are discovered, right in the area of ​​the XIII Gemina castle, in Turda, a few more roads are discovered. The imperial road that we, those from the Cluj Museum, discovered during the excavations in 2021, on the highway route, the road discovered in the area of ​​the Roman fort at Sutor, etc.“, the archaeologist from Cluj also said.

“Part of the Roman road networks/routes are still preserved today,” Cristian Dima said, adding that this is especially true in rural areas. “In larger cities, where there are more interventions, these are not kept exactly. Between localities, mostly the same routes are used. In Transylvania, where the Habsburg and Austro-Hungarian Empires were, they did a lot of construction works, many of them were modified.”

He emphasized that the strength and durability of roads and other structures built by the Romans derive from their later reuse and maintenance, as well as the Roman technology that was developed for the time.

“They had quite advanced technology for the time. […] A fairly solid structure was made, with large stones at the base, then with small stones and then large slabs at the top, more or less processed. Feleac tiles, some of them rounded, were used in Cluj. On a smaller scale, it closely resembles what is preserved today in Pompeii,” Cristian Dima explained.

The Roman roads were notable for their straightness, solid foundations, cambered surfaces that aided drainage, and the use of concrete made of pozzolana (volcanic ash) and lime. Roman roads were very quick and safe to travel large distances.