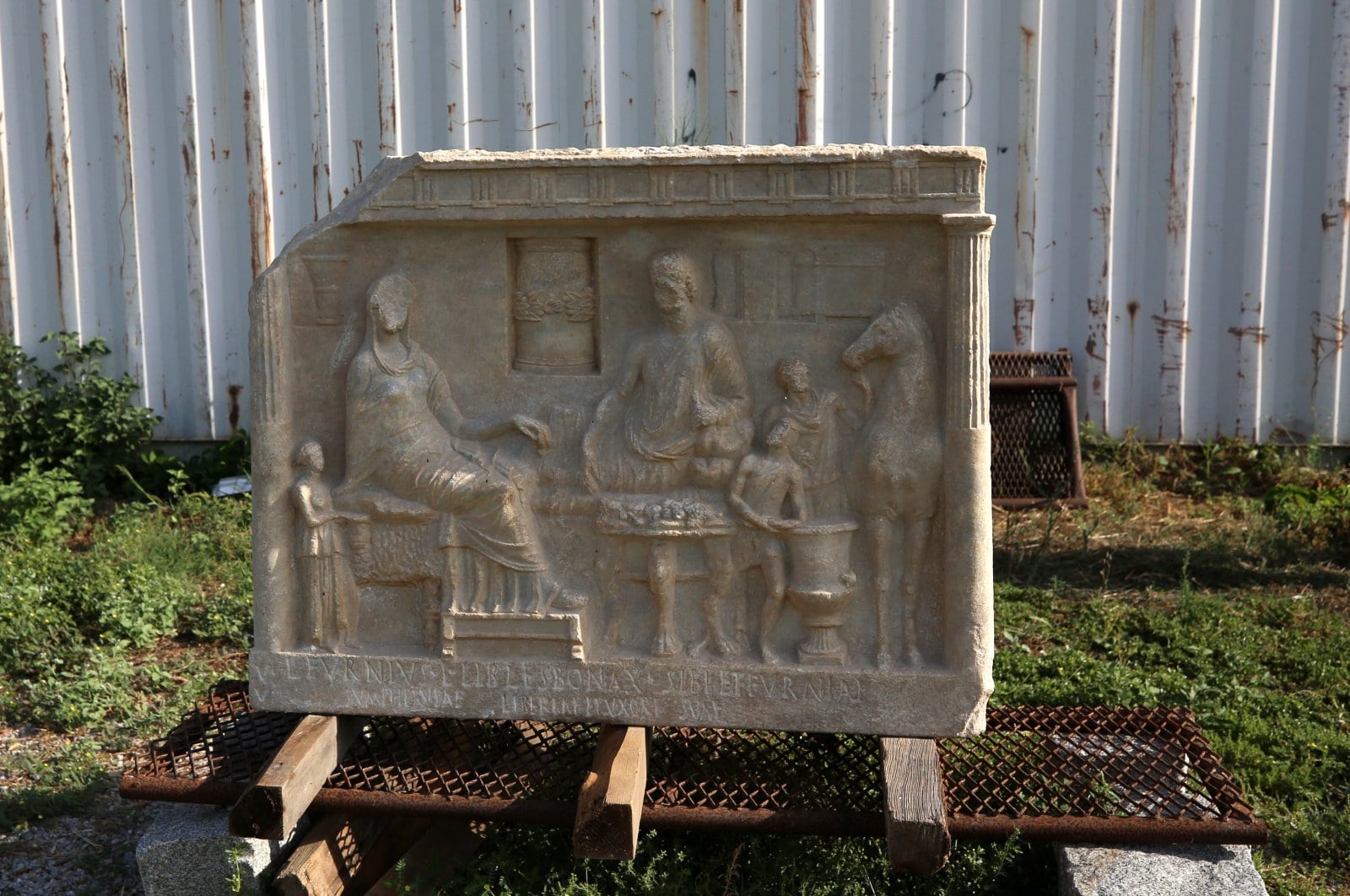 A 1,900-year-old grave stele was found during excavations in Parion, an important ancient port city, near Kemer village in the Biga District of Çanakkale province in western Turkey.

The grave stele is known as the name of funerary or commemorative slabs in the ancient world.

Work continues in the ancient city of Parion, which sheds light on the region’s 2,700-year history, with 12-month excavations supported by the Ministry of Culture and Tourism.

Professor Vedat Keleş from the Department of Archaeology of Ondokuz Mayıs University and the head of excavation at Parion said that they discovered an extremely important tomb named “Mausoleum Tomb-6” while working in the southern cemetery of Parion.

Keleş’s crew discovered a burial chamber while cleaning this region, which had been damaged during the construction of Kemer Village Primary School in 2004. They have uncovered a burial stele with fluted columns as part of their ongoing excavation.

The stele, which is one meter (3.28 feet) by one meter in size, is one of the best tomb steles discovered in the region recently, according to Keleş.

In his statement to Professor Vedat Keleş Anadolu Agency (AA), “There are two main figures on the stele. While the first one is a seated woman on the left side, the other one is a male figure lying right next to her” said.

The excavation head explained that there is a Latin inscription on the lower part of the tombstone. According to the analysis of the first inscription, the inscription includes a description meaning “Lucius Furnius Lesbonax, who was freed by Lucius, had this burial stele built for himself and his wife, Furnia Sympnerusa.” According to initial assessments, the tombstone is thought to be 1,900 years old.

Keleş stated that they noticed that the grave was covered with five stones while working at the site. “We determined that there were four burial phases here and that a total of 10 individuals were buried in these phases. According to the information given by anthropologists, one of them was a child and the other nine were adults. In the graves, separate burial gifts were found for each individual.”

Stressing what an important find the stele is, Keleş said: “It showed us that Parion was used extensively in the southern necropolis in the Roman period and in the previous periods. Besides, we can see that it was a rich city in the Roman period when we look at the condition of the tomb stele. The names on the stele are very important. For example, Lesbonax and his wife’s names are not Latin. These are Greek names. We can even say that the name Lesbonax was someone from the island of Lesbos. We understood that these people were enslaved when the Romans came to the city and then granted citizenship.”

The Parion Ancient City, which was founded as a port city, is renowned as one of the largest ancient cities in the region, having a diameter of roughly 4 kilometers. Some of the rows of seats belonging to the Roman Hammams and the theater have been uncovered as a consequence of the excavations in the old city, and investigations are presently underway.