The small 5 cm figurine found during excavations at Wimpole in Cambridgeshire surprised with its details.

National Trust archaeologists and colleagues from Oxford Archeology East surveyed part of the ancient landscape of the National Trust’s Wimpole Mansion as part of the new visitor welcome and parking project in 2018, and revealed a late Iron Age in the early Roman rural settlement.

However, the details of the artifacts found led to different discoveries. 1 century. The details on the dated statue gave us the opportunity to learn about the trends of that period.

In the statue, a small mustache is now clearly visible, and the figure’s hair, which could represent 1st-century trends or how the god is normally depicted, was neatly shaped at the front and long but regularly visible at the back.

Shannon Hogan, National Trust Archaeologist for the East of England, said:
“This figure is an exceptional find and thanks to careful conservation and cleaning, we can now see some remarkable detail. His hairstyle and moustache are clear, which might be indicative of current trends or perhaps ‘typical’ for depictions of this particular deity.

“The artefact dates to the 1st century AD, and whilst possibly of Roman manufacture, exhibits very Celtic traits such as his oval eyes. The torc it is holding – an open-ended metal neck ring – is still clear and a small recess at the centre is suggestive of a decorative inlay, now lost.

“We have extremely limited knowledge of what ordinary people of England at that time looked like, so this beautifully detailed figure might just be giving us a tantalising glimpse into their appearance, or how they imagined their gods.” 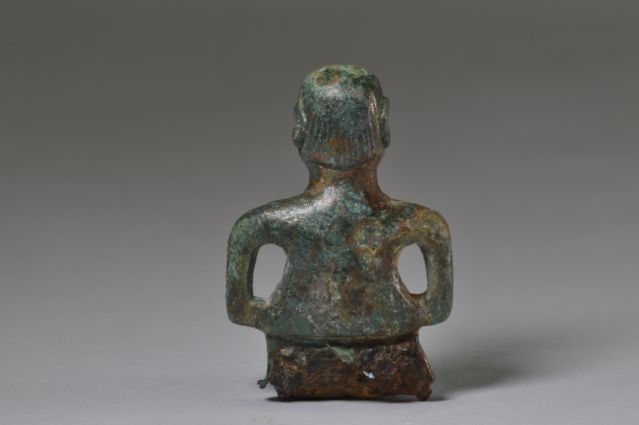 The figure probably originally served as the handle of a spatula. It may have been lost or deposited at Wimpole by inhabitants of early Roman Britain at the end of the Iron Age. It is a reminder of the ways in which the Celtic religion shared features with the Roman religion during the Roman occupation of Britain from AD43 to 410, when both had multiple deities responsible for different aspects of daily life.

Chris Thatcher from Oxford Archaeology East added: “Finds such as this give a rare and fascinating insight into aesthetics and symbolism in the latest Iron Age. The extent to which his hairstyle is typical of contemporary styles will never be known for certain. However, we think the combination of him holding a torc – associated with status – and forming the handle of a spatula – either used to mix medicines, or wax for writing tablets – speak of influence and power. The fact that he was found on a site with so much other evidence for it being a local hub is wonderful and appropriate.”

The excavation team at Wimpole found a site that surpassed their expectations. The settlement is believed to have been at the centre of a strong trading network, with imported pottery as well as around 300 metal objects uncovered during the dig. They included coins, cosmetic implements, horse harness fittings, Roman military uniform fittings, a spearhead, an axe head, key handles, brooches, as well as scrap lead and a number of iron nails.