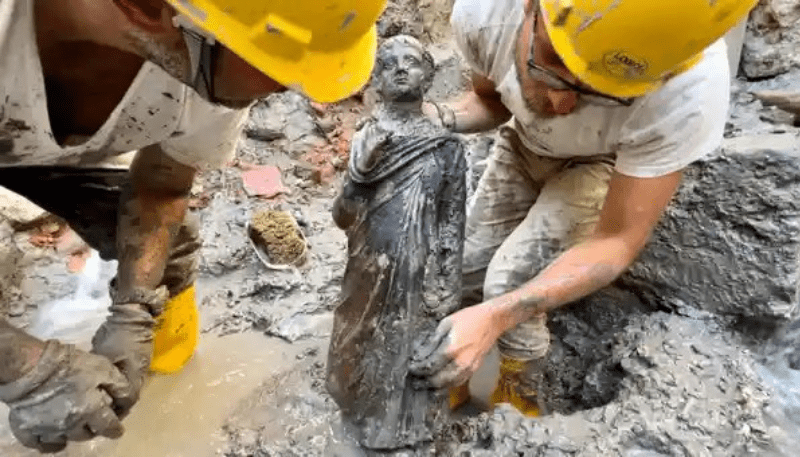 A group of Italian archaeologists made the discovery of 24 well-preserved bronze statues from an ancient thermal spring in Tuscany.

This discovery is said to “rewrite history” regarding the transition from the Etruscan civilization to the Roman Empire in the first and second centuries B.C.

According to Massimo Osanna, Italy’s director of museums, the discovery in the sacred baths of the San Casciano dei Bagni archaeological dig near Siena is one of the most significant ever in the Mediterranean and certainly the most significant since the 1972 underwater discovery of the famed Riace bronze warriors.

The discovery is made up of 24 large statues, a few statuettes, and approximately 5,000 bronze, silver, and gold coins. All of the items date from the second century B.C.E. to the first century C.E., a time of conflict and cultural transformation as the region passed from Etruscan to Roman control.

However, the bronze statues show evidence that Etruscan and Roman families prayed together to deities in the sacred sanctuary of the thermal baths, with the statues bearing both Etruscan and Latin inscriptions.

The remarkable condition of the artifacts preserved by the mud is what makes the discovery so spectacular. It’s also worth noting that the area was previously known only for its terracotta statues.

The bronzes, which include portrayals of Greco-Roman gods like Hygieia and Apollo, were likely decorations for an ancient bathhouse and may have been thrown into the thermal waters as part of a ritual.

“You give to water because you hope that the water gives something back to you,” Jacopo Tabolli. Tabouli is an assistant professor at the University for Foreigners in Sienna and one of the coordinators of the dig explained.

Archeologists believe the works, some of which stand nearly a meter tall, were created by local artisans. Votive statues of pagan gods and depictions of young men, elderly matrons, and emperors are etched in exquisite detail on the sculptures, as is a sleeping ephebe (a young male usually between the ages of 17 and 18) lying next to Hygeia, the goddess of health, with a serpent entwined around her arm.

Also found were sculptures of organs and other anatomical parts that presumably represent some of the ailments for which visitors to the baths sought treatment.

The works are currently being restored and will be on display in a new museum in San Casciano. In addition, a new archaeological park is set to open in the town.