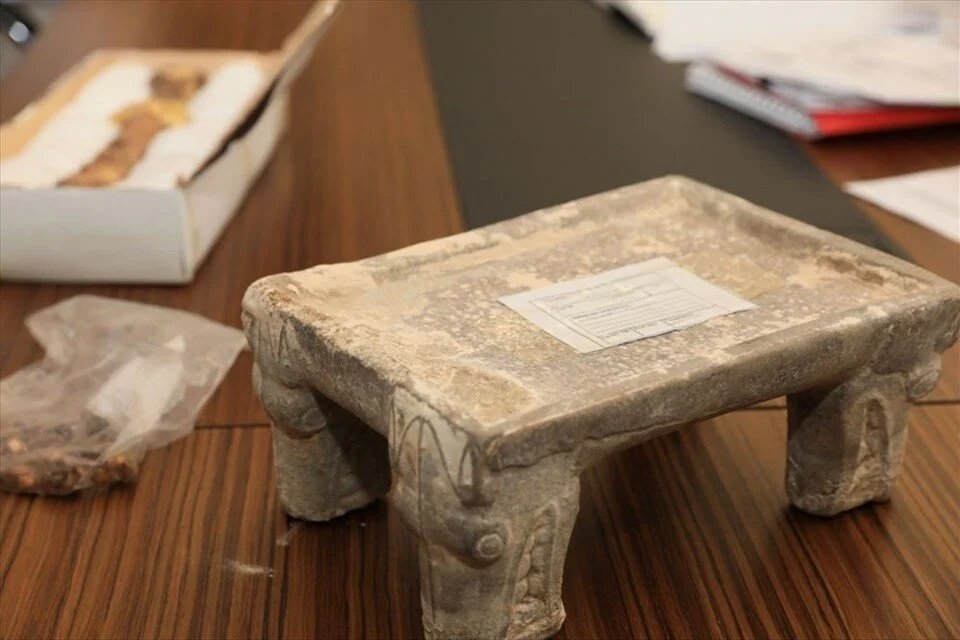 A stone altar and a gold-plated ceremonial sword used in the early Iron Age were discovered during excavations along the Zhagabulak River at the foot of the Mugalzhar Mountains by Specialists of the A. Margulan Institute of Archeology.

Archeological digs at an Iron Age cemetery in the Mugalzhar area of the province began a month ago, according to the Aktobe Governor’s Office. Bronze mirrors, gold buckles, and hooks were unearthed during excavations at a settlement close to the Iron Age cemetery.

The gold-plated dagger is thought to belong to someone of high status from the ancient Sarmatian tribe.  The Zhagabulak settlements are not far from the settlement near the village of Taşkopa in Temir county, where one of the leaders of the Sarmat tribe was buried last year.

The Sarmatians, a nomadic tribe of Iranian origin who lived throughout the Iron Age, are likely to have utilized the altar and sword, according to archaeologists, and the find will provide light on the 6th and 5th centuries B.C. After examination, the artifacts will undergo restoration.

The researches are part of the project carried out within the framework of the “Sacred Lands of Kazakhstan” project in the Aktobe region.

In ancient times, the area around the now completely flooded ancient Mugalzhar Mountain was green, wet, and rich in gold ore. The valley of the ancient rivers Temir and Zhem, located at the foot of the Mugalzhar Mountains, was the route of ancient people. There are finds dating back to the Stone Age in this region.

Researchers have been examining Bronze Age settlements in the Kargalı district since last year. They found settlements of ancient people in the Toleubulak cave in the Mugalzhar district. Rock carvings with petroglyphs of the Stone Age are marked in the cave, which runs along the Toleubulak river. Studies are underway to bring the symbols of the Stone Age depicting various flora and fauna into scientific circulation.