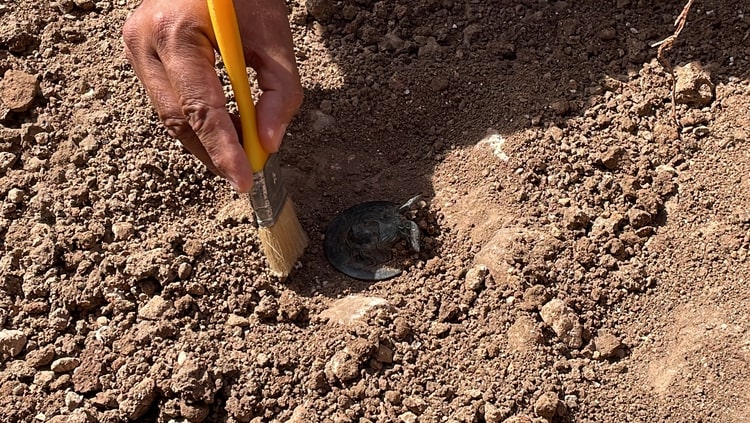 A military medal believed to be almost 1,800 years old has been found by archaeologists in Turkey.

The discovery was made during excavations in the ancient city of Perre, located in the province of Adıyaman in the southeast of the country.

Archaeologists discovered a bronze military medal with the head of Medusa on it. Medusa, also known as Gorgo in Greek mythology, was one of the three monstrous Gorgons, who were generally described as winged human females with living venomous snakes in place of hair. Those who gazed into her eyes would turn to stone.

It is said that if someone were to look Medusa in the eye for even just a moment, they would be petrified, literally, and turned to stone. It’s one of the most well-known aspects of Medusa’s character and is part of the reason she’s considered a protector with the ability to ward off evil spirits.

Medusa or Gorgons are frequently depicted on the front of the armor of Roman Emperors or generals, as well as on mosaic floors from Britain to Egypt and on the walls of Pompeii. There is also a depiction of Medusa on the armor of Alexander the Great (on the Issus mosaic)

There is even a myth about how Minerva (Athena) put a gorgon on her shield to make herself an even more fearsome warrior. No doubt, what is good for a goddess is good for the common people.

Since Athena put Medusa’s severed head into her shield and breastplate, Medusa’s face also became a popular design in such defensive weaponry. In Greek mythology, Athena, Zeus, and other gods and goddesses have been depicted with a shield displaying Medusa’s head.

Mehmet Alkan, director of the Adiyaman Museum, told reporters that excavations continue in the area with mosaics and in the section called the “infinity ladder.”

“The medal with a Medusa head appears as an award given to a soldier for his success,” he explained.

“It is a medal that a soldier wears on or on his shield during a military ceremony. We found a 1,800-year-old military diploma here during the excavations last year, and we also associate the medal with military service.”

​​​​​​​Perre is one of the five big cities of the ancient Greco-Iranian kingdom of Commagene.