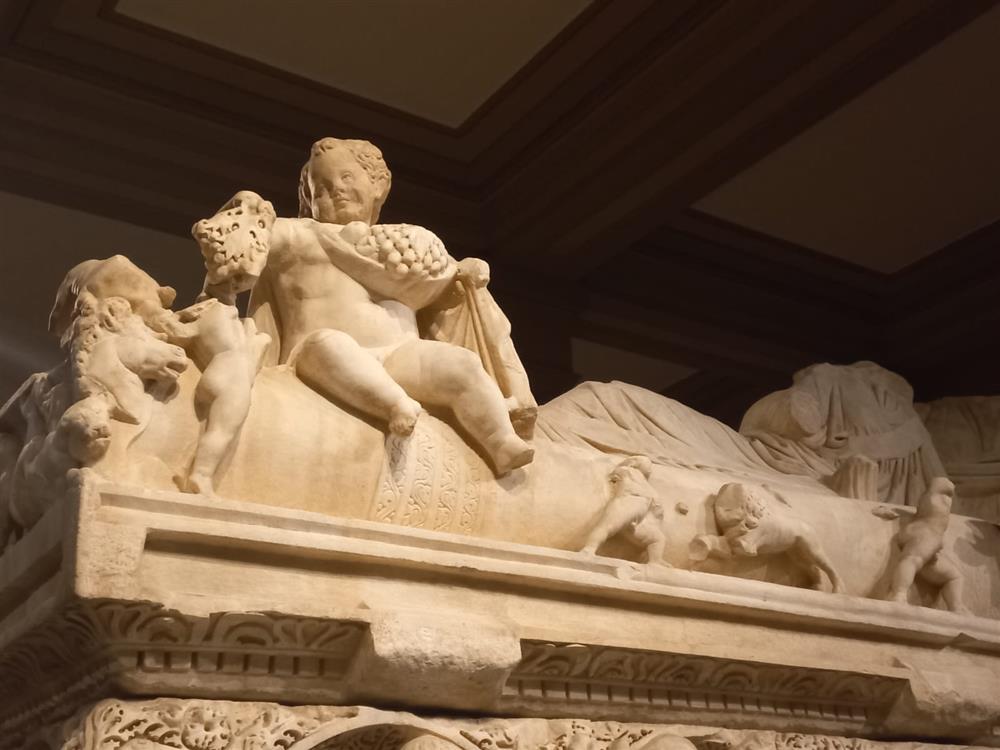 The Sidamara Sarcophagus, which is considered to be one of the largest sarcophagi of the ancient world and weighs many tons, has received 140 years later its missing piece, the Eros Head.

The sarcophagus belonging to the 3rd century AD, which is known by this name because it is located in the village of Ambar, formerly Sidamara, on the Konya Ereğlisi-Karaman road in the center of Turkey, is known as the heaviest sarcophagus in the world with its weight of 32 tons. The artifact was found in 1900 and brought to Istanbul by Osman Hamdi Bey.

As a result of the cooperation of the Ministry of Culture and Tourism with the Victoria & Albert Museum in London, the piece brought to Turkey on June 10 was reunited with the historical artifact it belongs to.

Eros Head, which was transported from London to Turkey with the support of the Ministry of Foreign Affairs and Turkish Airlines, was placed on the giant sarcophagus with a weight of more than 30 tons, with scientific studies carried out jointly by the expert restorers of the Istanbul Archaeological Museums and the Victoria & Albert Museum.

The columned sarcophagus from the Roman Period was opened to visitors in its original form at the Istanbul Archeology Museum today.

The Challenging Journey of the Magnifience Artifact

It was understood that the Eros Head, one of the high reliefs separated from the sarcophagus, which was discovered by the British Military Consul General Charles Wilson in 1882 and was buried again because it could not be moved, was taken to London.

The sarcophagus, which was re-discovered by a villager in the ancient city of Sidamara in Karaman in 1898, was reported to the Museum-i Hümayun, which is now the Istanbul Archeology Museum.

The giant sarcophagus, which was decided to be moved to the museum in Istanbul as a result of Osman Hamdi Bey’s investigations in the region, was moved to the center pulling with buffaloes under the conditions of the time. The magnificent work, which made a grueling journey with the special arrangement of the train wagons, reached today’s Istanbul Archeology Museum in 1901.

The Eros Head relief found in London was donated by Marion Olivia Wilson to the Victoria & Albert Museum in 1933 in memory of her father, Charles Wilson.

A plaster copy of the Head of Eros was placed on the giant sarcophagus in the Istanbul Archaeological Museums as a result of the negotiations with the Victoria & Albert Museum officials in the 1930s.

In 2010, as a result of Doctor Şehrazat Karagöz’s research that brought the issue back to the agenda, the Ministry of Culture and Tourism and the Ministry of Foreign Affairs conveyed the issue of exhibiting the Eros Head together with the sarcophagus to the Victoria & Albert Museum.

With the cooperation protocol signed between the Istanbul Archeology Museum and the Victoria & Albert Museum, the missing piece of the sarcophagus was brought to Turkey and placed in its place.

Republic of Türkiye Ministry of Culture and Tourism

Cover Photo: Republic of Türkiye Ministry of Culture and Tourism