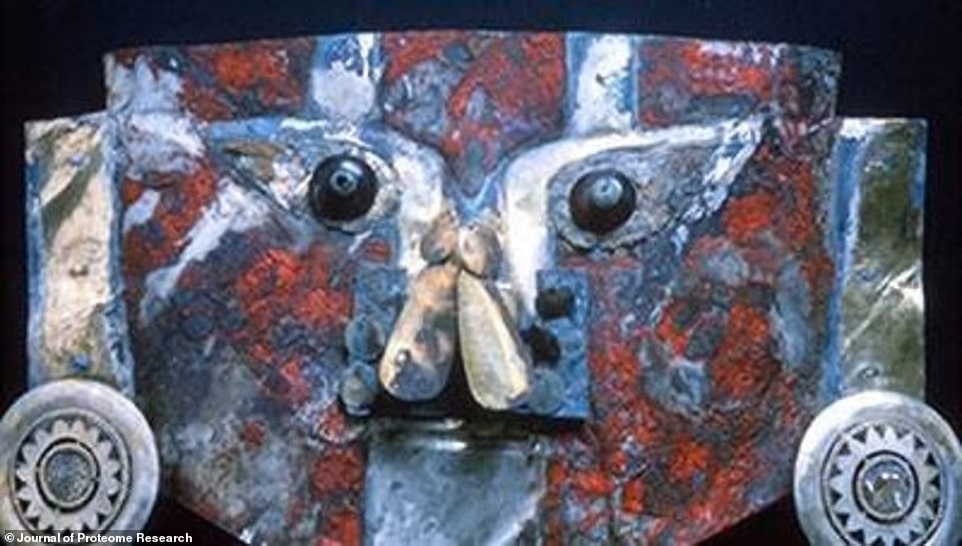 Traces of human blood have been discovered in the red paint that decorated a gold mask found on the remains of an elite man who died 1,000 years ago in the Sicán culture of Peru, a new analysis reveals.

The tomb was discovered in the 1990s, and researchers at the time determined that the red paint was cinnabar, a brick-red type of mercury, but the effective organic binder was unknown – until now.

The Sicán was a prominent culture that existed from the ninth to 14th centuries along the northern coast of modern Peru. The man, who was between 40 and 50 years old at the time of his death, lived during the Sicán that spanned from 750 A.D. to 1375 – an era known for its dazzling array of gold objects, many of which were buried in tombs of the elite class.

Researchers reporting in the American Chemical Society’s Journal of Proteome Research have analyzed the paint, finding that, in addition to a red pigment, it contains human blood and bird egg proteins.

A team of archaeologists and conservators led by Izumi Shimada uncovered a tomb in the early 1990s where an elite man’s sitting skeleton was painted crimson and positioned upside down in the chamber’s center. Two skeletons of young women in childbirth and midwifing stances were put close, while two crouching children’s skeletons were placed at a higher level. A red-painted gold mask, which covered the face of the man’s separated skull, was among the many gold objects discovered in the tomb.

The red pigment in the paint was identified as cinnabar at the time, but Luciana de Costa Carvalho, James McCullagh, and colleagues wondered what the Sicán people had used in the paint mix as a binding material, which had kept the paint layer attached to the metal surface of the mask for 1,000 years.

İzumi Shimada and his colleagues analyzed a small sample of red paint from the mask with the hopes of determining the organic binder.

The scientists discovered six proteins from human blood in the red paint using spectroscopy, a study of the interaction between matter and electromagnetic radiation. These proteins included serum albumin and immunoglobulin G. (a type of human serum antibody). Other proteins, including ovalbumin, were derived from egg whites. Since the proteins were so highly degraded, the researchers could not identify the exact species of bird’s egg used to make the paint, but a likely candidate is the Muscovy duck.

The identification of human blood proteins supports the hypothesis that the arrangement of the skeletons was related to a desired “rebirth” of the deceased Sicán leader.

Some believe Sicáns are descended from the Moche civilization, which flourished in the area from 100 A.D. to 700 A.D. The Sicán civilization placed a high value on the burial traditions of the aristocracy, who were frequently buried with magnificent grave goods. Another facet of Sicán funeral ritual that has lately attracted notice is that of human sacrifice – and it was largely women who were slaughtered and buried in men’s graves.