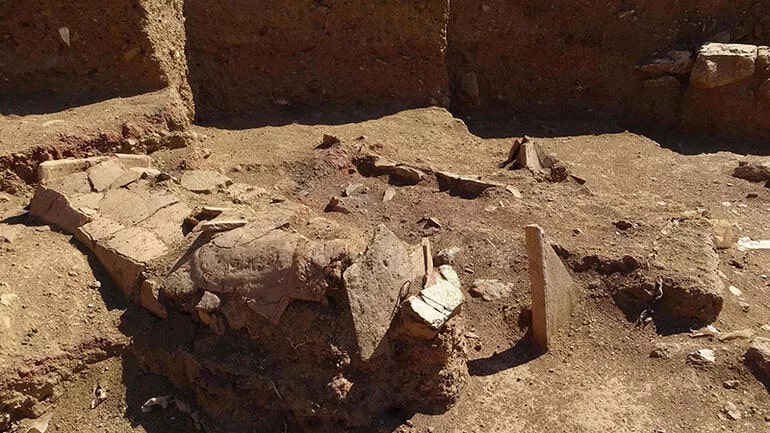 Archaeological excavations in the ancient city of Parion, the most important harbor city in the Hellenistic era, have uncovered  2,000-year-old graves of a mother and child.

Parion, also known as Parium, was a Greek city on the border between the historical lands of Troad and Mysia. Parion was an important harbor for the surrounding settlements in ancient times.

Parion, where the first systematic excavations started in 2005, has been understood to be one of the most important cities of the Troas region with the excavations carried out for 11 years and the archaeological findings.

Today the center of the ancient city is located within the borders of Kemer Village of Biga District of Çanakkale Province.

Archaeological surveys, excavation, and restoration of Parion Ancient City have been undertaken by teams led by Professor Vedat Keleş from the Archeology Department of the Ondokuz Mayıs University.

Professor Vedat Keleş of Ondokuz Mayız University’s Archaeology Department and the head of the excavations in Parion said that they determined one of the graves belonged to a woman and the other belonged to a child between 9 and 11 months old.

The excavations for this year began in April with the approval of the Ministry of Culture and Tourism, the General Directorate of Cultural Heritage and Museums, and the assistance of the Turkish Historical Society.

Highlighting that the excavations are focused on the four different sections, Keleş said: “The first is the Roman bath, the second is the theater, the agora and the shops while our work continues in the southern necropolis. So far, we have inventoried 100 items and conducted nearly 1,000 studies. The artifacts will be handed over to the Troy Museum at the end of the process.”

“We are starting to understand the importance of Parion for the region, especially during the Roman period because it had two ports with rich hinterland and played a very active role as one of the most important waterways of the ancient times,” he added.

Stating that the southern necropolis of the city was used from the sixth century B.C. to the fourth century, Keleş said: “Nearly 25 graves have been opened so far during this year’s work. These two graves are quite important as they are cremation tombs. Also, various terracotta pots, tear bottles and two rattles have been found in the tombs. Next to them, there are Eros figures showing that it is an abundant tomb. These graves are very important for us as they provide new data about the burial customs.”

“For the first time, we encountered brick tombs here. Therefore, it is an extremely important site. We also collected some coins that had been placed on the mouth of the dead or on the side of their hands and knees as a toll to Charon,” he added.

Charon, the son of Erebus and Nyx, was tasked with ferrying the souls of the dead across the rivers Styx and Acheron in Greek mythology.

Parion became a Greek city under Persian rule in 546 BC. When Alexander the Great invaded Asia Minor in 334 BC, Parion came under his control.

The city’s theatre, odeion, and baths can be accepted as solid proofs of this situation. Parion, which became a Christian city in the 5th century AD, is thought to have been an important Bishopric centre during the Byzantine period due to the presence of various priests who were sent here. An important detail about the city’s Christian period is that it became the Archbishopric Centre during the reign of Emperor Constantine Porphyrogennetos (911-959 AD).