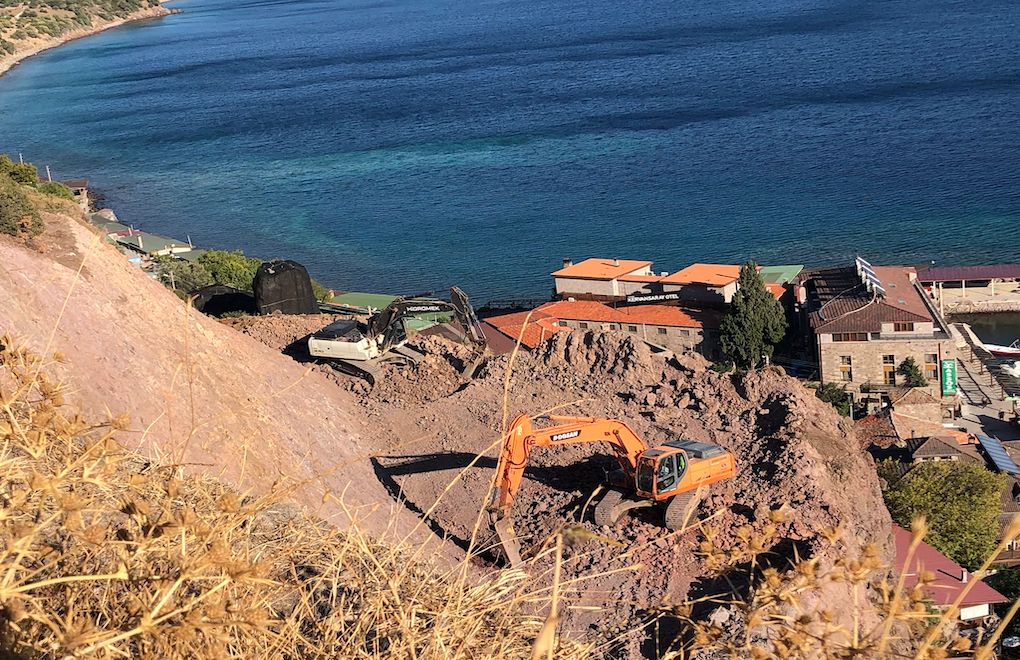 Among the continuing landscaping and restoration works at the historic city of Assos in the northern province of Canakkale, a large hill at the port has been cut, turning the region’s lush environment into dust, causing outrage among nature lovers.

Since the stones falling on the road leading to Assos Ancient City created a security problem, the ancient city was closed to visitors for 500 days and rehabilitation work was started.

The ancient city of Assos was closed to entrances with the conclusion of the tender made by the Ayvacık District Governorate in April.

During the rehabilitation works that started after April, the images that the construction machines disrupted the historical texture became the agenda on social media.

Two environmental organizations, Friends of Assos and the Protection of Natural and Cultural Properties in Mount Ida Society, made an effort to stop the landscape work and uploaded photos of the region before and after the work on social media.

While environmentalists applied for legal complaints, hotel owners in the region supported the landscape project saying, “Rocks from the hills fall on people on rainy days.”

“Things done with heavy equipment at Assos completely contradicts with the European Landscape Pact, which is in force since 2003,” archaeologist Nezih Başgelen told daily Milliyet on Oct. 1.

“The region flattened with bulldozers is an archaeological and protected site,” said Cem Tüzün, an official from Friends of Assos.

“This is a culture extermination,” he added.

However, the business owners in the region do not think the same.

Giving a firm response to those who criticize the work, Erdal Çakır, the head of Assos Hotel Owners Association,” said: “Five years ago, rocks fell from the hill on a vehicle and the roof of a hotel. Human life is under risk.”

Reminding that there is an official report highlighting this risk, Çakır asked: “Does anybody want that someone gets killed here?”

Tüzün, unlike Çakır, wants the project to stop to save the habitat.

“The project comprises of landscape on six parts. Unfortunately, three parts have been damaged; we are trying to save the remaining three,” he said.

Süheyla Doğan, another environmentalist, posed two questions to the authorities via her interview at the daily: “If rocks fell, why didn’t you think of an easier solution, such as installing barbed wires? Is it true that amid the excavation work, an ancient temple was found under the soil?”

Agreeing with the criticisms that the landscape has started looking ugly because of the works, Çakır said: “The vegetation cover is gone, and it looks ugly, yes. But, it will gain its charms after the landscape work.”

Friends of Assos and the Protection of Natural and Cultural Properties in Mount Ida Society demanded that the construction activities be stopped immediately, those responsible for the murder of Assos be brought to justice, and the destruction in the ancient city should be urgently rehabilitated with scientific methods.

The harbor city of Assos is an ancient city located in Behramkale village about 17 kilometers from Çanakkale’s Ayvacık district. The city, founded some 3,000 years ago, has been known as a famous teaching center since antiquity.