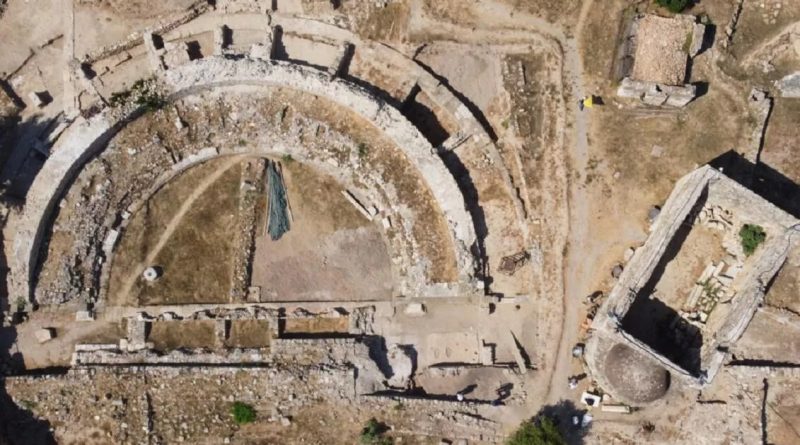 During this year’s excavations in the ancient city of Kelenderis, founded on the Mediterranean coast in the southern province of Mersin 2,800 years ago, a commercial production furnace and a child’s grave with glass bracelets and gifts inside have been discovered for the first time.

In the ancient city of Kelenderis, which is located next to the fisherman’s shelter in the Aydıncık district on the Mersin-Antalya D400 highway, the excavation and restoration/conservation works started in 1987 continue uninterruptedly.

There have been exciting developments in the studies carried out this year under the coordination of the Ministry of Culture and Tourism and Batman University.

For the first time, the skeleton of a child, who was buried with 4 solid glass bracelets on his arm, gifts, clothes and a wooden coffin, was found in the ancient city, where nearly 150 tombs were found around the Odeon in 35 years.

In addition, during the excavations conducted in the region, a furnace, which is thought to be used for tile production, was unearthed for the first time, documenting commercial production.

“Excavations continue for 12 months of the year in the ancient city of Kelenderis. This year, we have completed the excavation and consolidation of the caves, the sitting area, and the supporting walls behind the Odeon structure. Now we found a furnace that excites us. We knew for years that there was production here, but we couldn’t find the oven. The oven is 1,300 years old. We think that roof tiles were produced inside the furnace. Because during the excavations we carried out last year and this year, a large amount of roof tiles, dated to the seventh century, were found around the furnace. Since the roof tiles were faulty, we found them scattered around it. When we completely empty the inside of the furnace, we might find even more faulty roof tiles.”

Speaking about the child’s grave, Assoc. Dr. Mahmut Aydın said, “We have previously uncovered nearly 150 tombs here, but none of them had burial gifts. In this one, we uncovered four glass bracelets, an inscription on a ceramic piece, and a cup. This was a first. At the same time, there were several baby graves around this child’s grave. We understand from here that a part of the Odeon was used as a children’s burial area. When the carbon 14 analysis results come, we will be able to identify them more clearly. But we believe that this area was used as a burial area in the Middle Ages. As it is different from other burials, we will only be able to determine exactly when the child died with carbon 14 analysis.”

Assoc. Dr. Aydın added that excavation and repair works were carried out for 12 months in order to bring the ancient city of Kelenderis together with the visitors.