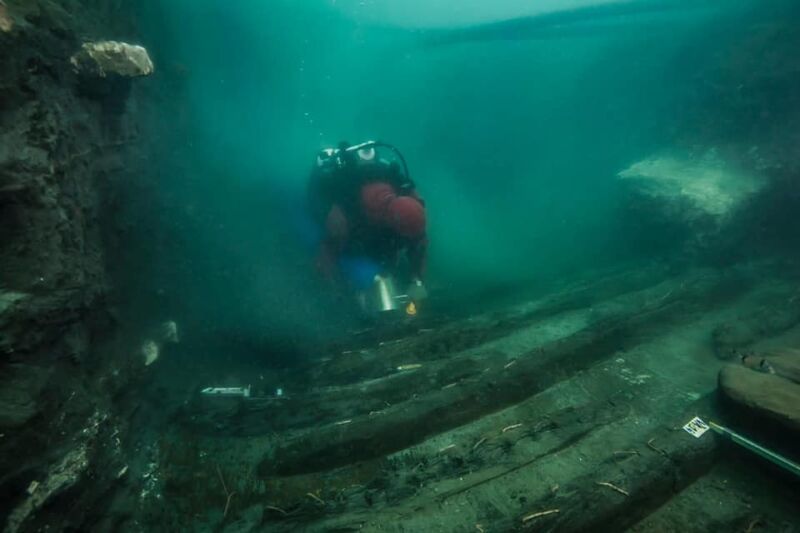 According to a press release by the Egyptian Ministry of Tourism and Antiquities, the Egyptian French archaeological mission of the European Institute of Shipwreck Archeology (IEASM) operating in the sunken city of Heraklion in Alexandria’s Bay of Abi Qir has discovered a warship wreck from the Ptolemaic period.

The ship, known as a swift galley, is 25 meters (82 feet) long and has a flat keel, which was popular for traversing the Nile River and the Delta, according to experts.

The archaeologists from the European Institute for Underwater Archaeology who discovered the wreck say it was probably a warship. Ships designed to transport freight or passengers are often broader, with a focus on capacity rather than speed and agility.

The shipwreck was recently found by archaeologists using a sub-bottom profiler, which is sonar equipment intended to hunt for items buried beneath the seafloor, similar to an acoustic version of ground-penetrating radar. It was five meters beneath clay and rubble from the destroyed Temple of Amun at the bottom of what was once a deep canal running through the old city.

The canal is now merely a deeper, mud-filled region on the bottom of Abu Qir Bay, but the clay helped preserve the old warship’s remnants.

“Finds of fast galleys from this period remain extremely rare,” said IEASM archaeologist Frank Goddio, who led the project. The Abu Qir Bay ship is only the second warship ever found from the last few centuries BCE—the Ptolemaic Period in Egypt and the era of the Punic Wars between Rome and Carthage. The other example is a Carthaginian warship dated to around 235 BCE. And the details of the Abu Qir Bay ship’s construction reveal one aspect of how Egyptian and Hellenistic cultures mixed in Ptolemaic Egypt.

They also found a large sail and evidence that ‘the ship was built in Egypt,’ according to a statement from the Egyptian Ministry of Tourism and Antiquities.

The ministry also said that the ship sank due to a devastating earthquake in the 2nd century BC, as a result of the temple’s collapse and huge blocks falling on it.

The burial was also covered with a pile of rocks, a tumulus, that was used in ancient times to signify burials.