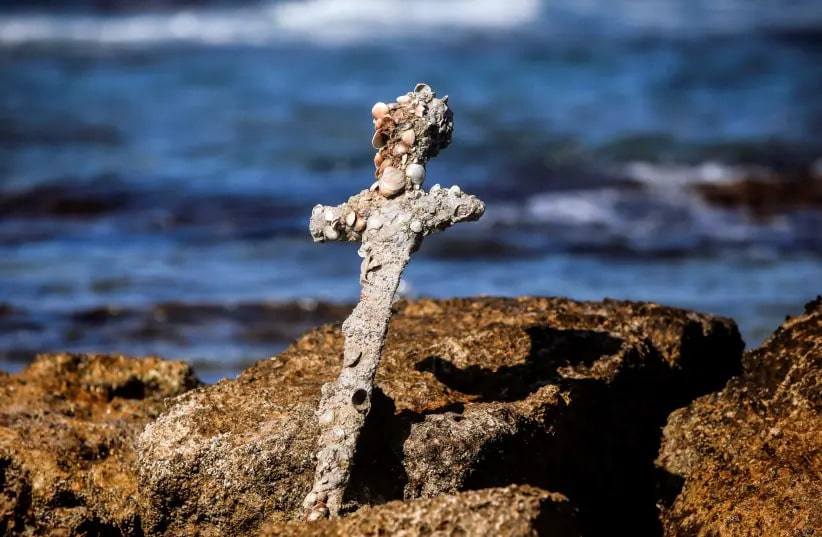 A meter-long sword dating back to the Crusader period was found by an amateur diver on the seabed off the Carmel Coast, the Israel  Antiquities Authority (IAA) announced Monday.

Diver Shlomi Katzin discovered some ancient ruins, such as pottery fragments, stones, and metal anchors, and a blade that may have resurfaced after the sand has moved. Worried that this artifact might be covered up again, he brought it to the surface and contacted IAA.

Despite being coated with marine creatures, the 1 meter-long blade, hilt, and handle were distinct enough to be noticed when undercurrents moved dunes that had buried it.

“The sword, which has been preserved in perfect condition, is a beautiful and rare find and evidently belonged to a Crusader knight,” said IAA’s Robbery Prevention Unit Inspector Nir Distelfeld.

Between the 11th and 13th centuries, European countries launched multiple military campaigns in the Middle East with the goal of freeing the holy places from Muslim authority, with the support of the Roman Catholic Church.

The Carmel Coast saw pivotal events in the Crusades’ history.

Because of the ever-changing circumstances, identifying archaeological remains on the seabed can be difficult. As a result, serendipitous discoveries can make a big difference.

The specific site where the sword was found was already known by the IAA. It was reportedly utilized as a natural anchoring as early as 4,000 years ago, during the Late Bronze Age, according to previous discoveries.

“The Carmel coast contains many natural coves that provided shelter for ancient ships in a storm, and larger coves around which entire settlements and ancient port cities developed, such as Dor and Atlit,” IAA’s Marine Archaeology Unit Director Kobi Sharvit noted. “These conditions have attracted merchant ships down the ages, leaving behind rich archaeological finds. The recently recovered sword is just one such find.”

The sword, believed to be around 900 years old, will be put on display after it has been cleaned and restored.