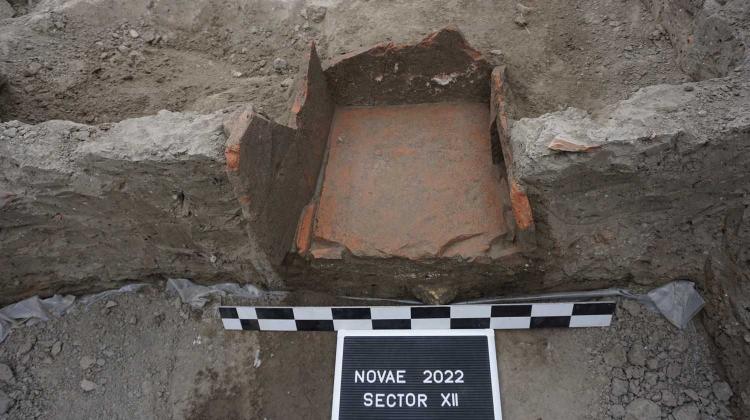 Polish archaeologists, during excavations at the Roman legionnaires’ camp in Novae, discovered a container that could be described as an ancient “fridge” made of ceramic plates for storing food.

The legionary fortress of Novae is an archaeological site on the Danube in northern Bulgaria, near the town of Svishtov. It was founded in the middle of the first century AD.

The 1st Italian legion was based here for most of its existence and its presence is confirmed until the 30s of the 5th century AD. In the area of ​​the camp, which covers 17.99 ha, monumental buildings have been discovered, the most important of which is the headquarters building (principia), although the legionary hospital (valetudinarium) and baths (thermae legionis) are equally impressive.

There was a civil settlement (canabae) on the west side of the camp, and a necropolis on the south and east side. In late antiquity, the fortifications of Novae were reinforced, and an additional area (the so-called annex) was attached to the camp from the east, covering an area of ​​approximately 8 ha. At that time, both soldiers and civilians lived within the walls. Traces of the latest Roman activity date back to the end of the 6th century.

Researchers from Poland and Bulgaria have been excavating the fortress for several decades, with Professor Piotr Dyczek of the University of Warsaw currently in charge of the project.

During this season’s excavations, the team found a container made of ceramic plates recessed beneath the floor, which was used as a “fridge” by the fort’s inhabitants to store food. The container was discovered in a military barracks room.

Within the container, the team found pieces of ceramic vessels and small baked bone fragments, in addition to charcoal and a bowl which the team suggests may have been a censor for driving away insects.

Professor Piotr Dyczek said that the discoveries of such “fridges” are rare.

Another find this year is a collection of several dozen coins. Most come from strata covering the period from the incursion of the Goths in the Middle Ages. From the 3rd century to the beginning of the reign of Constantine the Great (early 4th century).

Archaeologists have also unearthed entire strings of walls and the remains of a Roman dwelling containing querns. Wells, weaving and fishing weights, reels, and vessel fragments were discovered.