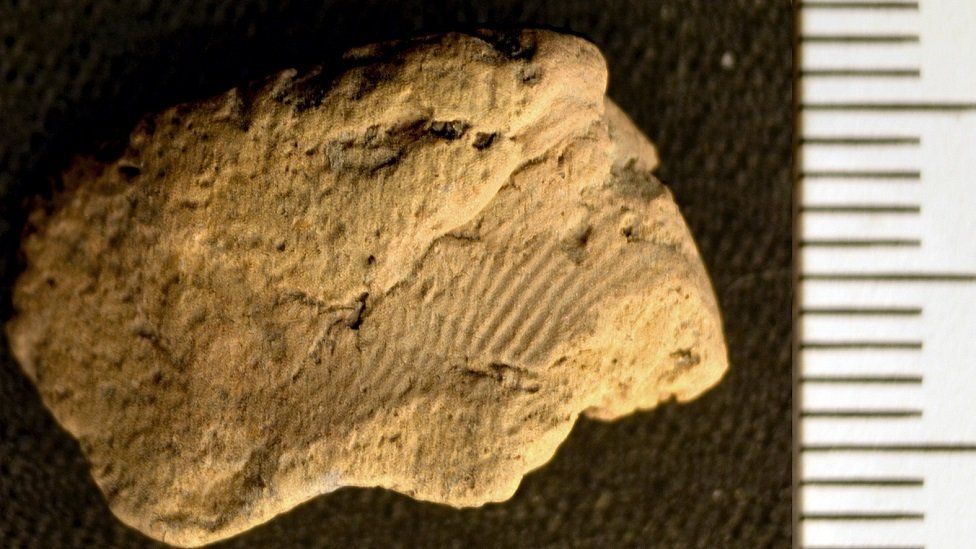 Fingerprints were found on a pottery dating back 5,000 years in the Orkney archipelago, located in the northern region of Scotland, which has the oldest historical settlements on the European continent.

In Orkney, a fingerprint left by a potter 5,000 years ago was discovered on a clay vessel.

Archaeologists have been excavating the complex of ancient buildings in the center of the Neolithic Orkney World Heritage Site since 2006. Many finds were found during these excavations. The last of these was the fingerprint on the piece of pottery. The fingerprint was discovered on a surviving fragment of the object at the Ness of Brodgar archaeological site.

Ness of Brodgar is the most important excavation site of the Archaeological Institute of the University of Highlands and Islands (UHI).

The fingerprint left after the potter pressed a finger into wet clay was revealed using imaging technology.

Roy Towers, a ceramics specialist, noticed the potter’s fingerprint while examining a sherd – a fragment – of pottery from a massive assemblage of clay pieces recovered from the site – the largest collection of late Neolithic Grooved Ware pottery in the UK.

Multiple images of the same subject are taken, each with a different regulated light source.

These are combined with computer software to produce a highly detailed model of the object that can be illuminated from all angles and studied closely on screen. The resulting images often reveal surface details not visible during a normal examination.

Jan Blatchford’s RTI work verified and registered the only fingerprint found at the Ness of Brodgar in this case.

UHI said ancient fingerprints were not uncommon and research had been carried out into them for a number of years.

Archaeologists hope analysis of the Ness of Brodgar fingerprint will reveal the gender and age of the potter.

Excavation director Nick Card said: “Working on such a high-status site as the Ness of Brodgar, with its beautiful buildings and stunning range of artefacts, it can be all too easy to forget about the people behind this incredible complex.

“But this discovery really does bring these people back into focus.

“Although finding the fingerprint impression won’t hugely impact our work, it does give us a highly personal, poignant connection to the people of Neolithic Orkney, 5,000 years ago.”