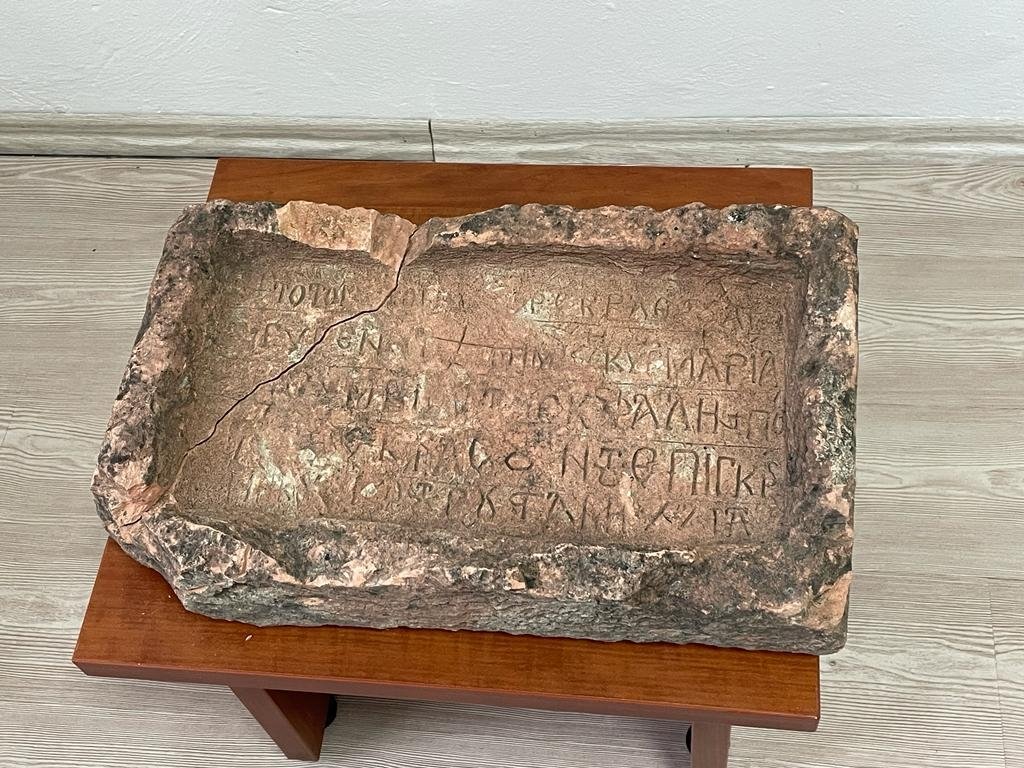 On Giresun Island, which is 1.2 kilometers (0.7 miles) off the Turkish province of Giresun on the Black Sea’s southeastern shore, a 14th-century inscription was discovered.

The island, which has been known by many names such as Aretias, Nesos, Areos, and Khalkeritis throughout history and has traces of life since the ancient ages, is the subject of many legends and mythological narratives. Excavations have been sustained on this beautiful and mysterious island under the supervision of Giresun University Faculty of Fine Arts faculty member associate professor Gazanfer Iltar since 2009.

Iltar’s team has discovered a written artifact on the island for the first time this year with the unveiling of a 14th-century inscription. Iltar said that the inscription is of great importance as it will shed light on the history of the island and the Giresun region.

Noting that the inscription was found on the floor of the tower structure on the island, the academician continued: “The artifact belongs to the period of Alexios III Megas Komnenos, the emperor of Trebizond. The inscription states that the structures and walls on the island were commissioned by the venerable Maria, the wife of Pinkernes Kyriakos, the son of Giresun Governor Roustam. The name of Roustam in the inscription also gives us clues about the strategic marriages between the Turkmen beys in the region and the Komnenos dynasty.”

The inscription was made of terracotta, measures 30 by 50 centimeters (11 inches to 19 inches), and was written with goose feathers.

Explaining that the inscription was translated by an academic from Russia, Iltar said: “The inscription provides us with several pieces of information and perspectives. For example, the title of ‘pinkernes’ means the cupbearer of the emperor of Trebizond. It is actually a high court position in terms of diplomacy, and a pinkernes should be considered one of the closest people to the emperor. Therefore, it is understood that the governor of Giresun at the time was very close to the emperor of Trebizond.”

“The importance of the inscription increases even more as it reveals the relations in the region in the past and it is a unique work written in a regional alphabet of the Empire of Trebizond,” Iltar added that archaeological excavations will continue on the island in 2022 as well.

Giresun Island is one of the two islands in the Black Sea, with a total area of 38,000 square meters.

The ruins of the city walls surrounding the island, second-century temple ruins, church ruins, chapels, water wells, and many tomb structures believed to have been built in the 12th century reveal the life and historical richness of the island. In order to reveal the historical fiction of Giresun Island, archaeological surveys were carried out for two years in 2009 and 2010 and many findings were made.

In light of these findings, the archaeological excavations continued in 2011 and 2012 in collaboration with the Giresun Museum and Selçuk University’s archaeology department.

Giresun Island archaeological excavations continued in 2015-2016-2017, and in these excavations, areas where various ceramics, frescoes, mosaics, used as wine cubes, Byzantine period coins, and many skeletons were unearthed.

The island, where “Amazonian” women once lived, is mostly known for mythological stories like how Hercules came to the island to find golden fur.