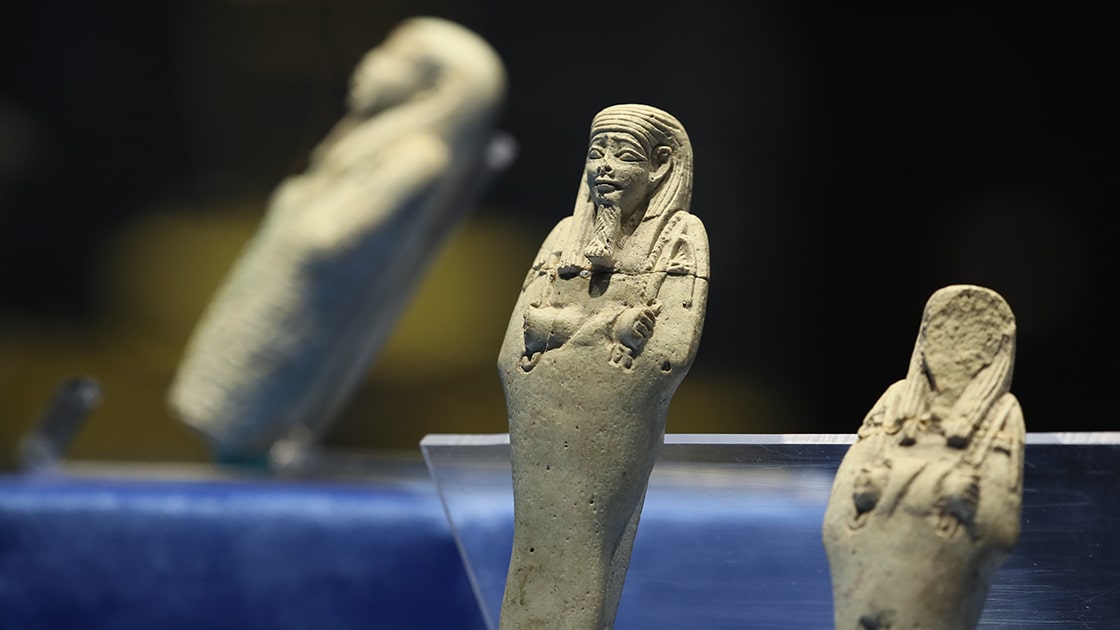 The 2,700-year-old “Ushabti” statuettes, discovered in archaeological digs in western Turkey and used in Egyptian burial ceremonies, are being shown for the first time at an archeological museum in the Aegean Izmir province.

Ushabti figurines are important finds in terms of showing the political, social, cultural, and economic relations established between Egypt and Anatolia.

The figurines, which have been preserved in the warehouses of the Izmir Archeology Museum for nearly 80 years, were opened to visitors until the end of September as part of the “You Will See What You Don’t See” project.

In ancient Egyptian tombs, ushabti figurines, which are tiny statuettes made of wood, stone, or faience, are frequently found in great numbers.

The figurines, with hieroglyphic inscriptions saying “ready for calls of duty of gods,” will remain open to visitors in the treasury hall of the Izmir Archaeological Museum until the end of the month.

“According to Egyptian religion, when the deceased awoke in the hereafter, the ushabtis would likewise awaken and do whatever menial chores that the deceased had been assigned. Egyptians relied extensively on agriculture in their everyday lives, and it was thought that this would continue in the afterlife, thus most ushabtis are portrayed clutching agricultural instruments like hoes or seed sacks to continue their farmwork in the hereafter,” Hunkar Keser, the director of Izmir Archaeological Museum, told Anadolu Agency.

Keser said that another important feature of the figurines is the writings on them. “Each figure was generally engraved with a brief spell from the Book of the Dead to ensure the ushabti understood what to perform. This spell was designed to bring the ushabti to life and gave the ushabti instructions for performing work on behalf of the deceased.” Keser noted that hieroglyphic inscriptions were found especially in the leg section of Ushabti.

“We know that Anatolia and Egypt had very important deep-rooted relations in the fields of politics, culture, art, and trade in every period of history,” she said.