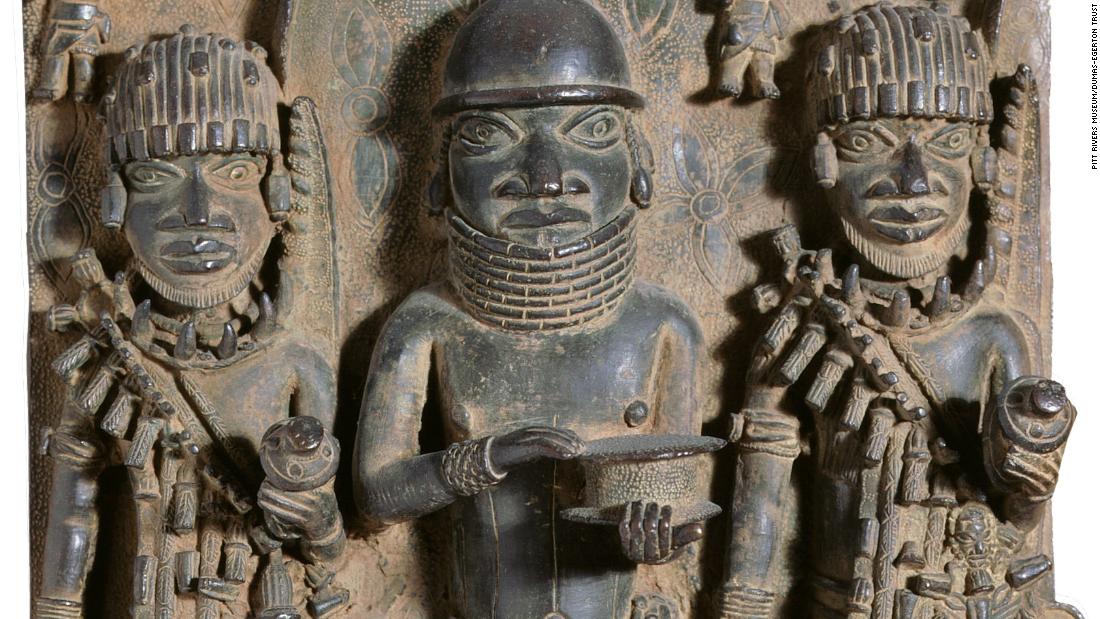 Since Nigeria gained independence in 1960, Nigeria has been calling for the return of stolen Benin bronzes (including brass reliefs, bronze sculptures, and a set of ivory carvings). Today, the largest collection of these objects is located in the British Museum.

Aberdeen University was not indifferent to this call. The bronze sculpture depicting an Oba (king) of Benin was acquired by the University in 1957 at auction and is considered a magnificent example of late-period Beninese art.

The University of Aberdeen initiated a conversation through Professor Bankole Sodipo, professor of law at Babcock University in Nigeria, with the National Commission of Museums and Monuments of Nigeria through its legal adviser, Babatunde Adebiyi, the Edo State Government through the then-Attorney General and Commissioner of Justice, Professor Yinka Omorogbe and the Royal Court of the Oba in Benin through Prince Professor Grzegorz Akenzu in 2020.

The Nigerian Federal Government provided support through the Federal Ministry of Information and Culture and its Minister Alhaji Lai Mohammed.

Through this dialogue, the University of Aberdeen became the first institution to agree to complete repatriation from the Benin Bronze Museum.

Neil Curtis, Head of Museums and Special Collections said “The University of Aberdeen has previously agreed to repatriate sacred items and ancestral remains to Canada, Australia and New Zealand, and has a procedure that considers requests in consultation with claimants.

“An ongoing review of the collections identified the Head of an Oba as having been acquired in a way that we now consider to have been extremely immoral, so we took a proactive approach to identify the appropriate people to discuss what to do,” he said.

The University’s governing body supported the unconditional return of the Benin bronze to Nigeria.

Professor George Boyne, Principal and Vice-Chancellor of the University of Aberdeen said: “I welcome the decision of the University of Aberdeen Court to support the return of the Benin bronze. This is in line with our values as an international, inclusive university and our foundational purpose of being open to all and dedicated to the pursuit of truth in the service of others.

“It would not have been right to have retained an item of such great cultural importance that was acquired in such reprehensible circumstances. We, therefore, decided that an unconditional return is the most appropriate action we can take, and are grateful for the close collaboration with our partners in Nigeria.”

Alhaji Lai Mohammed, the Minister of Information and Culture of Nigeria said: “The reaching out by the University of Aberdeen and eventual release of the priceless antiquity is a step in the right direction. Other holders of Nigerian antiquity ought to emulate this to bring fairness to the burning issue of repatriation”.

The proposed West African Art Edo Museum is championed by Godwin Obaseki, the current governor of Edo State, Nigeria, where the Kingdom of Benin, the ancient capital of Nigeria, fell. This modern museum will become part of an unprecedented cultural center that will include the museum and other cultural heritage infrastructure, including Oba’s Palace.

It is implemented through an independent trust established by the Edo State Government in cooperation with the National Museum and Antiquities Commission and the Royal Benin Palace (“Inheritance Restoration Trust Fund”). This cultural center was designed by the famous architect Sir David Adjaye. The finally returned Benin bronzes will ultimately be stored in this proposed museum.

Many museums are discussing Benin bronzes in their collections and are supporting the establishment of the Edo West African Art Museum in Benin to exhibit returned items under contracts made by all parties.

What are the Benin bronzes?

Benin bronzes are a group of thousands of items that were taken from the kingdom of Benin, in what is now Nigeria, in 1897 (their exact number is unknown). These objects—including figurines, tusks, sculptures of Benin’s rulers, and an ivory mask— have been looted by British troops and have since been scattered around the world and most of the works are now in state museums in Europe. Contrary to the name, not all works are made of bronze.

Source: The University of Aberdeen