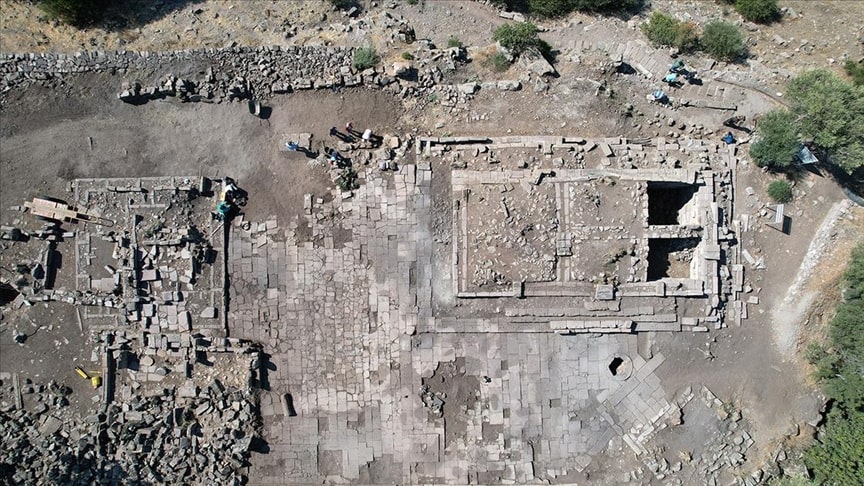 The foundations of the Temple of Athena were unearthed during the ongoing excavations in the ancient city of Aigai, located near the modern village of Yuntdagi Köseler in the province of Manisa, Turkey.

Aigai Ancient City, one of the 12 cities founded by the Aiol people, is also known as an important religious site. Archeological, data show that one of the most important gods in the city was Apollo.

Very similar to the temple of Athena in Pergamon

Manisa Celal Bayar University Faculty of Arts and Sciences Archeology Department lecturer Associate Professor Yusuf Sezgin stated that the main point of the excavations this year was the discovery of the Temple of Athena, and said that they finally reached the foundations of the temple.

Pointing out that the Temple of Athena and other artifacts were greatly affected by this destruction, especially during the Byzantine Empire, when works belonging to the pagan faith were destroyed by Christian groups, Yusuf Sezgin said to AA correspondent.

“This is one of the most important points of the city. The people living in this region in ancient times were pagan, that is, polytheistic. There are two important gods and goddesses for Aigai. One of them is Athena and the other is Apollo. The temple of Apollo in the city is also very important, we knew its location, but we did not know the location of the temple of Athena. Especially in the studies we carried out this year, we encountered many finds related to the goddess Athena. Based on the finds we obtained in this respect, we can say that this temple was dedicated to the goddess Athena. This place is very similar to the temple of Athena in Pergamon. It’s almost exactly the same in terms of the plan.”

Sezgin said that he considers the mussel remains from the excavations to be very valuable and said, “While digging the foundations of the temple, we found the remains of a meal eaten there in the original foundation filling. The remains of this dish were the remains of the clam, which we call ‘aquvadis’. It was obviously left in the filling as the remains of the food eaten during the construction there. This is a deliberate relic. It’s a ritual, those scraps are left there because they consider them sacred. I think the leftovers of the food eaten by construction workers in ancient times are very valuable.” used the phrases.

The ancient city, whose name comes from the Greek word “aíga” (goat), is often referred to as “the city of goats”. The people of Aigai used coins with goats minted on them and regularly engaged in the trade of goods produced from goat hair, bones, and skin.

Excavations in the ancient city began in 2004 and have yielded numerous important discoveries, including a temple dedicated to the goddess Demeter, a stadium, a theater, and a three-story agora.

Aigai became a regional point of economic and cultural attraction during the Hellenistic period in the 3rd century B.C. with the support of the Kingdom of Pergamon.

2,200-year-old Greek sling bullet may have been used against Jews in Israel