Three Italian researchers have voiced doubts about whether St. Peter’s bones are buried underneath the Rome basilica that bears his name.

According to research, the bones of St. Peter may have been interred in catacombs underneath the Mausoleum of St. Helena after being relocated from the Vatican hillside during anti-Christian persecutions in the third century.

The researchers called their findings “conjecture,” but said archaeologists could “validate” them with “excavation campaigns.” However, a leading Christian archaeologist and member of the Pontifical Commission for Sacred Archaeology told Vatican News that the researchers’ hypothesis was “unacceptable.”

The purpose of our study is to research Peter’s memory ad catacombs. According to the Depositio Martyrum—a document of the late Emperor Constantine period—there was no memory of the first St. Peter’s Basilica on the Vatican Hill. We start with a critical analysis on the Roman Basilica attributed to Emperor Constantine in Liber Pontificalis, then we deepen the search of Peter’s memory in the catacombs of the Sts. Marcellinus and Peter (ad Duos Lauros), also known as Tor Pignattara. Indeed, the basilica and mausoleum built in this cemeterial area are the only buildings attributable, with certainty, to Emperor Constantine, who wished to be buried in the mausoleum, close to an apostle. Besides some striking archeological finds on Peter’s memory already discovered near a particular cubicle in these catacombs, a geometrical and mathematical study of the unusual architectonic characteristics of the basilica and mausoleum of Tor Pignattara shows that the buildings were part of a single architectonic plan, very likely designed for coding data useful to locate Peter’s burial site unambiguously, in the area of the cubicle mentioned.

Vincenzo Fiocchi Nicolai, an expert in Christian archaeology and a member of the Pontifical Commission for Sacred Archaeology, however, told Vatican News that the researchers’ hypothesis was “unacceptable.”

Fiocchi Nicolai said that Emperor Constantine would never have built St. Peter’s Basilica in the 4th century “if it had not been contingent upon the presence of the venerated remains” below. That is the spot where St. Peter was martyred and where his tomb had been venerated since early Christian times, he said.

“It is clear that Peter’s remains were found in the place of the original burial site on the Vatican hill when the formidable Constantinian basilica was built, the biggest basilica ever established in the city,” Fiocchi Nicolai said.

Excavations of the necropolis under St. Peter’s Basilica began in the 1940s near a monument erected in the 4th century to honor St. Peter. In 1968, after bones were discovered and scientifically confirmed that they belonged to  a 60- to 70-year-old robust male, Pope Paul VI announced that the “relics” of St. Peter had been “identified in a way which we can hold to be convincing.” 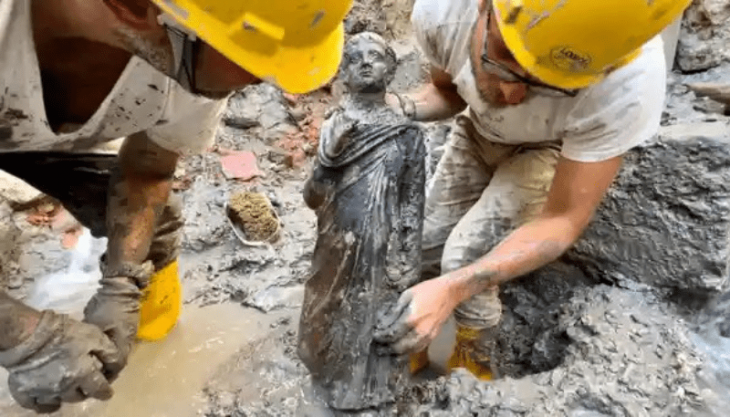