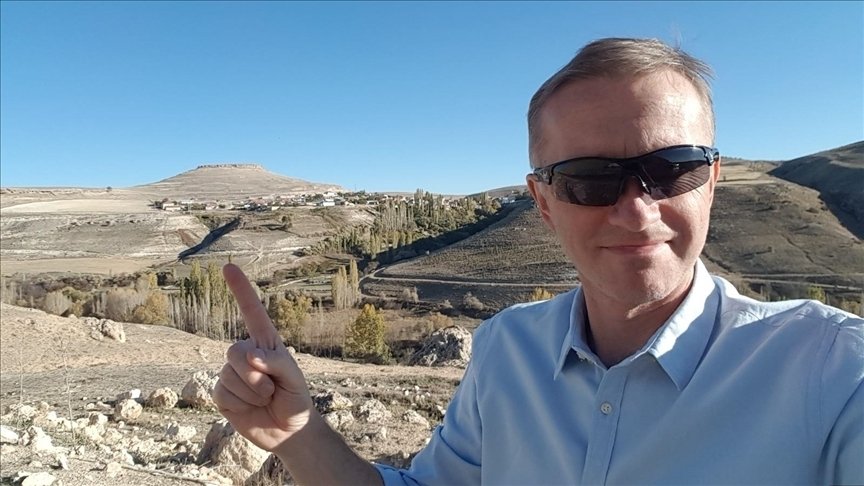 Robert D. Rokicki, a diplomat in the Polish embassy in Ankara used a unique method of “histracking” to find the location of the lost ancient city of Thebasa in south-central Anatolia.

Polish diplomat found Thebasa in 2021 in the Pinarkaya village of southern Karaman province.

Rokicki told, “In fact, I was looking for a different place related to the popular legend of the seven sleepers, Thebasa’s discovery was a bit accidental.”

He added that he “looked around” because historical and archaeological puzzles have been his passion for many years. Although he is an economist by education, he also studied art history at the Jagiellonian University.

Over the last two centuries, many scholars and travelers attempted in vain to find this city. Among them was a famous British author, adventurer, and statesperson Gertrud Bell.

The last known proposal of Thebasa’s position was submitted by an Austrian academician Gertrud Laminger-Pascher in 1991.

The city of Thebasa occupies a small but distinctive place in history and according to Roman geographer Pliny, it lay in the Taurus mountains and was one of the most prominent cities of the province of Lycaonia, a large region in the interior of Asia Minor.

Rokicki said Thebasa is not Troy, but played some role in history. He said that he happened to discover it by accident while trekking through the wild landscapes of Anatolia.

“I can freely perform my favorite way of tourism here, which I call ‘histracking’ – off-road hiking in search of historical places. It combines natural and cultural discovery. Turkey is the world’s best destination for this kind of activity, as it is rich in historical monuments, natural wonders and provides a friendly environment,” he said.

According to Rokicki’s research, Thebasa and its castle gained new significance after the Muslim conquest of Cilicia, when it became one of the crucial fortresses on the eastern border of Byzantium.

“In 793, Thebasa surrendered to Abdurrahman bin Abdalmalik’s army due to water scarcity; in 805 it was restored on the initiative of Emperor Nikephoros I, and in 806 was destroyed during the great campaign of caliph Harun ar-Rashid,” he explained.

“Due to the scanty and ambiguous information, the city has been searched for in various places, often very distant from one another,” it added.

According to Professor Stephen Mitchell, one of the greatest researchers of Asia Minor, a fellow of the British Academy and honorary secretary of the British Institute at Ankara, the study resolves a long-standing riddle of Asia Minor historical geography and helps to understand some previously intractable problems of roads and communication routes between Konya and Adana.

“His (Robert D. Rokicki’s) work adds a whole new chapter to the story of the conflict between the Byzantines and the Arabs in the 10th and 11th centuries,” he said.

Thebasa has been searched for almost two centuries with at least eight different locations considered. Its position away from the main, or rather known routes, concealed it not only from assailants but from scholars and travelers as well.