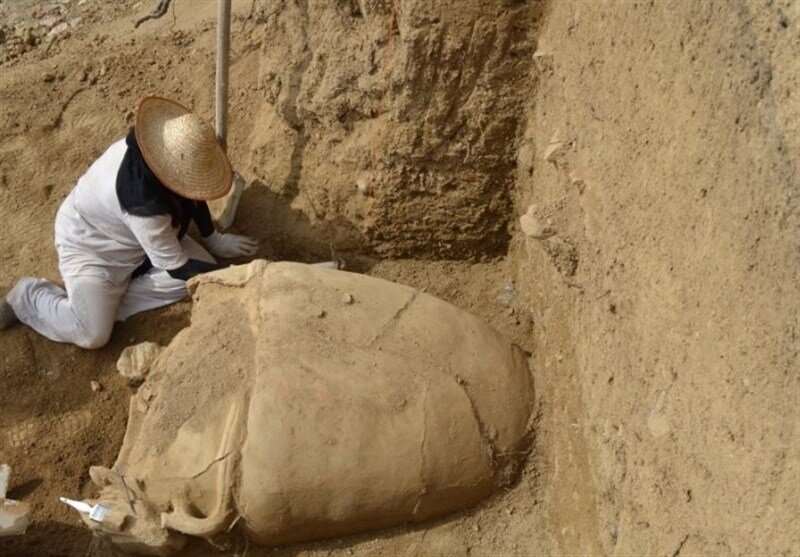 An ancient cemetery with urn-like tombs was discovered in Ahvaz, the capital city of Khuzestan province in southwestern Iran.

The cemetery was accidentally found during an oil drilling project off the Karun river in Ahvaz city.

Situated about 150 meters from the river, the cemetery has yielded ancient human remains some beige-colored urn tombs that are coated with natural tar, Iranian archaeologist Hossein Feizi told ILNA on Tuesday.

The Iranian expert said the vase tombs were placed toward the river and were probably built according to the principles of Mithraism.

Archaeologist Hossein Feizi said, “The fact that this type of burial is toward the river strengthens the hypothesis that this cemetery and its burials had links with Mithraism,”.

In pre-Zoroastrian Iran, Mithraism was the worship of Mithra, the Iranian deity of the sun, justice, contract, and battle. Known as Mithras in the Roman Empire throughout the second and third century CE, this deity was revered as the patron of imperial loyalty. Mithraism rapidly declined with the embrace of Christianity by Emperor Constantine in the early fourth century.

Preliminary researches show the cemetery dates back to the time of the Parthian Empire (247 BC – 224 CE), which once stretched from the northern reaches of the Euphrates, in what is now central-eastern Turkey, to eastern Iran.

According to Tehran Times, “This type of burial in urns was especially dedicated to babies and young children, since the Neolithic era. But the peak of the use of this burial method can be observed and followed during the Parthian period.”

As mentioned by Feizi, the newly-discovered urn tombs can be compared and contrasted with the ones previously discovered in Shoghab (cemetery) of Bushehr province.

Covering five hectares of land, Shoghab cemetery, which is located on the outskirts of Bushehr, is adjacent to other magnificent sites which date from the Elamite (3200 – 539 BC) and Sassanid (224 CE-651) eras. Previous excavations there have revealed three types of burial, including rectangular tombstones, rectangular pit tombs made of stone, and (giant) urn pits (stretched) in the east-west direction.

Elsewhere in his remarks, Feizi reminded that many researchers believe the southern parts of Khuzestan – and in particular Ahvaz and its surroundings – were once permanent settlements from the Sassanid era onwards.

“The discovery of this new cemetery in Ahvaz well indicates human settlements in the late Parthian period,” the archaeologist said.

Concerning the fact that the new discoveries are made during an oil drilling project, Cultural Heritage activist Mojtaba Gahestuni has expressed worry that the site may not be protected.

“Now, a new ancient site has been discovered in the area of an oil company’s workshop, and there is a concern that this site will not be explored. This area needs to be explored, saved, preserved, and registered nationally,” ILNA quoted Gahestuni as saying on Tuesday.

Urn tombs or urn-type tombs; It is the type of burial in which the cremated remains of the dead are buried in a vessel in cremation-type burial rituals. The term is especially often used for funerary urns, vessels used in burials, either to hold the cremated ashes or as grave goods.