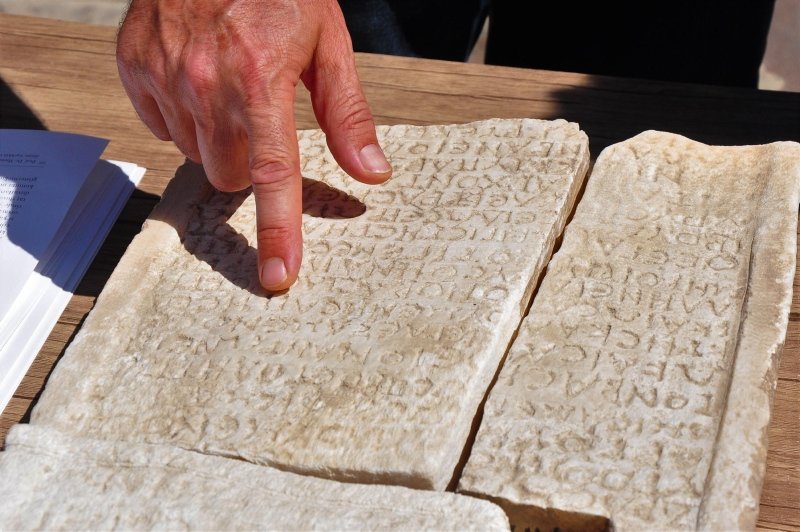 The 1800-year-old inscription, consisting of 3 pieces of marble, found in the excavations in the ancient city of Aigai in western Turkey’s province of Manisa, was deciphered.

Aigai was established on the Gün Mountain in the Yund Mountain Range, which was named Aspordene in ancient times. The ancient city, whose name comes from the Greek word “aíga” (goat), is often referred to as “the city of goats”, which is not surprising considering its high altitude and rocky lands.

The inscription was found during the excavations in the parliament building in the ancient city of Aigai in 2005.

In the inscription, it is stated that the people of Aigai sent an envoy named ‘Fortunatus’ to the Roman emperor, reporting their complaint about the different collection of taxes from goat skin by each collector and demanding that this situation be resolved. It turned out that the Roman Emperor, who took into account the complaints and demands of the Aigai people, fixed the taxes taken from goat skin at a rate of 1 in 6 and stated that he would punish the tax collectors who did not comply with this rule.

Heading the excavations in the ancient city of Aigai, Manisa Celal Bayar University Department of Archeology Associate Professor Yusuf Sezgin drew attention to the importance of the inscription in proving that the economy of the city was based on goats and goat skins.

Associate Professor Sezgin said, “The first excavations in Aigai started in 2004. In the parliament building where the excavations started, 3 marble pieces belonging to an inscription were found the following year. The inscription was partially studied and translated by Professor Hasan Malay. But we lose our teacher last year. It was deciphered by doing detailed researchs on it. This inscription is very valuable, especially its presence in the parliament already reveals its value. The inscription confirms that the basis of the city’s economy was based on goats and goat skins,” he said.

Associate Professor Sezgin continued: “Aigai literally means goat. It is geography suitable for goat breeding in its geography. For the first time, we have come to a situation where we can saying this with an inscription. It is an inscription written 1800 years ago and it was placed in the parliament. It must be one of the most important issues of the city. Determining the taxes collected by the Roman emperors and fixing them. Thanks to the inscription, the city’s relationship with goat skin confirmed our theories that the city’s economy was based on goat skin. In this respect, it is an important inscription that we have newly presented to the world of science.”

Aigai, also known as Aigaiai or Nemrutkale, is thought to have been founded in the seventh century B.C. in the ancient region of Aeolis, which includes the land between the modern district of Ayvack in Çanakkale and downtown Izmir. It was a member of the Aeolian dodecapolis, a 12-city confederation.

The city reached its golden age during the reign of the Hellenistic Attalid dynasty that ruled the land from three to two B.C.

On account of a severe earthquake in 17 B.C., which caused irreversible damage to the Aegean coast as well as Aigai, the city was rebuilt in subsequent decades. Aigai was deserted in the third century A.D. and remained unoccupied for about a millennium. The archaeological discoveries in the area date back to the Eastern Roman period and support the theory that the city was resettled by the Byzantines and used as a small settlement for a Christian congregation.

You can find details about the ancient city of Aigai here.