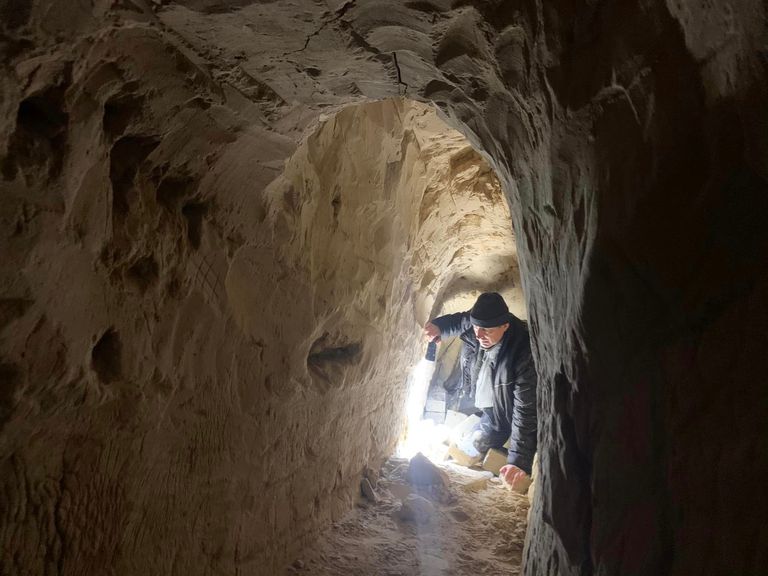 An ancient cave complex thought to date from Kievan Rus’ has been discovered in central Kyiv at Voznesensky Uzvoz.

Dmytro Perov, a conservationist at Kyiv’s Center for Urban Development, told Radio Kultura that the caves were discovered next to a demolished house that Kyiv housing authorities had deemed unsafe for habitation.

Actually, Dmytro Perov followed his grandmother’s clues.  Perov’s grandmother used to talk about a large stone house next to an old cave, but no one knew its location of it. According to Perov, who had previously examined the area several times, only the front facia of the house remained, concealed by bushes.

The conservationist told reporters that he and his friends decided to go to the old house “on a small expedition to look for caves,” and they discovered an entrance. The first archaeological explorations in the Voznesensky Caves were carried out by Perov and a group of researchers from the Institute of Archaeology last Saturday. Timur Bobrovskyi, an archaeology professor at the Sofia Kyivska reserve, said he was “amazed that such a treasure was found in the center of Kyiv” after spending three hours exploring the cave.

The team discovered pottery fragments from the Late Kyivan Rus’ era, an Eastern and Northern European state that existed from the late ninth to the middle of the thirteenth century, in the cave’s northern section.

Perov wrote on Facebook that the team scoured around 40 meters (131 feet) of caves, including the lower cave complex, which he claims is twice as long as the upper passage and has a series of “radial branches.” The most significant discovery, according to Petrov, was “a set of Kyivan Rus hieroglyphs and Varangian symbols from the Early Rus period,” when the region was under the control of Varangian rulers.

While more investigation is required to confirm it, according to Dmytro Perov, they think that some of the carved symbols may date all the way back to the fifth or sixth centuries BC. He says that “animistic images of animals and graffiti” from the Varyaz period, including the rune Algiz (“chicken’s foot”), were also discovered on the walls. This was an ancient Varangian charm, a symbol of safety and longevity.

Several Hellenic Greek colonies were established on the northern coast of the Black Sea, on the Crimean Peninsula, and along the Sea of Azov between the 7th and 6th centuries BC. The steppe hinterland was occupied by the Cimmerians, Scythians, and Sarmatians who traded with the Greek/Roman colonies after a period of control by the Roman empire during the first millennium BC.

Rurik, a Varangian or Viking prince, established the Kyivan state in the latter part of the ninth century. Up until the 13th century, his descendants established and controlled a global trade route to the west. However, the Kyivan state was made up of East Slavic, Norse, and Finnic peoples, making it difficult to determine who left the carved symbols on the cave walls.