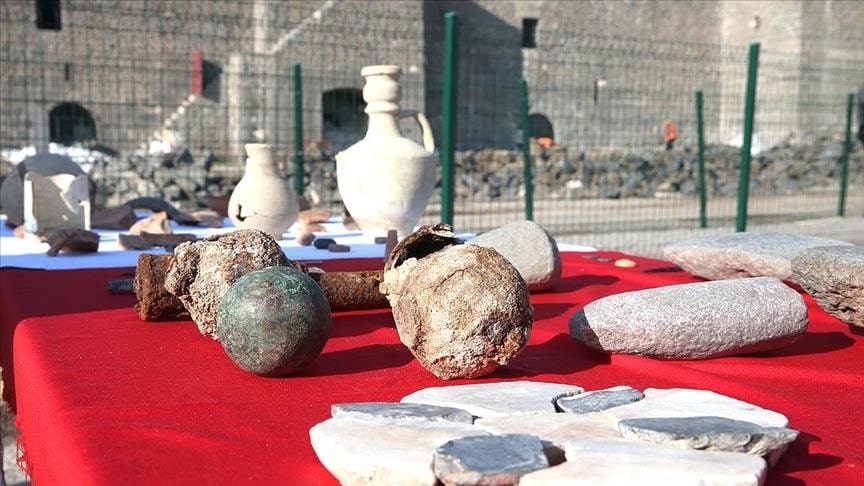 The most recent archeological investigations at the 9,000-year-old Amida Mound in southeastern Turkey’s Diyarbakir province have uncovered fresh finds that shed light on the region’s past.

This year’s excavations at the site were recently completed, with archaeologists unearthing several 800-year-old marble pieces adorning the Artuqid Palace, the seat of the Diyarbakır branch of the Artuqid dynasty, said professor Irfan Yıldız from Dicle University, head of the archaeological team, who spoke to Anadolu Agency (AA).

“We believe that the marbles were used for decorative and ornamental purposes, especially for flooring, at the palace in the 13th century,” Yildiz said.

The historical Sur district, where the mound is located, was home to many ancient civilizations, including the Hurrians and Mitannis, Urartians, Assyrians, Persians, Romans, Umayyads, Abbasids, Artuqids, Seljuks, and the Ottomans.

Archeological work at the Amida Mound, which is known as the “heart of Diyarbakir”, has been ongoing since 2018 with several exciting new findings made in 2021.

The historic city of Diyarbakır is home to innumerable ancient wonders and relics from throughout history.

Today, Diyarbakır is home to the Hevsel Gardens which have been used for agricultural purposes for more than 8,000 years, the Great (Ulu) Mosque, one of the oldest mosques of Anatolia, and the Malabadi bridge built during the Artuqid period in the 12th century.

Meanwhile, the Hasuni Cave city where pre-historic people lived during the early years of Christianity, and the Zerzevan Castle, which is a Roman military facility containing the temple of Mithraism, a mysterious religion, are also located here.