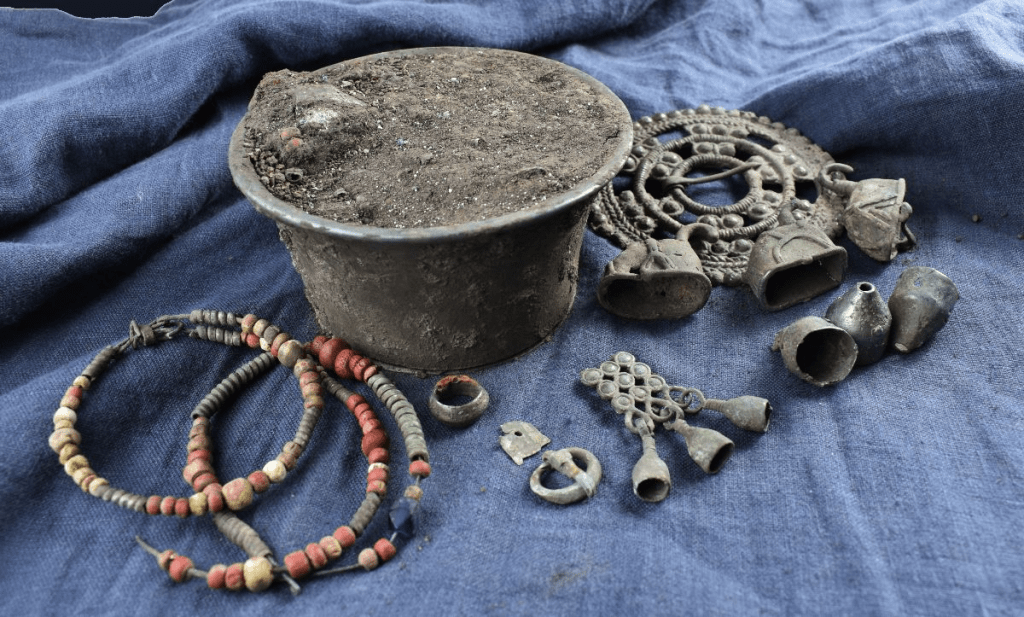 The twentieth season of fieldwork brought an unexpected discovery to the Institute of Archeology of the Russian Academy of Sciences.

During the continuous research of one of the previously unexplored areas of Suzdal Opolye, a woman’s jewelry treasures dating to the middle of the 1st millennium AD were discovered.

The treasure was found in Russia‘s Suzdal Opolye region, near the Nerl-Klyazminskaya river. This is the first treasury of Volga-Finnish women’s jewelry of the era of the Great Nations Migration, located on the territory of Suzdal Opolye. Previously, such items have never been found in this region.

The treasure consists of ornaments for a traditional female costume, typical of the Volga-Finnish culture, and an imported metal bowl. The Volga Finns (sometimes referred to as the East Finns) are a historic group of Russian indigenous peoples living near the Volga River.

Artifacts include objects made of non-ferrous metal, made in the style of Volga-Finnish cultures of the 1st millennium AD. and are distinguished by high artistic qualities.

The find lifts the veil on the “Finnish prehistory” of Suzdal Opolye, which today is mainly known as one of the ancient Russian centers of culture and settlement.

The history and nature of Suzdal Opolye’s development in the first millennium are yet unknown. Traditionally, it is thought that the ancestors of the Slavic people in the area of North-Eastern Russia were one of the Volga-Finnish tribes, known in Russian chronicles as “Merya.”

It includes a fragmented headpiece, three bracelets, and more than 300 small beads, possibly embroidered on a rotten garment, consisting of many elements such as spiral beads, lamellar rings, overlays, and various inserts.

Six casts hollow “duck” pendants hanging on a leather string with threaded metal beads, typical of Finno-Ugric civilizations occupying the area between the Volga and the Urals, as well as a circular openwork fastening plate, were also unearthed by the researchers.

The image of a waterfowl was also common in the Volga-Ural region at the end of the 1st century – the beginning of the 2nd millennium AD, however, the early pendant-duck species are represented by several examples. They were previously unknown in Suzdal Opolye. Similar pendant forms are known in the ancient artifacts in the Kama region, especially in the Azelin culture, belonging to the second quarter of the 1st millennium AD.

According to manager Nikolai Makarov of the Russian Academy of Sciences‘ Institute of Archaeology, “These are not just collected items: they are elements of a woman’s costume. The find lifts the veil over the “Finnish prehistory” of the Suzdal Opolye, which is known today to historians and archaeologists mainly as one of the centers of ancient Russian culture. Further research of the objects of the treasure and the settlement will make it possible to understand how Opolye was developed in the period preceding the Slavic colonization.”

Archaeologists believe the ornaments were hidden in a box made of birch bark near the settlement’s center, but the motive for hiding the treasure remains unknown.