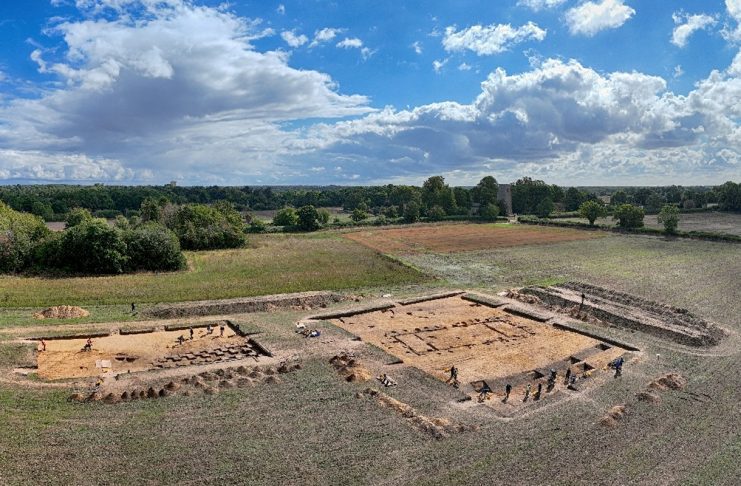 Archaeologists, evidence of a 1,400-year-old royal Hall of the first Kings of East Anglia has been discovered in Rendlesham, Suffolk, United Kingdom.

The hall was discovered during a community excavation as a part of Suffolk County Council’s Rendlesham Revealed project. The hall was first discovered through aerial photography in 2015. An ongoing investigation of the archaeology of the Deben valley is being conducted as a result of a pilot project that was carried out at Rendlesham between 2008 and 2017 and revealed traces of an Anglo-Saxon royal settlement.

The 23 m long and 10 m wide Hall is a part of a royal compound that is six hectares in size and is located within a larger settlement that is over fifty hectares in size. Between AD 570 and AD 720, this served as the administrative hub for a significant region of the East Anglian kingdom that was centered on the River Deben Valley.

Professor Christopher Scull, the project’s principal academic advisor (Honorary Visiting Professor, School of History, Archaeology and Religion, Cardiff University), said it was the “most extensive and materially wealthy settlement of its date known in England”.

The authority said the hall was “recorded in the writings of The Venerable Bede of the 8th Century”.

Bede was an author, teacher, and scholar, and his most famous work, Ecclesiastical History of the English People, gained him the title “The Father of English History”.

Bede’s writings identified Rendlesham as the place where the East Anglian King Aethelwold stood sponsor at the baptism of King Swithelm of the East Saxons between the year’s AD 655 and 663.

Professor Christopher Scull said: “The results of this season’s excavation are of international importance. Rendlesham is the most extensive and materially wealthy settlement of its date known in England, and excavation of the Hall confirms that this is the royal residence recorded by Bede.

“Only at Rendlesham do we have the wider settlement and landscape context of an early English royal center together with an assemblage of metalwork that illuminates the lives and activities of its inhabitants across the social range. Together, these are radically re-writing our understanding of the sophistication, complexity, and international connections of society at that time.

“It has been wonderful working with our terrific team of partners and volunteers, who should be proud of what they have achieved. Their work is a major advance in our understanding of the early East Anglian Kingdom and the wider North Sea world of which it was a part.”

The excavations also revealed a perimeter ditch enclosing the royal compound, remains of food preparation and feasting that showed the consumption of vast quantities of meat – mainly beef and pork – and dress jewelry, personal items, fragments of glass drinking vessels, and pottery.

Traces of earlier settlements from the Roman period (1st Century AD) and the early Neolithic period (4th Millennium BC) were also found.