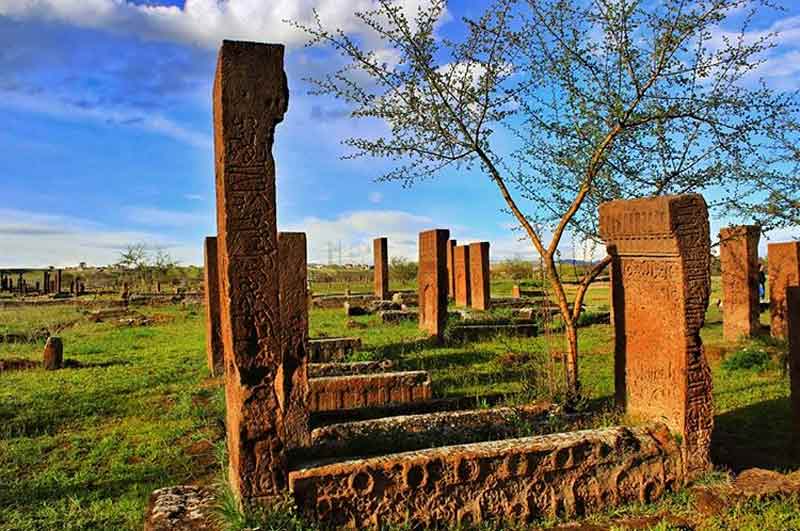 We would not be exaggerating if we say that Ahlat, which is a naive district of Bitlis on the shore of Lake Van surrounded by Nemrut and Süphan mountains, is the entrance gate of the Turks to Anatolia. This historical district embraced many states and dynasties from the Urartians to the Ottomans due to its natural beauty and fertile plains. This region bears traces of all the civilizations it hosted in the past; Thus, the Seljuks named it “Kubbet-u Islam”, Ottomans “City of Ancestors” and the Evliya Celebi “City of Oghuzs”. The center of Old Ahlat is called Harabe-i şehir (Ruin-city).

Ahlat has turned into an open-air museum with its magnificent history. It is a huge open-air museum filled with castles, mosques, bridges, baths, and lodges from the Seljuks. The world’s largest Turkish-Islamic open-air cemetery is also located here. Time-defying tombstones and especially vaulted tombs make Ahlat a center of attraction.

The tombstones found in the Seljuk Square Cemetery are works of art decorated with reliefs, inscriptions, and motifs that shed light on the history of the region.

These Seljuk tombstones in eastern Turkey are getting prepared to be introduced to the world as part of a project.

A 10-person team, including restorers and art historians from Italy, will join excavation works headed by Recai Karahan, a professor from Van Yüzüncü Yıl University, at the cemetery that has 8,103 tombs in a 210-decare area.

Exhibitions will be opened in Ahlat and Italy with an introductory film on the cemetery and photos of tombstones, each of which is a historical artifact.

“The lichens on the stones are cleaned with hard work to reveal the rich decorations on the tombstones,” Mikail Ercek, curator at Ahlat Museum, told Anadolu Agency.

“The decorations revealed are handled with great delicacy. It’s impossible not to admire these tombstones,” said Ercek.

He said that nearly 200 of the tombstones are standing.

“This is the source for being the first artifact left by our ancestors in this tradition in Anatolia. It is possible to see the versions of the motifs here in different parts of Anatolia,” he said.

Use of new techniques

Necati Aktekin, coordinator of the project from the district governorship, said the project is intended to preserve cultural heritage.

“Our aim is to see the different restoration techniques used in Italy and show the techniques applied in Ahlat to create new techniques for restoration,” said Aktekin.

“In addition to promoting the Seljuk Cemetery abroad, we also aim to restore our stones and make them more qualified,” he added.