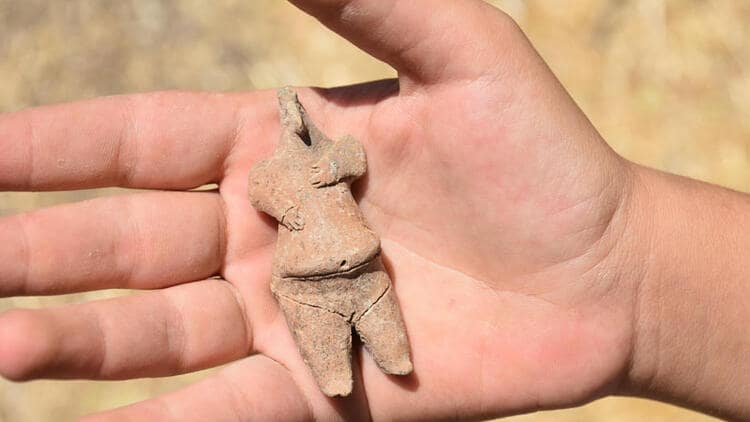 A 7,800-year-old female figurine was found in the Ulucak Höyük (Ulucak Mound) in the Kemalpaşa district of Izmir.

It was stated that the figurine made of clay was used in various rituals such as increasing abundance and fertility. Generally, such artifacts are found broken and the number of artifacts found as a whole is quite low. A very rare artifact. Third work ever found as a whole.

With the support of the Turkey Ministry of Culture and Tourism, İzmir Metropolitan Municipality, Kemalpaşa Municipality, and Kemalpaşa Organized Industrial Zone, excavations in İzmir’s oldest settlement, the 8,850-year-old Ulucak Höyük, started this year as well.

Trakya University Faculty of Letters Protohistory and Near Eastern Archaeology Faculty Member of the Department Professor Dr. Özlem Çevik took over the excavation directorship in 2009, and the first find of this year was unearthed during the work on the mound.

Earlier excavations revealed that Ulucak Mound hosted the first farmers of the Aegean Region; It had revealed that the first settlers built their houses on top of each other along the 7.5-meter cultural layer and settled in the same place for 1150 years without interruption.

Ulucak Mound, located in the Ulucak district of Kemalpaşa county on the 15th km of Bornova-Ankara road, was the location of one of the oldest settlements of Western Anatolia and it illuminates cultural history both by its architectural structure and its foundlings. Excavations were started in 1995 and three cultural layers were identified. These are the Late Roman period at the top; the Early Bronze Age layers underneath Early Byzantine settlements and the Late Neolithic settlement at the bottom.

In the excavations, a large number of ceramic pots, tools made of ganister, stone weapons, mother goddess figurines, and anthropomorphic pots were unearthed, some of which are exhibited in the Izmir Archeology Museum.