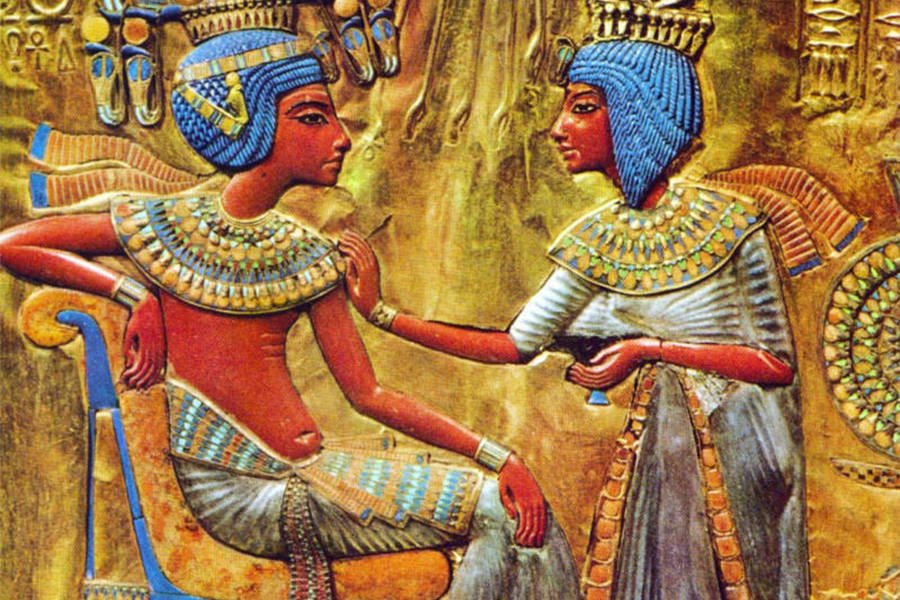 Ankhesenamun was born around 1350 BC as the daughter of King Akhenaten and Queen Nefertiti.

The life of Ankhesenamun, who opened her eyes to the world as a princess, was not as easy as it might seem. Rather than being a pharaoh’s daughter, she became famous for the treasure-laden tomb of King Tutankhamun or King Tut.

Because Ankhesenamun was both King Tut’s half-sister and his wife.

Egypt was experiencing religious turmoil during this period, and There was a dynasty that wanted to continue its power. In fact,  Incestuous marriages among the ruling class weren’t unprecedented.

It seems that Ankhesenamun’s marriage to Tutankhamun may not be her first inter-family marriage or her even the last.

Ancient Egyptian rulers thought their lineage was sacred and descended from the gods. Therefore, incest seemed a logical choice for them. Inter-family marriages, then, were about keeping a sacred bloodline pure.

Not understanding genetics, they were unable to grasp the dangers of incest – and paid the price for it. While his parentage is uncertain, many point to Tutankhamun as an inbreeding victim, citing evidence of clubfoot and other serious congenital health problems in his remains.

Historians have uncovered convincing evidence that the mysterious royal lady could, as Pharaoh‘s third daughter, serve as the bride of her father Akhenaten after Nefertiti’s death – but before she married her brother Tutankhamun.

Akhenaten was in the process of overhauling the centuries-old Egyptian religious tradition towards monotheism in a striking and unprecedented way. He may have wanted to secure his dynasty during this period.

This decision had the potential to weaken the entire Egyptian power structure. Moreover, the abolition of the authority of the powerful priests meant that the dynasty was left alone.

The departure from Amun-Ra and the rest of the Egyptian pantheon, initially gradual, had a dramatic impact on the Egyptian state. With priests stripped of their rights, control passed to the military and central government;  bureaucracy reigned and bred corruption.

Egypt’s greatest religious revolution ended with the death of Akhenaten and Tutankhamun ascended the throne.

Tutankhamun married his teenage sister, Ankhesenamun, and together they quickly withdrew from their father’s radical religion.

They first changed their names, presumably under pressure from the priests. Tutankhaten, meaning “the living image of Aten,” changed the suffix in his name to “Amun,” swapping his father’s sun disc for the traditional sun god of the Egyptian pantheon.Ankhesenamun, formerly Ankhesenpaaten, followed suit.

The very young king and queen made rely on advisors to rule the country. This situation led to more confusion.

King Tut was suffering from many diseases. he probably had trouble walking without support. This hypothesis was confirmed by the discovery of hundreds of ornate canes in his famous tomb.

Tut’s reign, though famous, was brief. The king died at the age of 19. Many theories have been put forward about his death. However, research has shown that the cause of death was a broken leg.

The latest thinking on Tut’s death blames an infection that resulted from a fracture in his left thigh — not the result of a chariot accident, since the king, with a number of physical impairments, probably could not have raced. His immune system weakened from several bouts of malaria, couldn’t fight the infection.

The king was dead and Ankhesenamun had to take care of himself.

What Happened To Ankhesenamun After Tut Died?

Ankhesenamun may have next married Ay, a powerful advisor who was close to both her and Tut — perhaps because he was also her grandfather. But the historical record is unclear.

It is possible to say that life was difficult for him after the death of the king. After all, the king and queen had never had a child either.

She may have been the author of an undated letter to Suppiluliumas I, the king of the Hittites. An Egyptian queen says in her letter that her husband is dead and asks the king of Hitit to send one of her sons to Egypt as a wife.

Ankhesenamun disappears from the historical record sometime between 1325 and 1321 B.C. — an absence that to historians signals her death. Some historians referred to her as Egypt’s Lost Princess, as no one knew exactly what happened.

Ankhesenamun’s role in one of Ancient Egypt’s most contentious periods was lost deliberately, excised from the annals of history by the new dynasty that rose to power just decades later.

The new rulers branded Akhenaten as a heretic, they cleared him and his descendants from the list of pharaohs.