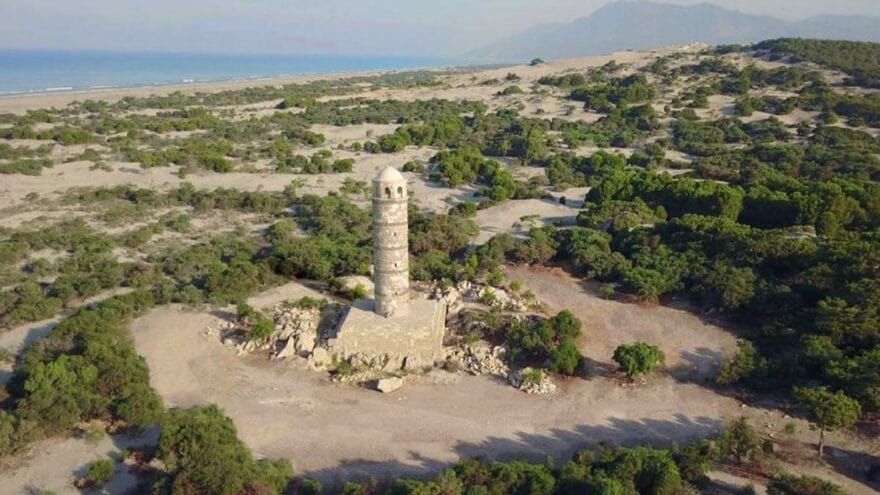 Artificial intelligence technology was used for the reconstruction of the lighthouse, which is located in the ancient city of Patara, built by the Roman Emperor Nero and estimated to have collapsed in the tsunami in 1481.

Patara Ancient City, located in the present Ovagelemiş Village at the southwestern end of the Xanthos Valley between Fethiye and Kalkan (South of Turkey), was accepted as 2020 Patara Year by the Ministry of Turkish Culture and Tourism. Patara also has special importance with its archaeological and historical values as well as being one of the rare beaches where the Mediterranean turtles Caretta-Caretta lay their eggs and breed for millions of years.

Excavations in Patara Ancient City, the capital of Lycia, started in 1988. Prof. Dr. Fahri Işık and his wife Prof. Dr. Havva İşkan Işık Hundreds of historical artifacts, especially the Lycian civilization, have been unearthed in the excavations initiated by.

One of the most important works unearthed in Patara excavations is the lighthouse built by Roman Emperor Nero in 64 AD. Exactly 12 years after the excavations started, It was determined that the lighthouse unearthed by Prof. Dr. Havva İşkan Işık contained 2,500 original stones.

2 thousand 500 stones are being combined

The lighthouse is being built on the completed 6-meter podium by replacing the stones that cannot be used statically due to falling from height.

According to the news of the DHA agency; The application tender was made by the Antalya Governorship Investment Monitoring and Coordination Directorate (YIKOB) Cultural Heritage Directorate.

In the 15th century, a technical report was prepared in order to prevent the collapse of the lighthouse, which was thought to have been destroyed due to the Rhodes earthquake and the tsunami that occurred in the Mediterranean, in a possible earthquake or tsunami in the years after its reconstruction. In accordance with the report prepared by Dr. Cenk Üstündağ, materials such as steel spiral, steel pipe, steel rods, pure epoxy resin adhesive, carbon-fiber mesh reinforcement, the high-strength natural hydraulic lime-binder mortar will be used in the reconstruction.

X-rays of 2 thousand 500 stones were taken

During the long years of excavations, 2,500 stones were taken one by one in the stone hospital established in the field, and their original locations were determined with the help of a computer program by using artificial intelligence technologies after the physical and chemical examinations carried out in the laboratory.

Şahabettin Öztürk, the head of the Department of Architecture at Van Yüzüncü Yıl University, the scientific consultant of the reconstruction process, where Havva İşkan worked in the field together with the architectural team, explained that approximately 2 thousand 500 stones excavated were laser studied in three dimensions and all dimensions were scanned.

It was under the ground for nearly a thousand years

Doctor Öztürk pointed out that the stones remained under the sand after the collapse of the lantern, and that the stones were preserved in the reconstruction today provides a great advantage. Noting that the physical and chemical properties of each stone are analyzed in the laboratory, Dr. Öztürk, Although it is not first-degree evidence, some data about the general location of the lighthouse were used on some coins belonging to the Nero period.

Stones worked with concave and convex surfaces made of polygonal and rectangular stones meet their positions only when they are placed in their real places. The reason for the long duration of the study is that the stones in the stone hospital were individually x-rayed and analyzed whether there was tissue loss in the interior. The rotten ones should not be used, the solid ones should be used one to one” he said.

Explaining that the Revit program, which is the building system software, is used to determine the original locations of the stones, Dr. Öztürk said, “All data were processed in the program. Approximately 2 thousand 500 stones were found to be 80-90 percent compliant with many trials and error methods in the computer environment.

In my opinion, it is assumed that 80 percent original stone and 20 percent new stone will be used from the preliminary data we have obtained. In this way, the lighthouse will be restored and this is not a restoration, but a reconstruction process, that is, reconstructing the structure, ”he said.

There is no example in the World

2 thousand approximately 80 percent of the annual rebuilt with the original stones in terms of a lighthouse indicating that the first application in Turkey Dr. Öztürk explained that there are no examples in the world, of which 80 percent original materials are used. Dr. Öztürk, In this sense, it is an important structure that we can call the first application. “It is an architectural texture that rises in an upward spiral on a cylindrical body of approximately 26.5 meters in height and 6 meters in diameter.”

On the lighthouse, which is stated to be the prestige project of the Roman Emperor Nero, there is an inscription in gold letters about who it was built by and the date of its construction. In the stone inscriptions unearthed during the excavations, there is a statement addressing Patara Council and the governor of the Patara people at the time, Sextus Marcius, “We thank you for governing the people of Lycia rightfully, without taking bribes and for adorning our city with beautiful monuments for eight years”

A monument of universal value

“When our works initiated by the Antalya Governorship and Investment Monitoring and Coordination Directorate in Patara in 2020, which was accepted with the proposal of our Minister of Culture and Tourism and the approval of our President, our country will have another monument of universal value.

I express my gratitude to all of them as a scientist. For our lighthouse, which is a candidate to become one of the symbols of Antalya, we continue our work in a multidisciplinary manner and using high technology. On this lighthouse, which is one of the prestige buildings of the Roman Empire, Nero says, “I made it for the salvation of the sailors.” We are working for the day when we will be proud to present this lighthouse to our country and to the heroic sailors of this country. ”

Source: Republic of Turkey Ministry of Culture and Tourism, DHA