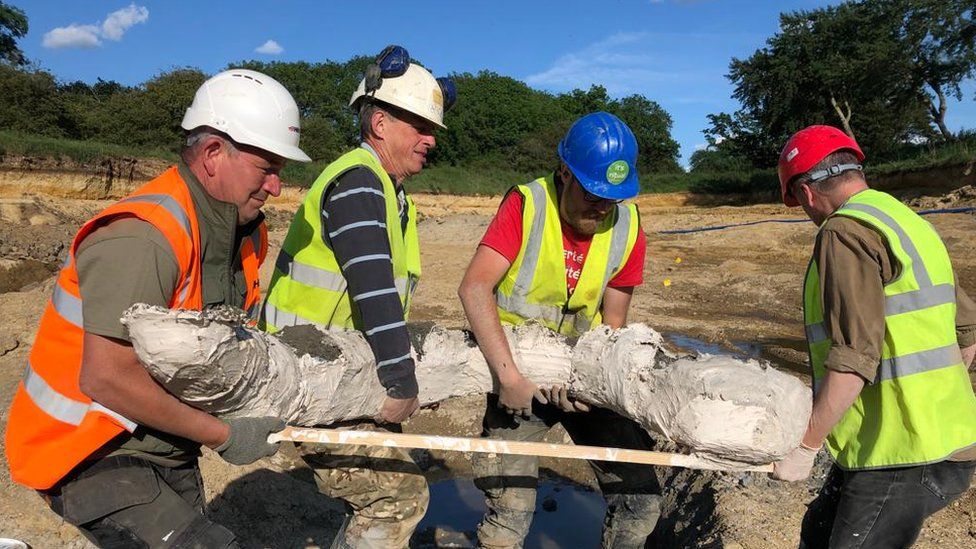 Researchers have unearthed a mammoth “graveyard” filled with the bony remains of five individuals, including an infant, two juveniles, and two adults that died during the last ice age at what is now a quarry in Swindon, a town in the southwest UK.

Experts who unearthed a 200,000-year-old mammoth graveyard say it is “one of Britain’s biggest Ice Age discoveries in recent years”.

Digging at the site began after two keen amateur fossil hunters, Sally and Neville Hollingworth, spotted a Neanderthal hand axe at the site.

Experts from DigVentures, an archaeology social enterprise, then went on to find remains belonging to a species of Steppe mammoth, an ancestor of the woolly mammoth.

The mammoth remains, such as tusks, leg bones, ribs, and vertebrae belonging to a species of Steppe mammoth, a group whose descendants include the woolly mammoth. Although early Steppe mammoths stood up to 13.1 feet (4 meters) high at the shoulders, the five individuals were smaller, according to Live Science.

Delicate beetle wings and fragile freshwater snail shells as well as stone tools from the Neanderthal age were also found at the site.

“Finding mammoth bones is always extraordinary, but finding ones that are so old and well preserved, and in such close proximity to Neanderthal stone tools is exceptional,” Lisa Westcott Wilkins, the co-founder of DigVentures, said in a statement.

According to DigVentures, the crowdsourced archaeological organization in the U.K. that led the excavation, more are expected to be found because only a fraction of the vast site, a gravel quarry, has been excavated.

Research is ongoing to understand why so many mammoths were found in one place, and whether they were hunted or scavenged by Neanderthals.

The site has been dated to between 220,000 and 210,000 years ago, toward the end of an interglacial, or warm period, when Neanderthals still lived in Britain.

The discovery will be featured in a new BBC One documentary Attenborough and the Mammoth Graveyard which will be broadcast on 30 December.