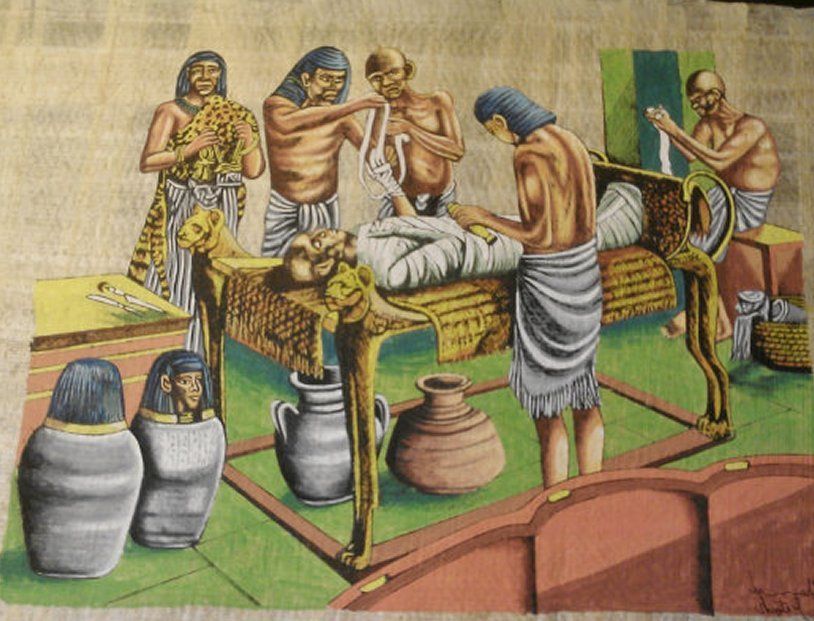 In ancient Egypt, embalming was considered a sacred art, and knowledge of the process was restricted to a few. Egyptologists believe that most of the secrets of art were probably passed on orally from one embalmer to another, so written evidence is scarce; until recently, only two texts relating to mummification had been identified.

Therefore, Egyptologists were surprised to find a brief instruction on embalming in a medical text that deals mainly with herbal remedies and skin edema. The handbook was recently published by the Egyptologist at the University of Copenhagen, Sofie Schiødt:

– Many descriptions of embalming techniques that we find in this papyrus have been left out of the two later manuals, and the descriptions are extremely detailed. The text reads like a memory aid, so the intended readers must have been specialists who needed to be reminded of these details, such as unguent recipes and uses of various types of bandages. Some of the simpler processes, e.g. the drying of the body with natron, have been omitted from the text, Sofie Schiødt explains. She adds:

– One of the exciting new pieces of information the text provides us with concerns the procedure for embalming the dead person’s face. We get a list of ingredients for a remedy consisting largely of plant-based aromatic substances and binders that are cooked into a liquid, with which the embalmers coat a piece of red linen. The red linen is then applied to the dead person’s face in order to encase it in a protective cocoon of fragrant and anti-bacterial matter. This process was repeated at four-day intervals.

Although this procedure had not been identified previously, Egyptologists had previously examined several mummies from the same period as this manual whose faces were covered with cloth and resin. According to Sofie Schiødt, this would fit well with the red flax procedure described in this manuscript.

The manuscript that Sofie Schiødt has been working on for his doctoral dissertation is Papyrus Louvre-Carlsberg-so called because half of the papyrus belongs to the Louvre Museum in Paris, and the Other Half is part of the collection of Papyrus Karlsberg of the University of Copenhagen. The two parts of papyrus originally belonged to two private collectors, and several of them are still missing. According to ancient philology (ie, symbolic form), the six-meter-long papyrus dates back to 1450 BC, which means that it is more than 1,000 years earlier than the only two other examples of embalming text.

Most papyrus, which is the second-largest medical papyrus that survives in ancient Egypt, relates to herbal medicine and skin diseases. In particular, it contains the earliest known herbal treatise, which describes the appearance, habitat, uses, and religious significance of the divine plant and its seeds, as well as an extensive treatise on skin edema, which is seen as diseases, sent on by the moon god Khonsu.

The anti-corrosion treatment was carried out in a special workshop built near the tomb. It lasted 70 days and was divided into two main periods-35-day drying period and a 35-day wrapping period.

During the drying period, the body was treated with dry natron both inside and outside. Treatment with natron began on the fourth day of embalming after cleansing the body, removing the organs and brain, and collapsing the eyes.

The second 35-day period is dedicated to wrapping the deceased in bandages and aromatic substances. The embalming of the face described in Papyrus Louvre-Carlsberg belongs to this period.

The entire 70-day embalming process was divided into 4-day intervals, finishing the mummy on day 68 and placing it in a coffin, after which the last days were spent in ritual activities that allowed the deceased to live in the afterlife.

UNIVERSITY OF COPENHAGEN – FACULTY OF HUMANITIES