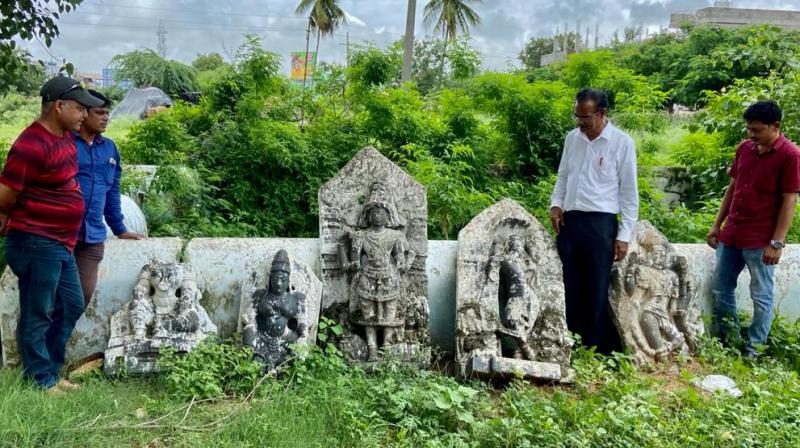 13th-century statues were found near a temple tank in the Siddipet district in the northern province of Telangana, India.

On Sunday, representatives of the New Telangana History Group (NTHG), led by Sriramoju Haragopal, discovered a cluster of 13th-century statues in disrepair beside a temple tank in Duddeda village, Siddipet district.

Dr. Nagireddy went to Duddeda village based on information from NTHG members and revealed that the five sculptures – two Devi statues and three sculptures of Chennakesava, Venugopala, and Bhairava – were from the 13th and 14th centuries and represented the Kakatiya style of art.

He described the Chennakesava sculpture as a masterwork of Kakatiya art, with exuberant ornamentation and traditional iconography, as well as the Venugopala and Bhairava statues.

Dr. Nagireddy said there was an extensive list of inscriptions by Kakatiya Prataparudra, dated back to 1296 AD. Based on the inscription found on the sculptures, he said those sculptures were part of fine workmanship belonging to the flourishing phase of the Kakatiya art in the 13th and 14th centuries. (Deccan Chronicle)

Dr. Nagireddy informed the local people about the historical significance of the sculptures, which were testaments to the Kakatiya sculptor’s ability.

He urged the authorities to save the sculptures for posterity by relocating them within the temple premises ensuring their safety and protection.