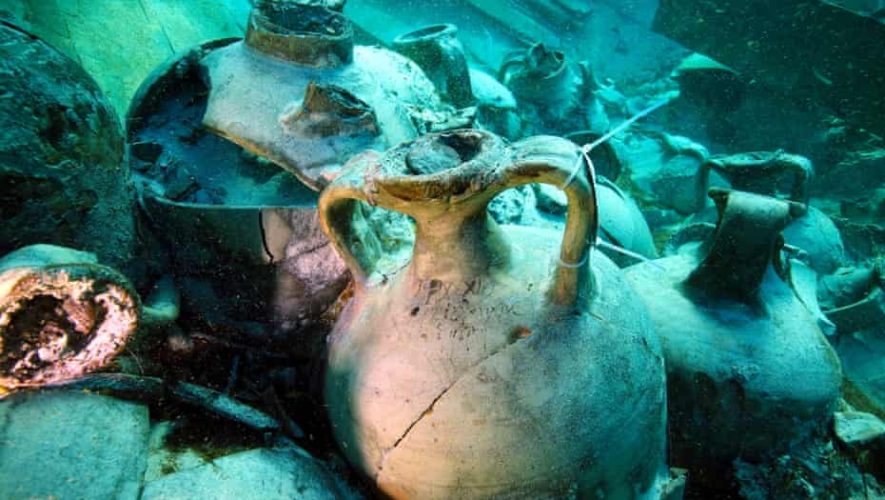 The merchant vessel, probably at anchor in the Bay of Palma while en route from south-west Spain to Italy, One squally day or stormy night about 1,700 years ago, a boat carrying hundreds of amphorae of wine, olives, oil, and garum, was buried in the sands of the shallow seabed.

Despite being barely 2 meters beneath the bellies of the many people that swim off one of the busiest beaches in the Balearics, its marvelously preserved treasures had lay unspoiled until this month.

The boat, which is 12 meters long and between 5 and 6 meters wide, emerged three years ago after a summer storm churned up the waters of the bay. Its appearance confirmed anecdotal reports from divers dating back to the 1950s and prompted the Consell de Mallorca to take action.

A recovery operation was overseen by the island’s governing body, the Consell de Mallorca, and involving experts from three Spanish universities in the Balearics, Barcelona, and Cádiz, has recovered approximately 300 amphorae as well as other objects that provide priceless insights into the fourth-century Mediterranean and the crew’s daily lives.

The boat, now known as the Ses Fontanelles wreck, is now revealing its archaeological, historical, and culinary mysteries.

In addition to the clay jars – which still bear their painted inscriptions or tituli picti – archaeologists have found a leather shoe, a rope shoe, a cooking pot, an oil lamp and only the fourth Roman carpenter’s drill recovered from the region.

“The aim is to preserve everything there and all the information it contains, and that couldn’t be done in a single emergency intervention,” says Jaume Cardell, the consell’s head of archaeology.

“That’s where the project Arqueomallornauta comes in: it’s about recovering and preserving both the wreck and its historical cargo. This isn’t just about Mallorca; in the whole western Mediterranean, there are very few wrecks with such a singular cargo.”

Although the crew is currently considering how to best salvage the wreck’s hull, which sits just 50 meters off the shore, those who pulled up the cargo in an operation that lasted from November 2021 until mid-February are still in awe of what they have discovered.

None of the team had expected the sands of the bay to have done such a spectacular job of sealing the wreck off from oxygen and preserving its organic materials.

“Things have been so perfectly preserved that we have found bits of textile, a leather shoe, and an espadrille,” says Dr. Miguel Ángel Cau, an archaeologist at the University of Barcelona.

The team, who established that the boat set sail from Spain’s Cartagena region by analyzing the minerals in the amphorae’s clay, say it is hard to overstate the significance of the find.

“It’s important in terms of naval architecture because there are very few ancient boats that are as well preserved as this one,” says Dr. Darío Bernal-Casasola, an archaeologist at the University of Cádiz. “There are no complete Roman boats in Spain.”

What’s more, he adds, the amphorae represent an improbable subaquatic archaeological hat-trick: “It’s incredibly difficult – almost impossible – to find whole amphorae that bear inscriptions, and also still have the remains of their contents. The state of conservation here is just amazing. And you have got all this in just 2 metres of water where millions of people have swum.”

For Enrique García Riaza, a historian at the University of the Balearic Islands, the wreck highlights the commercial and strategic importance of the Balearic archipelago during the Roman empire.

“The islands weren’t cut off – on the contrary, they were a fundamental staging post on routes from the Iberian peninsula and the Italic peninsula,” he says. “In Roman times, the cities of the Balearic archipelago had political elites who were also very well connected to the main Roman cities of the Mediterranean coast, such as Cartagena and Tarragona.”

The team has found no trace of the boat’s crew apart from their belongings, suggesting perhaps they made it to the shore or were swept away from the wreck by the waves. What they left behind, however, is intriguing.

Cau points to the oil lamp, which bears an obviously pagan symbol of the moon goddess Diana, and to the Christian signs that appear on the seals of some of the amphorae.

“The crew were probably pagan, but some of the merchandise they were carrying has Christian symbols,” he says. “You have to be careful about how you interpret that – that cargo could have been from an ecclesiastical authority – but you have that coexistence between the pagan and the Christian.

“That may tell us a bit about the daily lives for the crew. They might have said, ‘Look, I’m a sailor and I believe what I believe, but if you want me to carry a Christian cargo, I’m OK with that if the money’s good.’”

With the recovery phase complete and the cataloging underway, thoughts are now turning to put the entire find on the show.

“The idea is to recover the hull, and we are in touch with both national and international experts to make sure it’s properly recovered,” says Cardell.

“The boat needs to be exhibited and people need to see it. At the end of the day, we do archaeology for everyone and not just for the scientists.”

A few weeks after the wreck’s cargo was touched by human hands for the first time in almost two millennia, the archaeologists remain buoyant.

“This is one of those finds when you are just laughing all the time because you can’t believe it,” says Cau. “This is the sort of thing that happens to you once in an academic lifetime. We will never find anything like this again and that’s what makes it so special.”