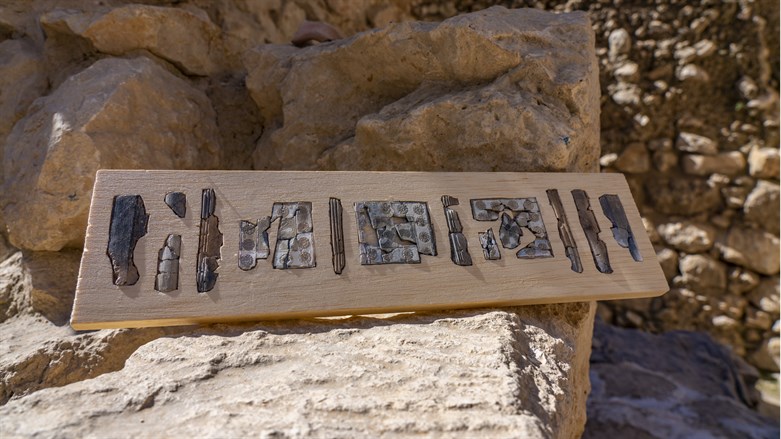 An extraordinary find was made in Jerusalem: an assemblage of ivory plaques from the First Temple period, one of only a few found anywhere in the world and the first of its kind in Jerusalem.

The site contained other priceless objects in addition to the ivories that were found there. Agate, a semi-precious stone, a seal impression bearing the name “Natan-Melech servant of the king,” jars of wine spiced with vanilla, decorated stone objects, and wooden objects that appeared to be a part of larger wooden furnishings were also discovered.

The plaques, which are approximately 2,700 years old, were discovered during excavations at the Givati Parking Lot in the City of David archaeological and tourism site, which is part of the Jerusalem Walls National Park, by the Israel Antiquities Authority (IAA) and Tel Aviv University.

The ivories, considered one of the most expensive raw materials in the ancient world – even more expensive than gold – were discovered among the ruins of a palatial building used when Jerusalem was at its peak of power (the eighth and seventh centuries BCE).

Experts believe that the decorated ivories were inlaid in wooden furnishings used by the building’s residents, who were likely people of means, influence, and power, such as high government officials or priests.

Professor Yuval Gadot of Tel Aviv University’s Department of Archaeology and Near Eastern Cultures and Dr. Yiftah Shalev of the Israel Antiquities Authority (IAA): “To date, we only knew of decorated ivories from the capitals of the great kingdoms in the First Temple period, such as Nimrud, the capital of Assyria, or Samaria, the capital of the Israelite Kingdom. Now, for the first time, Jerusalem joins these capitals. We were already aware of Jerusalem’s importance and centrality in the region in the First Temple period, but the new finds illustrate how important it was and places it in the same league as the capitals of Assyria and Israel. The discovery of the ivories is a step forward in understanding the political and economic status of the city as part of global administration and economy.”

The impressive structure where the ivories were discovered was completely destroyed by a massive fire, which is believed to have occurred during the Babylonian destruction of Jerusalem in 586 BCE, and the ivories were found broken into small pieces and burned.

Ivory is mentioned only a few times in the Bible, always in connection with royalty or great wealth – the description of the throne of King Solomon (I Kings 10:18); an ivory palace built by King Ahab in Samaria (1 Kings 22:39); and the prophet Amos’ castigation of Israelite nobility: “They lie on ivory beds, lolling on their couches” (Amos 6:4).

No less than 1,500 fragments were discovered during excavations as part of the Emek Tsurim National Park wet-sieving project. Only following a unique restoration project led by conservator Orna Cohen and Ilan Naor of the Israel Antiquities Authority, were the plaques restored, and the richness of the collection revealed.

“At the end of the process of joining and ‘fusing’ hundreds of the fragments, we were able to understand that the assemblage includes remnants of at least 12 small square plaques – about 5 cm x 5 cm, at most 0.5 cm thick – which were originally inlaid in wooden furnishings,” Cohen and Naor said.

The decorations on the majority of the ivories were the same, consisting of frames incised with rosettes and a stylized tree in the center. Other plaques had lotus flowers and a geometric pattern on them.

According to Dr. Ido Koch and Reli Avisar of Tel Aviv University, who studied the objects, the rosette and the tree were popular symbols in the Mesopotamian visual repertoire and in other cultural centers.

Ivory objects with similar decorations were discovered in the Samaria assemblage as well as in more distant palaces such as Nimrud and Khorsabad in the heart of the Assyrian Empire. During the Assyrian Empire’s reign over Judah, the Judahite elite adopted these symbols (beginning in the second half of the eighth century BCE).

It’s interesting to note that these three images appeared at that time in Judah as the kingdom’s emblems on both the stone capitals found in Jerusalem’s Armon HaNatziv, Ramat Rachel, and Nahal Rephaim (decorated stone capitals), as well as seals used in the king’s administration (rosette seals were used to stamp jars, marking their contents as belonging to the royal household). What’s even more intriguing is the absence of animal and human mythological figures from the ivory artifacts found in Samaria, Nimrud, and other locations from the Jerusalem assemblage.

“It’s possible that what we have here is evidence of a cultural choice by the Jerusalem elite as to which global symbols to adopt and which to reject,” the researchers say.

The ivories will be on display at the 23rd Conference of the City of David Studies of Ancient Jerusalem on Tuesday, September 13th. They will also be on display in October at the Israel Antiquities Authority’s Jerusalem Conference, Tel Aviv University, and the Hebrew University.