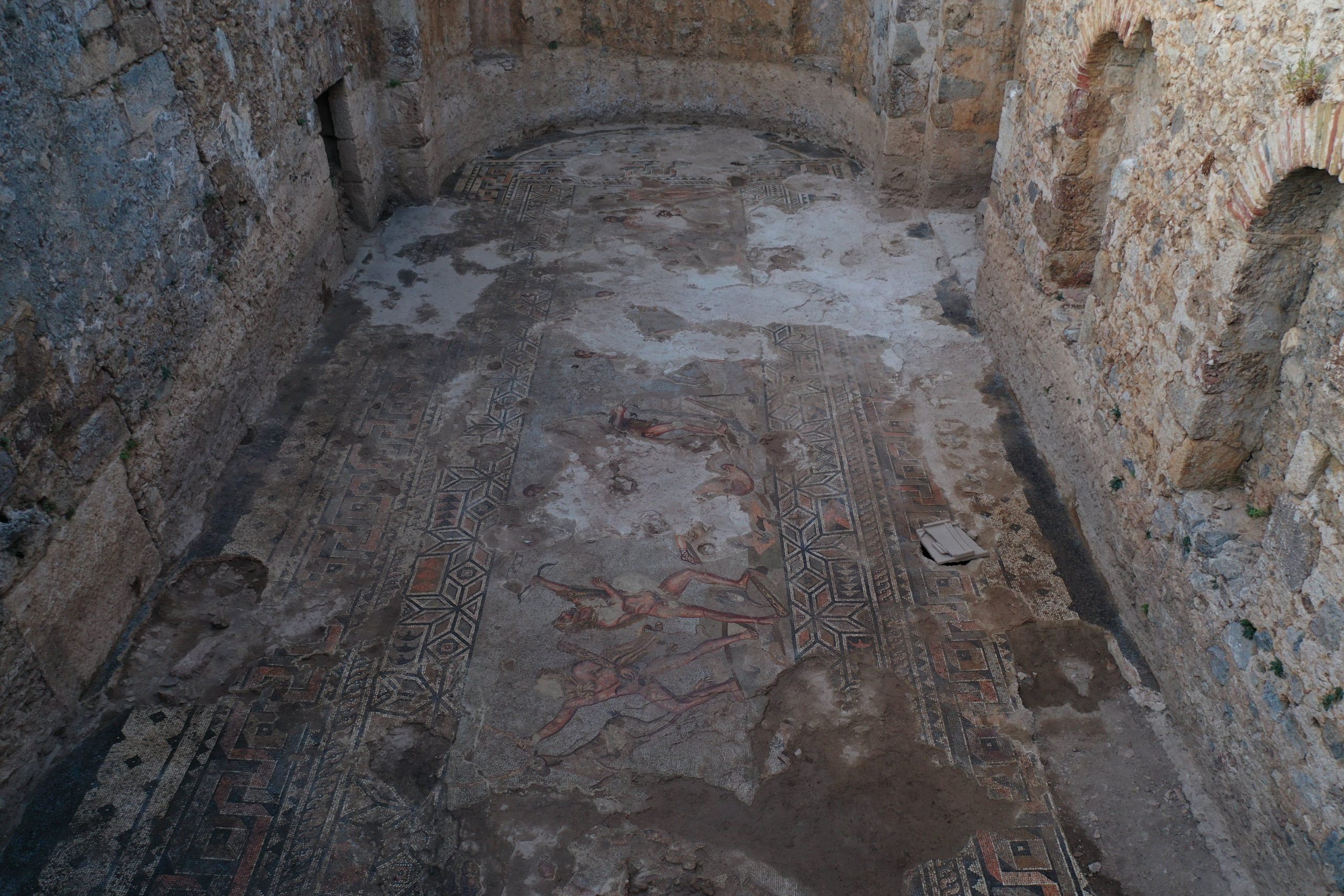 During the excavations in the ancient city of Syedra in the Alanya district of Antalya, approximately 164 square meters of floor mosaic depicting the 12 labors of the mythological hero Heracles (Hercules) were unearthed.

The discovery of the ancient mosaic was announced with a post made today from the official social account of the Department of Excavations and Researchs.

The remains of the ancient city of Syedra are located near Alanya, Turkey’s most famous tourist destination. The ancient city is 20 km east of the city center.

Karamanoğlu Mehmetbey University Faculty of Letters, Department of Archeology Faculty Member and Head of the Syedra Ancient City Excavations head Associate Professor Ertuğ Ergürer told Anadolu Agency (AA) that they have reached very good archaeological data in the studies they have been carrying out in the historical area since 2019.

Stating that the mosaic is very special artistically, Ergürer continued as follows:

“We thought it was unhealthy to fully reveal our mosaic that we discovered in 2019 for that period. After the necessary preparations, we started to unearth our mosaic on the theme of ‘Heracles’ towards the end of 2020. In the mosaic, scenes called the 12 labors of Heracles were depicted and very well preserved,” he said.

Ergürer stated that the mosaic was completely covered with soil in order to preserve it and to obtain better results in future detailed studies.

Expressing that they deemed it appropriate to share with the public that the mosaic was found after the necessary protection measures were taken, Ergürer noted that they continue to work to unearth the mosaic and other artifacts in the area.

Found in the great Roman bath

Pointing out that the historical artifact unearthed in the great Roman bath in the ancient city has no similar, Ergürer said:

The fact that the figures are made in human dimensions also stands out as the only example. In this sense, we are faced with a unique mosaic. The well-preserved mythological scenes in the mosaic add importance to the work.

The fact that the figures are made in human dimensions also stands out as the only example. In this sense, we are faced with a unique mosaic. The well-preserved mythological scenes in the mosaic add importance to the work.

Assoc. Dr. Ertuğ Ergürer stated that the floor mosaic, which is 7.9 meters in width and 21.91 meters in length, is considered to have been made in the 2nd century AD and spreads over an area of approximately 164 square meters.