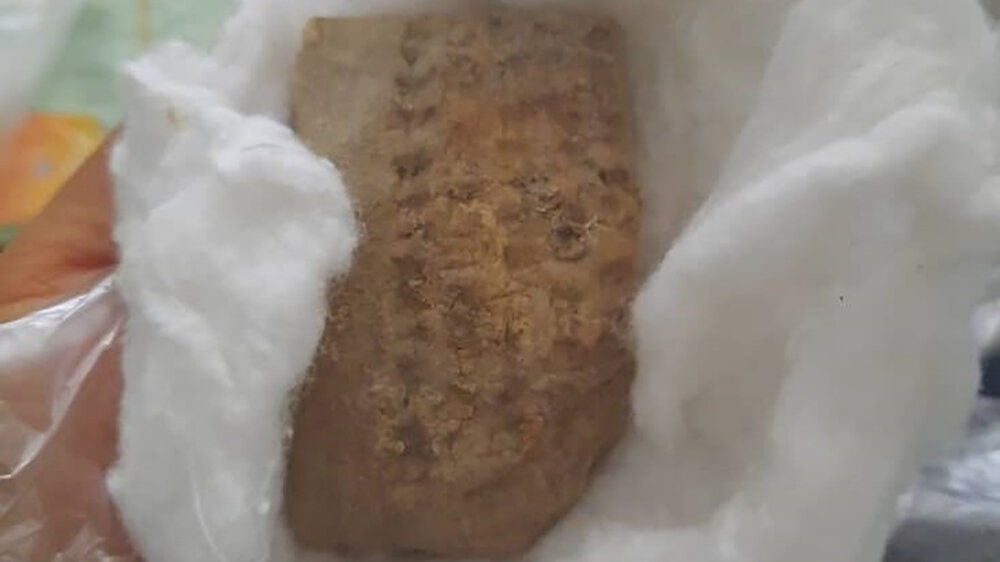 A clay tablet, estimated to be from the Elam period, about 4500 years old, was recently discovered in southwestern Iran.

The clay tablet found in the Ramhormoz district of Khuzestan province is thought to date from about 2700-539 BC.

The tablet which bears cuneiform inscriptions was found during a cultivation process on a personal farm in Ramhormoz county [of Khuzestan province], a senior police official in charge of protecting cultural heritage said on Monday.

“According to examinations conducted by experts of the Ministry of Cultural Heritage, Tourism and Handicrafts, the object has been assessed to date from the Elamite era,” the police commander said, CHTN reported.

The official, however, did not provide further detail about the prehistorical piece of document.

Documents from the second period, which lasted from the 16th to the 8th century BC, are written in cuneiform; the stage of the language found in these documents is sometimes called Old Elamite.

The last period of Elamite texts is that of the reign of the Achaemenian kings of Persia (6th to 4th century BC), who used Elamite, along with Akkadian and Old Persian, in their inscriptions. The language of this period, also written in the cuneiform script, is often called New Elamite.

Last November, French archaeologist Francois Desset publicized that he had deciphered a 4400-year-old cuneiform bas-relief in a study, which he said might be a “cultural revolution” in the history of writing in the world scene.

And this discovery is incredible because until now the oldest writing system from Mesopotamia with proto-wedge-shaped tablets from the Bronze Age around 3300 BC. With the deciphering of this new system of writing, we now know that around -2300 BC.

Another script with linear Elamite existed and that one of its oldest forms, the Proto-Elamite script, is as old as the first Mesopotamian cuneiform texts. François Desset explains that the Mesopotamian Proto-Cuneiform script did not produce the Iranian Proto-Elamite, but that they were actually two contemporary systems that evolved and changed in two different periods.

Elam, located in the region of the modern-day provinces of Ilam and Khuzestan in Iran, was one of the most impressive civilizations of the ancient world. It was never a cohesive ethnic kingdom or polity but rather a federation of different tribes governed at various times by cities such as Susa, Anshan, and Shimashki until it was united during the Middle Elamite Period, briefly, as an empire. The name Elam was given to the region by others – the Akkadians and Sumerians of Mesopotamia – and is thought to be their version of what the Elamites called themselves – Haltami (or Haltamti) – meaning “those of the high country”. ‘Elam’, therefore, is usually translated to mean “highlands” or “high country” as it was comprised of settlements on the Iranian Plateau which stretched from the southern plains to the elevations of the Zagros Mountains.