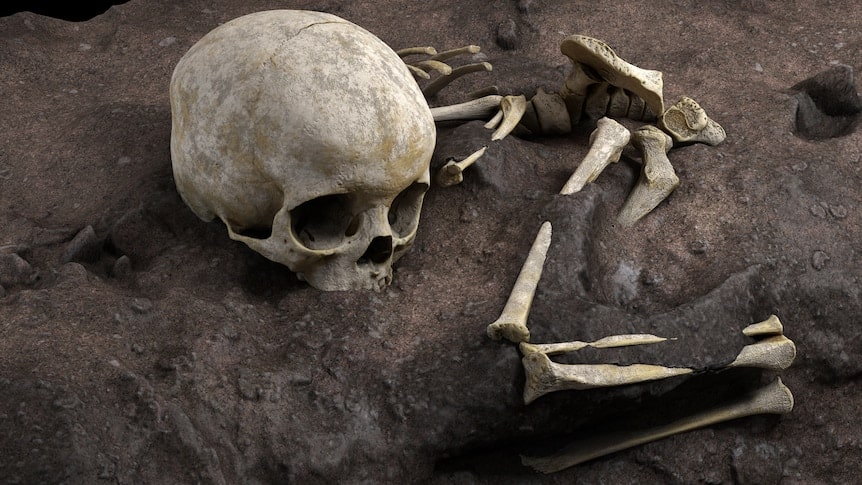 A 78,000-year-old group of bones discovered at the mouth of a Kenyan coastal cave constitutes the oldest recorded formal human burial in Africa.

The remains are those of a Middle Stone Age boy, estimated to be between 2.5 and 3 years old. The toddler’s bones were discovered in the Panga ya Saidi cave complex in southeast Kenya.

The dig has unearthed a treasure trove of historical objects, including seashell beads and thousands of tools that represent technical changes from the Middle to Later Stone Ages.

The scientists named the boy Mtoto (“child” in Swahili).

When archaeologists found the highly decomposed remains of Mtoto, they could not immediately identify them as human. In a study published Wednesday in the journal Nature, scientists from Germany’s Max Planck Institute for the Science of Human History and the National Museums of Kenya detailed how they came to the conclusion, through microscopic analysis of bone and surrounding soil, that the skeleton in a shallow circular depression the cave belonged to a child who was put to rest on purpose.

“Deliberate burial of the dead is so far confined to just Homo sapiens and Neanderthals, setting us apart from all other ancient hominins, and any other animal,” Nicole Boivin, an archaeological scientist, and director of the Max Planck Institute for the Science of Human History, tells me. “Study of mortuary and burial practices gives us insight into the evolution of our own species, our thoughts, emotions and cosmological beliefs, and what it means to be human.”

The deceased were often viewed differently by earlier hominins. For eg, around 300,000 years ago, the archaic human species Homo Naledi seems to have buried bodies in the back of South Africa’s Rising Star Cave. That’s a practice referred to as funerary caching.

In Mtoto’s case, however, evidence of a deliberately excavated pit accompanied by a deliberate covering of the corpse indicates a more complicated procedure. The infant was laid on one side with knees drawn toward the chest as if he or she was being dressed for a closely veiled funeral. Perhaps more striking is the fact that the child’s head seems to have leaned on some kind of support, such as a cushion. That indicates the community may have performed a mourning rite.

The researchers found portions of the bones in 2013, and the burial pit was discovered four years later, some 10 feet (3 meters) underneath the cave floor.

“At this point, we weren’t sure what we had found,” says Emmanuel Ndiema of the National Museums of Kenya. “The bones were just too delicate to study in the field. So we had a find that we were pretty excited about, but it would be a while before we understood its importance.”

Researchers took the plaster casts of the bones to the National Research Center on Human Evolution in Burgos, Spain, for further study.

Over several months of painstaking excavation in CENIEH’s labs, spectacular new discoveries were made. “We started uncovering parts of the skull and face, with the intact articulation of the mandible and some unerupted teeth in place,” explains Professor María Martinón-Torres, director at CENIEH. “The articulation of the spine and the ribs was also astonishingly preserved, even conserving the curvature of the thorax cage, suggesting that it was an undisturbed burial and that the decomposition of the body took place right in the pit where the bones were found.”

The discovery provides a rare glimpse into burial practices on the continent during the Middle Stone Age, which occurred somewhere between 25,000 to 280,000 years ago.

The study was published today in Nature.