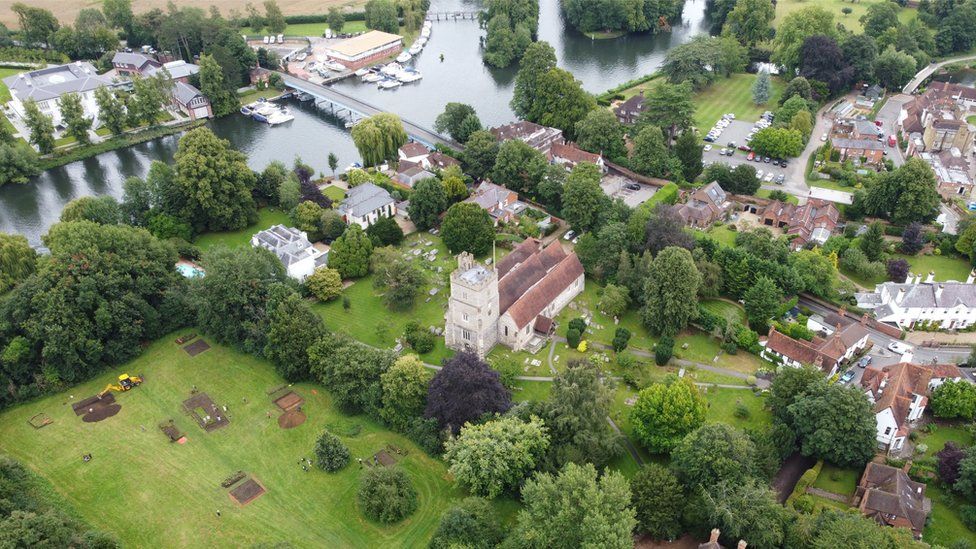 Archaeologists from the University of Reading and local volunteers excavating on the grounds of Holy Trinity Church have made an important discovery.

The team discovered the remnants of timber buildings that would have housed the monastery’s occupants, as well as items that provide insight into their life.

Archaeologists who have found the remains of an 8th-century monastery on the banks of the River Thames say the discovery may give them a unique insight into the life of its ruler, Queen Cynethryth, one of the most powerful women of the Early Middle Ages.

Until today, the actual location of the site in the Berkshire village of Cookham has remained a secret. The location of the monastery had not been found, although it is well-known from contemporary historical sources. It was ruled by a royal abbess, Queen Cynethryth, the widow of the strong King Offa of Mercia, according to written sources.

Dr. Gabor Thomas, Archaeologist, University of Reading said: “By the end of the 9th it was being ruled over by a very powerful royal widow called Queen Cynethryth who was the widow of one of the most powerful Kings of 8th century England – King Offa.

Many historians believe that King Offa was the most powerful Anglo-Saxon king before Alfred the Great. He is most remembered for commanding the construction of the earthen barrier known as Offa’s Dyke on the boundary between England and Wales, which can still be seen today.

After her husband, King Offa, died in AD 796, Cynethryth joined a religious order and became the royal abbess of the monastery. He governed Mercia, one of the most important Anglo-Saxon kingdoms in Britain, which encompassed the English Midlands, until his death.

Cynethryth is the only Anglo-Saxon queen portrayed on a coin, which was unusual in Western Europe at the time. She died after the year 798.

Dr. Thomas said: “Cynethryth is a fascinating figure, a female leader who clearly had genuine status and influence in her lifetime. Not only were coins minted with her image, but it is known that when the powerful European leader Charlemagne wrote to his English counterparts, he wrote jointly to both King Offa and Queen Cynethryth, giving both equal statuses.

Dr. Thomas also added that this is probably the queen’s final resting place. Archaeologists hope the discovery of the monastery Queen Cynethryth presided over will give them a unique insight into her life and times.

The team uncovered a plethora of evidence, including food remnants, pottery vessels used for cooking and dining, and pieces of personal clothing, such as a beautiful bronze bracelet and a dress pin, which were most likely used by female members of the society.

There is clear evidence for the monastery’s layout, which was arranged into a number of functional zones delineated by ditched borders. One of these zones appears to have been used for habitation, while another appears to have been utilized for industrial activities, as evidenced by a cluster of hearths that were most likely used for metalworking.